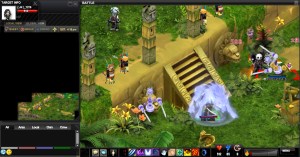 Gaia Online has built one of the biggest online hangouts for teens over the past five years. Think of it as an online shopping mall full of kids who express themselves through cartoon-like avatars. Today, it is taking the hangout one step further by revealing the details of a more elaborate, connected virtual world with its own storyline and missions.

The company’s Gaia Online site already generates 3 billion monthly page views and has more than 5.9 million unique users a month. While there are a dozen different things you can do when you log into Gaia Online (like meet other teens and play casual games), the place is currently not a single, continuous world.

That’s going to change in the late summer as the company rolls out its “massively multiplayer online” (MMO) game, said Craig Sherman, chief executive of the San Jose, Calif.-based company. Users have been demanding this game as the top thing they want for a couple of years.

The pattern with Gaia Online’s evolution is similar to what happened with the evolution of competitor WeeWorld. At first, WeeWorld enabled teens to create their own characters, or avatars, which were called WeeMees. Last month, the company went a step further in unveiling a WeeWorld virtual world. Gaia Online’s other competitors, Sulake’s Habbo and IMVU, also operate a series of user-customized rooms where users can chat, but not continuous worlds. (See our IMVU coverage).

The evolution of these communities makes them difficult to classify. You can play games or you can watch a movie in a virtual theater. Hitwise said that Gaia Online was the No. 2 virtual world in May, next to Webkinz. But Sherman said that Gaia Online is more a cross of a social network and a game.

It’s more expensive to maintain such games. But it’s not as hard for Gaia Online to make the leap to an MMO because it has simple two-dimensional avatars and background environments, not high-resolution 3-D graphics as with IMVU or Second Life. Gaia Online’s software runs in a browser and is based on simple Adobe Flash animations.

“We think we did this the right way by starting it as a social experience first,” Sherman said. “Now we’re adding the world that goes with it.”

David Georgeson, senior producer at the company, heads a team of about 15 developers in San Jose who have been working for the past year on the PC-based MMO. Gaians, as members are called, can use their existing avatars as their characters in the virtual world

Characters can put on rings that they find in the world in order to gain special powers. The characters can then explore the world or engage in combat against creatures in the world, which is populated with inanimate objects such as mushrooms or lawn-ornament gnomes that have come to life.

The world has a number of towns where players can peacefully explore and interact. They can, for instance, gather around a fountain and listen to a melody and then try to replay it as a group, as in the old “Simon” game. The further they get away from the towns, the more they engage in combat. Players can take the items they win after successful combat and then sell them in the towns or use them to build virtual goods. (Virtual goods sales are one way that the company makes money on the free online hangout).

The characters can engage in deeper adventures and follow a storyline from beginning to end with groups of friends. But Georgeson views it as a “light MMO,” or one that is casual enough in its game play for people to play a little bit at a time and not all-consuming like fantasy role-playing games such as Blizzard’s “World of Warcraft.” Over time, Georgeson’s team will release more and more environments, goods and other content for the world.

Gaia Online started in 2003 as a place where kids could go to enjoy comics. The community has blossomed into a virtual community, with a dozen stores, 37 Adobe Flash-based games, and an eBay-like market for virtual goods. There are a half million new posts daily in the site’s community forums. And Sherman said Gaia Online is the No. 2 art community on the web with 100,000 virtual goods auctioned daily. On a dollar basis, about $1 million in virtual goods transactions take place each month. Sherman said those stats show that it is a more active place than many of the biggest social networks.

After the MMO launches this summer, Sherman said the company will move on to the next thing that its users want: virtual pets.