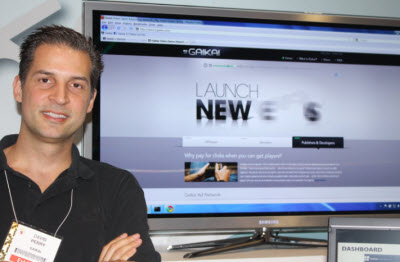 Gaikai chief executive David Perry said his company has finally launched the long-awaited beta test of its cloud-based gaming technology that promises to stream video games to any computer.

Perry (pictured) said in a blog post today that the company has sent out more than 11,000 invitations this week so that users can play games that are stored and computed on servers, not desktop computers or laptops. Much like rivals OnLive and Otoy, Gaikai has been working on the server gaming technology so that it can bring new kinds of business models and distribution methods to the game industry.

With Gaikai, Perry plans to make money by letting game publishers embed its technology on their web sites. The game companies can post demos of their games on any site. Gaikai gets paid based on the number of minutes users spend playing game demos. That plan is very different from OnLive’s, which makes money by selling games via its digital distribution network. OnLive launched its cloud-based games on demand service in June.

The initial users are playing Mass Effect 2, a hit game that Electronic Arts published earlier this year. But Perry says that is just the beginning of a bunch of EA games coming soon. With other publishers, more than 60 games are in the pipeline. Linden Labs’ Second Life virtual world is among the properties that will tap the Gaikai technology. Second Life loses lots of potential users because people don’t want to download its client software; with Gaikai, users could play a browser-based version of Second Life that doesn’t require any download at all.

Players can register for the invite-only beta on the company’s web site. Gaikai is testing 15 of its 24 different data centers. The company, based in Aliso Viejo, Calif., is testing just where it needs to have data centers so that it can have worldwide coverage. Over time, through a partnership with Limelight Networks, Gaikai expects to have 300 data centers.

Perry said in an email that he believes Gaikai has the fastest cloud-based game streaming network. But Gaikai has definitely been slow at getting off the ground; Perry originally promised the beta testing would open up in late summer.