Galactic Civilizations III is a standout example of a strategy game that casual 4X players like myself could easily miss.

Developer and publisher Stardock Entertainment does not have the marketing prowess to plaster ads with logos and branding to gain public awareness at the level 2K achieved with Civilization: Beyond Earth, which is unfortunate. While I did thoroughly enjoy the warfare and diplomacy on new planets in Beyond Earth, it was, in many ways, a Civilization V reskin. My idea of going truly “beyond Earth” would involve traveling among the stars and colonizing several planets rather than one planet per play session. The 30 minutes I had with Galactic Civilizations III left me with enough optimism that Stardock’s next 4X strategy game would satisfy that space-faring itch.

The 4X genre has grown and matured to the point that many fans are not interested in conquering an expanse of space through warfare. You can achieve victory in several ways in Galactic Civilization III, which isn’t surprising for the genre, but I’m always appreciative when games do not try to steer you to one type of win condition even before you’ve started your first turn. 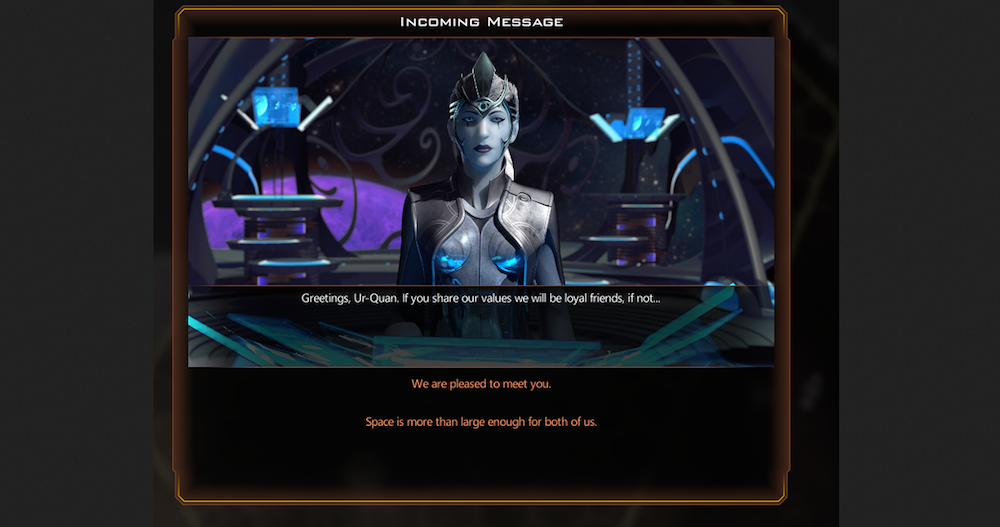 Above: You’re never short of opportunities to impress and disappoint alien races.

Galactic Civilizations III is a game of randomly generated star system configurations in every playthrough. Abstract planets are ripe for research into new technologies, and aliens are expanding and exploring as well, opening up diplomatic opportunities. It might be a lot to take in for those who only play 4X games occasionally, but Galactic Civilizations III still sticks to basic exploration fundamentals. That includes sensibly expanding into an area you can manage and defend with your current resources. Conversely, haphazard growth can easily leave you open to attack.

While this is the first Galactic Civilizations game I’ve played, I understand that it’s a leap in gameplay fundamentals over the previous installment. It’s a case of making this 4X strategy title less of a complex board game and more of a sandbox simulation, one with exponentially more variables to consider. I’m picky about my sandbox experiences since it can be both overwhelming and time-consuming, but it’s hard not to get caught up in the possibilities and outcomes of exploring Stardocks’ galaxies.

I’ve always appreciated 4X games that give you the opportunity conquer a map without firing a shot. In Galactic Civilizations III, placing starbases in the right spots helps spread culture, even if it’s a commercial product like the game’s version of Coca-Cola. Provided your diplomatic ability is high enough, a faction might want to join you; if it’s too low, they might see you as a nuisance. It’s a bit insidious, which is why it’s also challenging. In order for your culture to have any impact, resources have to be pulled away from military; you’re never short of value judgment opportunities. Speaking of resources, Galactic Civilizations III also features a streamlined approach to unit-building. Rather than using multiple planets and outposts to build ships, planets feed their resources into just a few shipyards. 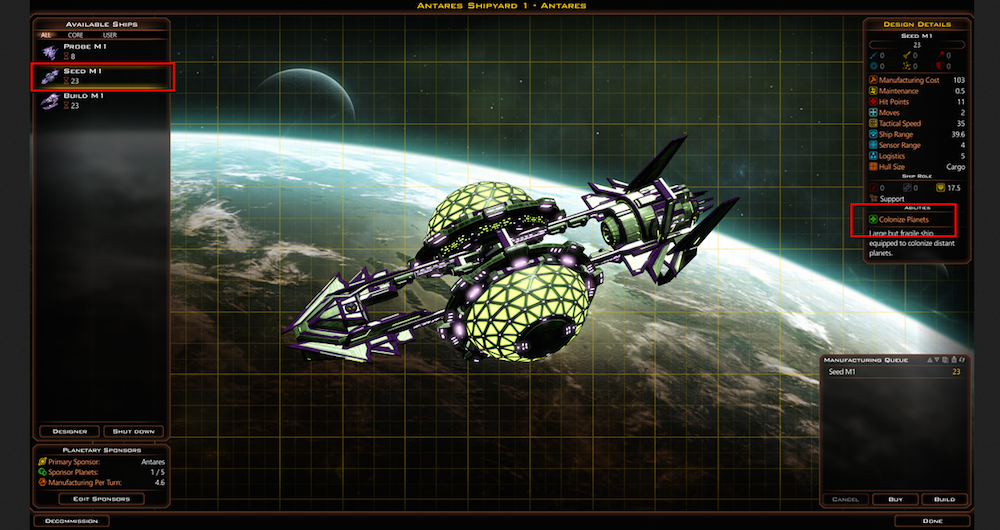 Above: You’ll want to establish a shipyard early in order to gain a foothold on the rest of the galaxy.

As a game that promises engagement on both a micro and macro scale, I shouldn’t have been surprised that ship-building in Galactic Civilizations III is wholly engrossing. Being able to put together a cruiser from an assortment of predesigned parts is easy; the challenge comes in making your space vessel aesthetically pleasing. After looking at a few ships that were put together within seconds, it was easy to tell that Stardock’s art department is not bereft of talent. Whether you’re an Alien fan looking to remake the Nostromo or you’re crazy about adding wings to a ship inspired by shoot-em ups, it’s harder to make a bad-looking ship than a good-looking one in Galactic Civilizations III. It gives you and friends the illusion that you know what you’re doing even if you’re simply enjoying the experimentation of attaching seemingly random parts together.

Like every well-made 4X game, it’s always better to know what you want ahead of time so you can focus your energies in those goals. In the case of shipbuilding, it’s never too early to research large hulls, especially if you have an aggressive campaign in mind, militaristic or otherwise. From railguns to new alloys, it’s best to know what options the game provides as you commence your technological research. And many parts are race-exclusive.

One of the big draws of 4X games is the uncertainty of the best laid plans coming to fruition. This is why I’ve long since accepted the likelihood that any play session with have an outcome I could not have predicted. Between the fog-of-war map concealment and the numerous variables beyond the players control, the ability to adapt is the best skill you can have in this genre. In a given playthrough, my aspirations to expand my territorial boundaries might become secondary when I realize I have a better chance at success in growing my cultural influence. Galactic Civilizations III sounds like the kind of game that not only encourages adaptation but also keep you engaged even after you’ve discarded your initial plans of galactic conquest. 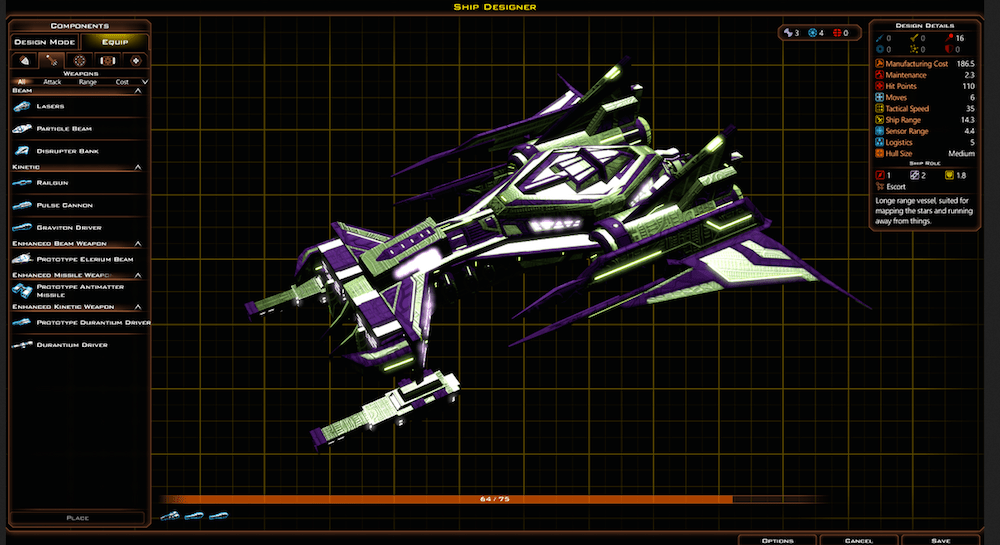 Above: You might be surprised how quickly you can build a ship worth sharing with friends.