Richard Bartle became famous in game circles in the 1990s when he identified the four basic players in online games: killers, socializers, achievers, and explorers. Those categories held up extraordinarily well, and it helped game developers design their games with those four audiences in mind.

Now, he’s thinking about why players drop out of games, and he made a presentation about the subject at the recent Gamelab event in Barcelona, Spain. If he figures this out, he could help the entire game industry figure out how to change their games and make a lot more money, too.

The ideas are hypothetical at this point, and he jokingly said he thinks others will shoot them down in flames. But Bartle came up with an interesting array of reasons why players quit playing games. Games might be too easy — or too hard. Players might see too many flaws, or they might see a better game come along. They may have failed to engage with an experience because it was boring; it had no story; it was too complicated; or many other reasons. Here are the slides from his talk.
[slideshare id=77892692&doc=gamelab13-170715004031]

Some games may be easy to play but too deep. Others might be superficial and hard to play. Some players might want an endless amount of content, but others might see that as a grind and would rather get to the end of a meaningful story.

Bartle believes there are sweet spots that developers have to hit, achieving the right balance for every single gamer in a way that keeps them challenged and prevents them from being too frustrated. I spoke with him about his ideas in the speech afterward. 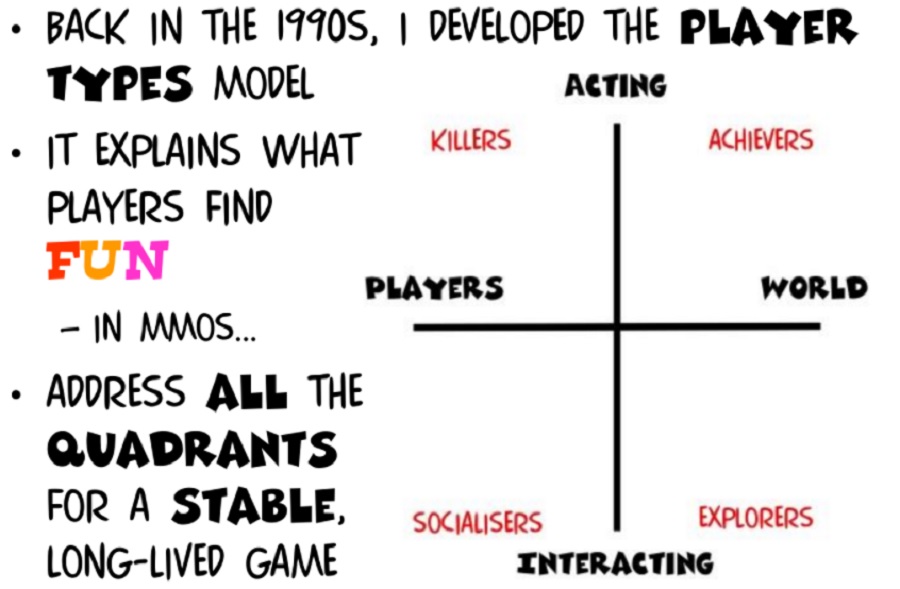 Above: Richard Bartle came up with his model for player types in the 1990s.

GamesBeat: It’s interesting that you have something very methodical again.

Richard Bartle: There’s no numbers there, no statistics. It’s all from observation. I haven’t gone out and interviewed lots of people and created a model. I haven’t written any cluster analysis and discovered anything. It’s just a thought experiment, and with all thought experiments, it’s easy to shoot down because there’s nothing to back it up. That was the case with the original player type theory, and it’s the case with this. But I don’t mind if it gets shot down. The main thing is, to shoot it down someone needs to think about it. They’ve thought of a better way of doing it, and that means we get better games. I want better games. Win for me.

GamesBeat: The original has held up pretty well.

Bartle: Yeah, I was quite surprised. I thought it would be down within six months. I thought someone in the social sciences would look at this and say, “This is rubbish.” Then, they’d go and do analyses and come back saying, “This is what it is.” Nick Yee has looked at it in a lot of detail, done the statistics and cluster analysis. He’s come up with nine or so facets or whatever he calls them, nine different motivations. But they do map on to player types, except for immersion, which maps on to progress through player types.

I’m quite surprised that it has held up. The reason I wrote the paper wasn’t to say, “These are the four player types.” It was to say that people play for different reasons. Don’t just make a game for yourself. Make a game for people to play, not just you to play. That was my point.

GamesBeat: If it’s easy to take a hard line, I guess that’s what people call flow?

Bartle: Yeah, it is flow. If the flow graph looks the same as challenge and skill — if your skill is matched with the challenge being offered to you, there’s a chance you can enter the flow state. But there are other things that have to be true as well for the flow state to occur. That graph you saw there is pretty well the one you see in every single flow paper, referencing [Mihaly] Csikszentmihalyi. That’s uncontroversial, but you’re right. Flow isn’t a condition. You can have just the right challenge for just the right skill. Whether you’re in flow or not doesn’t matter for what I was saying. It’s mainly, if you’re out of it, what happens? If it’s too hard or too easy — in the middle, that’s where the game is giving you just the right challenge. 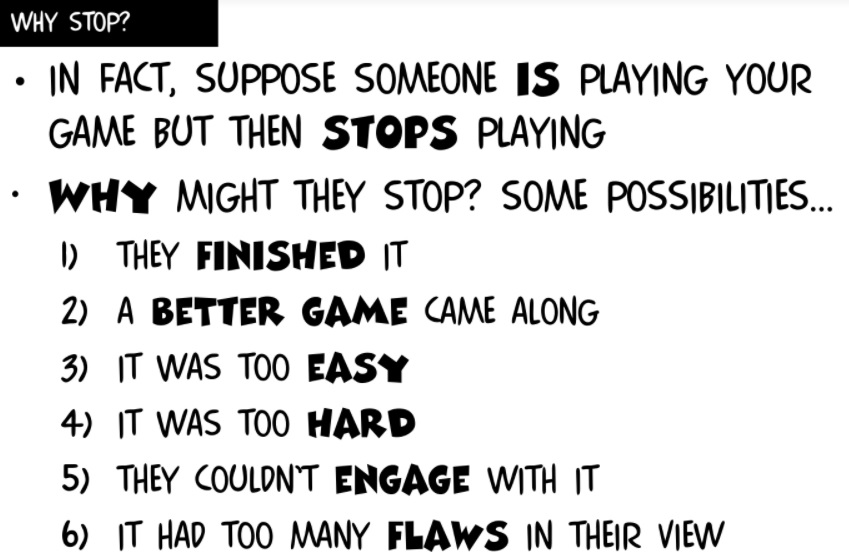 Above: Richard Bartle speculates about why players might quit games.

GamesBeat: Does it seem like that’s a delicate, thin line? Can you overshoot it easily?

GamesBeat: That seems to suggest that these gradients they have in games — easy, normal, hard settings — are just good ideas. You lose fewer players.

Bartle: Right. Whenever you see the diagram, it always has the challenge and skill, but there’s never any number at the bottom, so it doesn’t say what it means if you have a skill of seven or whatever. For individuals, you always see that line at 45 degrees, but some people might like a harder game, in which case it would be a steeper curve. Even though your skill might not be up to it, even if it might be giving you a very hard challenge, that might be what you want.

Other people, or even the same person at a different time — say you’ve just come back from work and you want an easier game, one with a shallower curve. “I can beat this, but I want to play this game while I watch TV, so I don’t want it to be too hard.” If the game has dynamic difficulty adjustment and makes itself that 45 degree angle regardless of how I want it — that’s why I much prefer to be able to set your own difficulty. That gives the player the choice.

Bartle: And some players like both. Some stories are meaningless and some gameplay is meaningful, though. That vertical line is the bit where I expect most of the criticism to come against, that and, “You ripped off Csikszentmihalyi.” That vertical line and all this arty stuff about what the game’s saying to you. But if you’re playing a game and you really don’t get it — you might be thinking, “I’m winning. I seem to be doing well, but I don’t know why.” Am I building a train network? Is this some kind of resource thing? You just don’t get what the game is trying to say.

Sometimes, a game isn’t trying to say something. It’s just a mechanic, which might be an interesting mechanic. I quite like Rogue, but it isn’t saying much apart from, “No matter how hard you try, you’re going to lose eventually.” 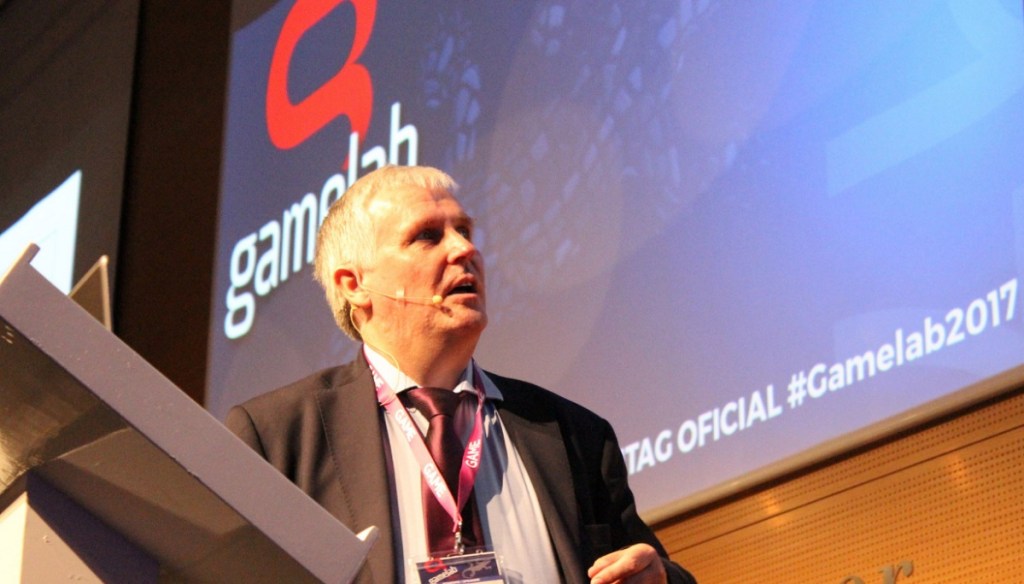 GamesBeat: This theory should explain a lot of different player behaviors or decisions. One that I was wondering about — like with copycat games. An RPG can be extremely complex, but I look at it and say, “This is just a Tolkien knockoff. I don’t want to play it.” It might be very complicated, but….

Bartle: “Complicated” can just have to do with how hard or easy it is. For you, that game could be too shallow. You want something meatier. You think, “I know this game. I’ve played this game before under different names.” A Japanese role-playing game might have 120 hours of content, but it’s all going from A to B to C, and if I’m interested in the story, I can just look it up on Wikipedia.

GamesBeat: Even complicated games can appear to be shallow.

Bartle: Yes, they can. Why am I grinding here? It’s really hard to kill all of these monsters. I have to kill a thousand furballs, but what’s being said here? When you think about what’s being said, it’s either, “We don’t have any content, so we’re making you grind,” or it’s, “We’ve given you the grind in order to make what happens afterward feel better, feel like more of an achievement, feel like it’s worth something.” It’s not until you get through the grind that you figure out which one it was.