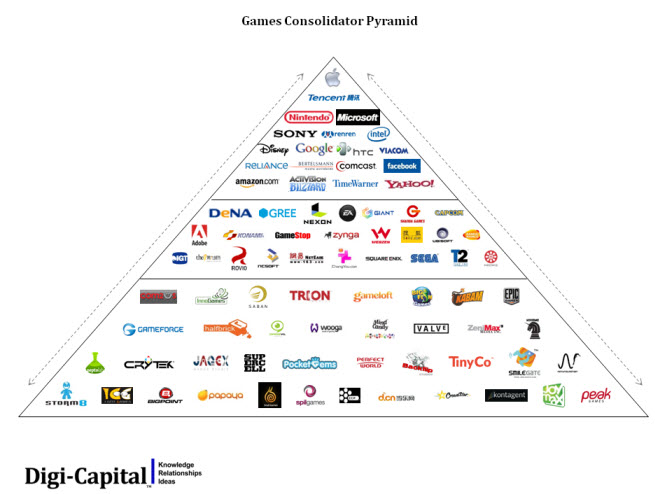 The data shows that games have become a dynamic industry on a global stage, but investments in new companies are down for a variety of reasons. Those startups have become the fuel for growth at the larger companies, which are adapting to the new age of digital games through strategic acquisitions.

Zynga’s rapid growth in the past few years drew the attention of big companies, including ones in China, South Korea, and Japan. But Zynga’s fall in the stock market, brought on by weak earnings, crushed the value of all game companies, resulting in smaller transactions. On top of that, Tim Merel, the managing director at Digi-Capital, said that venture capitalists almost abandoned their investments in social-game companies. Social-game investments accounted for 94 percent of the decline in overall investment. Merel warned there could be a “games investment gap” in the medium term.

Digi-Capital estimates that the total industry could grow to $83 billion by 2016, with 57 percent of that revenue produced by online and mobile games, compared to 49 percent in 2012.

If you add up the returns of the game business by combining acquisitions and initial public offerings, the numbers from 2005 through 2012 add up to a six-fold return. As for acquisitions, the number of deals were down 27 percent to 83 transactions in 2012. But the overall figure rose because the average transaction size rose 60 percent to $49 million. More and more of the buyers are in Asia, as seven of the top 10 deals involved buyers in South Korea, China, and Japan. Digi-Capital believes China could take 32 percent market share in online and mobile games, compared to 21 percent for Europe.

For game investments, the average transaction value was down 57 percent, but transactions were up 9 percent to 165. That might be because more mobile-game studios were funded, but the dollars needed for such studios are much smaller. The average size of an investment was $5 million, down 60 percent. 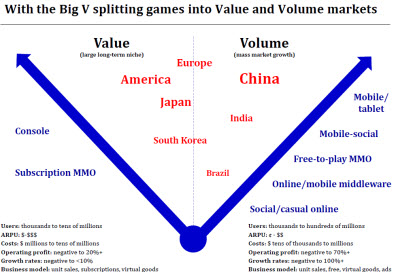 Kickstarter, meanwhile, complemented VC investments. The crowdfunding site account for 6 percent of all investment ($49 million, excluding board games). Kickstarter was 63 percent focused on PC games and 23 percent on hardware. About 87 percent of the value was in just 7 percent of the projects, such as Ouya, which raised $8 million for its Android game console.

Merel said that there was significant volatility across individual game sectors. The potential exists for the “mispricing” of both public and private game market assets in 2013.

As the market shifts toward digital games, Merel believes development will switch from a focus on producing one big hit to investments in multiple, low-cost parallel efforts. Companies will abandon failures quickly and move behind hits fast.

On the highest level (see picture at right), Digi-Capital sees games shifting toward high-value titles in the West, particularly in the U.S., along with the rise of subscription MMOs and console games. Meanwhile, Asia will diverge into a high-volume market, with China leading the development of mobile/tablet games, free-to-play titles, and casual online titles. 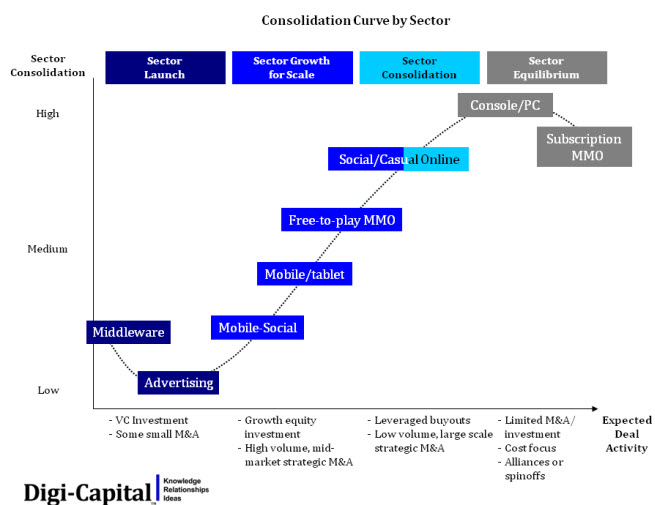