The Comic-Con International event in San Diego, Calif., is the next big trade event for gamers and comic fans. And industry companies should know that these events are increasingly drawing important attendees and generating billions of dollars in economic impact, according to a study by Eventbrite.

The global ticketing and events company released a study of 2,000 fans today exploring the demographics and spending behavior of attendees and “cosplayers,” or those that dress up like their favorite comic or game heroes at conventions and other shows.

The survey results are up for discussion during Rob Salkowitz’s (author of Comic-Con and the Business of Pop Culture) panel “The Future of Fan Culture” at 3:30 p.m. on July 12 at Comic-Com. In a statement, Salkowitz said that fandom conventions have exploded from “nerd niche to peak geek” and have an economic impact in the billions of dollars. 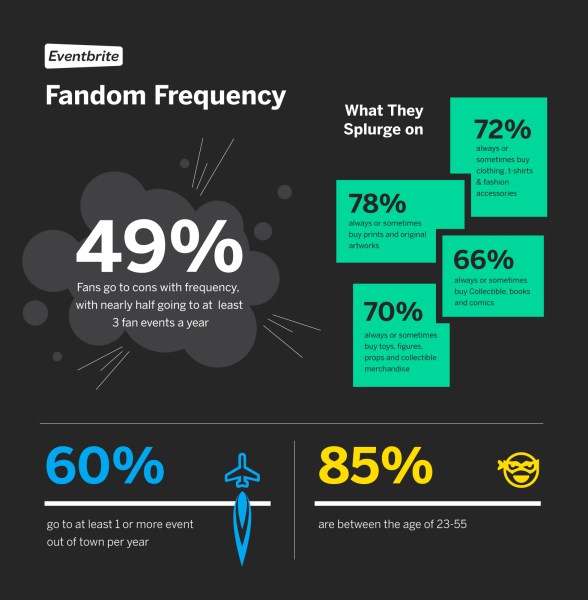 Above: Eventbrite says that 49 percent of con fans go at least three times a year.

Salkowitz said that event planners should be aware of the trends. Notably, the fans are now equally male and female, as 48.9 percent of survey respondents were female, 48.7 percent were male, and 2.4 percent were classified as “non-binary/other.”

The majority of respondents (59 percent) said they spend between $100 and $500 at fan events they attend, not including basic costs such as tickets, food and, parking. They usually buy original art and prints (37 percent), toys, figures and collectible (28 percent), fashion merchandise and T-shirts, and collectible comics and graphic novels (both at 27 percent).

Contrary to anecdotes, however, only around 20 percent of people reported that they regularly purchase celebrity autographs at conventions. With nearly 38 percent reporting they “never buy” these items, they ranked among the least popular purchases according to the survey data.

Survey findings also revealed that 10 percent of con-goers reach into their wallets spend more than $500 at fan events. More men than women (66 percent vs. 33 percent) spend $500 or more at fan events.

Primary fan interests for cosplayers are unique to that group as well. The top three interests reported by cosplayers were anime/manga (29 percent), comic and genre-based media/entertainment (21 percent), and science fiction and/or fantasy (18 percent).