GamesBeat: I guess this is where the metaphor seems to pay off? You’re conquering your demons or emerging from hell.

Antoniades: This is all spoiler territory, but the darkness came from an idea her father gave her, that she was cursed. And she’s let go of that idea, of the darkness. That doesn’t change the fact that Dillion is dead, that she hears voices that are always going to be there, that she sees visions that are always going to be there. But she can let go of the suffering caused by the idea that it was her fault.

The important thing that some people have gotten wrong, and I don’t know why they’ve interpreted it that way, is that she’s somehow cured at the end. She’s certainly not cured in the sense that her psychosis is gone.

GamesBeat: Hela, the goddess, does she represent something in particular? Was she just one of the last obstacles in Senua’s way, or does she mean something more?

Antoniades: Hela is the Norse goddess who was half flesh, half black. Her mother was burnt at the stake, and she was half burnt, hence the black ash. From her has emerged the darkness. She’s conflated a lot of the mythology of the Norsemen with memories she’s had. The concept of the darkness is wrapped up in that.

There are visual metaphors in the game. It’s not quite — I think one thing I learned with the way people perceive the world is they make a lot of associations. A lot of things are linked. This is something that Paul could describe much better than I can, but you see signs everywhere. You link things that seem to be disparate in meaningful ways. There’s a lot of symbolism throughout the game that’s linked in some ways. But it’s never so clear that you can go, “Aha, that’s definitely it.” It’s lots of associations. It feels like you’re just on the edge of solving the puzzle, but it’s not quite nice and neat and bow-tied.

There is meaning behind why Hela looks the way she does, what she represents, why the ending has the concept of death and rebirth. I think it’s more interesting if that stuff is left up to interpretation. There is a logic behind it. 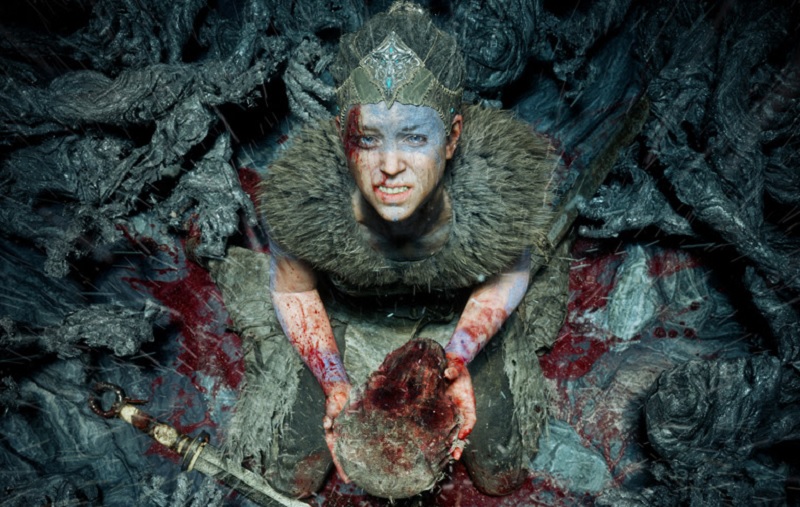 GamesBeat: The realizations that Senua makes at the end, they include recognizing that Dillion is gone. He can’t be brought back. And she isn’t cursed, as her father had said.

Antoniades: Right. It’s an idea, a reality that her father put in her head. Dillion nearly broke that idea. He had a competing idea, which was that she’s not cursed, not at fault. When Dillion died, her father’s reality took over and dominated her. It took this journey to come back to Dillion’s reality, if you like, and reject her father’s reality.

GamesBeat: I did wonder why she had to have such a cruel father and why Dillion had to die, but it seems like these are the things that turned her psychosis into something negative.

Antoniades: Yeah, yeah. Her father was — I see him as someone who — he was a Druid, and the Druids had a lot of power in Celtic society, more so than kings. He’s a seat of power. What he says goes. He speaks for the gods. This is another version of reality that he’s living in. I think the game does touch on these ideas of people’s versions of reality and how they affect other people’s lives. He thought he was speaking for the gods, that he had to maintain control over her, that he had to banish this curse. It’s not necessarily that — everything he did to her was evil, for sure, but he had his own internal logic behind it all.

GamesBeat: The story in some ways a little confusing, I think because it was told in flashbacks. I had trouble placing — oh, this is why she’s gone off the edge.

Antoniades: That was on purpose. When we remember the past, we don’t remember it as a nice, neat, linear story. We remember moments and fragments of our past. The structure — I felt like making everything neat and tidy and linear in terms of the story didn’t matter. These are the events that shaped her life. There are moments that are out of order in terms of time that I was worried about, but most people’s experience is that it doesn’t matter what order they were in, unless they want to work it out. You can work it out. But these are the moments that shaped her character. Although it might be confusing, you get the picture, I think.

GamesBeat: Did you mean something in particular by “other adventures?” Do you imagine a sequel to this?

Antoniades: Just before she says that, she remembers the voice of her mother or hears the voice of her mother saying, “Remember what it was like to be a child, where every day is a new story.” And so, she remembers that and then says, “Come with us, there’s another story to tell,” meaning there’s another day to live. It was more about that. I must admit it does come across like, “Oh, here comes the DLC,” but that’s definitely not what the intention was. I mean, I don’t know what’s going to come next, honestly. I do not know. 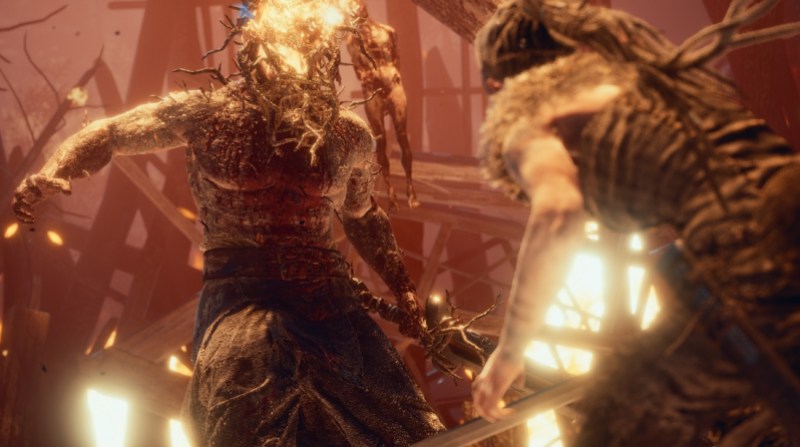 Above: I defeated this sort of character maybe 50 times in Hellblade.

GamesBeat: How did you settle on the sword-fighting style, by the way, where you banish the same demons over and over? Did they also represent something in some way, the pattern of fighting those characters?

Antoniades: Hmm. I don’t know. The main thrust of the combat was to make it feel dangerous. Even though you can dispatch lots of enemies quite easily, the feeling of peril always had to be there. The fact that they look more demonic than Vikings — I imagine them kind of like — what was that movie? A British movie? The Wicker Man, where everyone has animal masks and it’s all quite pagan. I imagine something paganistic like that.

But for it to be never sure whether what she’s seeing is a real person or an exaggeration of a real person — the idea is that they are as she sees them in her mind. They’re bigger than a normal person. They’re more demonic, like the guy with the fire head. They’re more demonic than they would be in “real life,” if you like. And then, the final battle should feel a bit like a fever dream, like an endless nightmare.

Some people interpret the demons as all being in her head, and some people say that maybe that’s just how she sees real Vikings. I think either of those is a valid interpretation. I prefer to think of them as real people.

GamesBeat: Has the game sold well for you, though, given your expectations?

Antoniades: It sold better than our expectations. We’re doing one more dev diary where we’ll give out numbers and detail how it’s done. We want the data out there so other developers, if they want to do something similar, they have a data point, hopefully, to help encourage them to do more games like this.

I think it’s almost broken even, or it’s about to break even in the next couple of weeks. I’d have to check. We weren’t expecting to break even for six, eight, nine months on this game. It looks like within three months, it will have broken even and then some. Of course, because we self-published it, it’s the first time we’re getting the bulk of the money back, which is amazing. We own the IP this time. It’s opened up a bunch of doors and possibilities that we just didn’t have until this point. In terms of a model, I’d say it is a success. 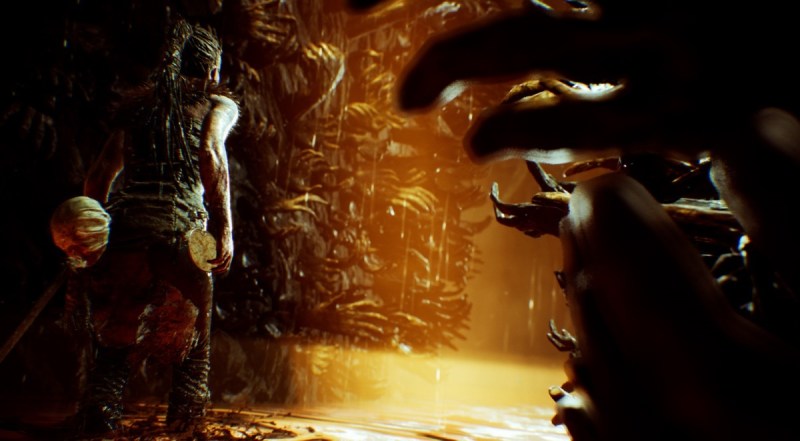 Above: Into Hel, the Norse underworld.

GamesBeat: So, it turned out that going indie was the right move for this?

Antoniades: Yes, yes, I think it really was. The triple-A publishing model goes in cycles, sort of, but it doesn’t really serve developers like us very well, mid-size developers. A lot of opportunity is out there for developers, but the triple-A model is a difficult one, a dangerous one, where you’re not fully in control of your destiny. As we’ve seen over the last several years, dozens of good developers have disappeared. The only way you can counter that is find another way. This seems to have worked for us.

We’ve documented the whole thing with our dev diaries. We’ve laid out how we’ve done it, and soon, we’ll release the data as well. We’re doing that because we genuinely want games to be as exciting, ambitious, and creative as they used to be — and still are to an extent. But there’s a real danger in losing great studios at an alarming rate when we shouldn’t have to, simply because we don’t know what works and what doesn’t in the digital era.

GamesBeat: Do you feel like there’s anything else in your genre? The one comparison I’ve seen is that it’s like a triple-A Depression Quest.

Antoniades: [Laughs] I think people have had trouble trying to categorize it. They use terms like “walking simulator action game,” “depression tourism,” whatever. I’m just glad that it’s breaking away from the patterns of what you expect from a game. It really was an experiment. We had no idea whether it would work creatively, either. The fact that the intro is eight or nine minutes of not doing anything at all — you make a gray box level where this is going on and everyone looks at you like, “What the hell are we making here?” But in the context of the atmosphere, the story, the immersion, it really does seem to have worked.

I think it helps show that if you focus on the experience, anything can work. We break out of that idea that a game can only work if it’s a 60-second loop of fun repeated over and over again.