Brianna Wu, a game developer who stood up for women facing harassment in the game industry, has decided to run for the U.S. House of Representatives. She hasn’t officially announced she will run yet, but she posted the picture below on her Facebook page earlier today. And she confirmed via email that she is serious.

Wu, a Democrat, said the campaign hasn’t officially kicked off yet, but she is assembling a team of advisers to help set her agenda.

“My main agenda will be economic. Here in Massachusetts, taxpayers spend an amazing amount on subsidizing education – particularly with infrastructure. But then students and entrepreneurs take that investment by our state to San Francisco or Austin,” she said. “I think we can do a much better job keeping startups here in our state. Also, look at the game industry, which has been devastated here in Boston with the loss of Irrational and others.

“I’d hope to serve on the House technology subcommittee. It was very disturbing to me to see members of the House tie the Mirai botnet (malware that hijacks computers) to the Stop Online Piracy Act (SOPA), simply parroting special interests. It’s an example of how our tech policy doesn’t serve the American people. We need people making policy that actually understand technology, that understand the assault on our privacy. It’s a national security issue, and we’re failing badly.”

The image in the campaign poster says, “She fought the Alt.Right and won. Now she’s fighting for all of us. Fearless leadership for 2018.” 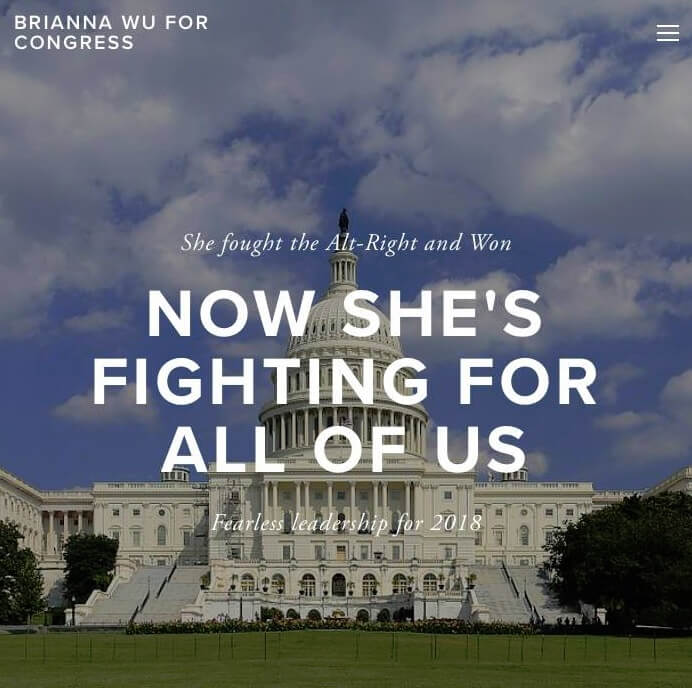 Above: Brianna Wu has decided to run for Congress.

Wu lives in the Boston area and runs the Giant Spacekat indie game studio with Amanda Warner in Boston. She has been an active blogger and podcaster on topics such as sexual harassment, gender rights, and Black Lives Matter.

During the Gamergate controversy, Wu was an outspoken figure, challenging haters on the Internet. Wu spoke at our GamesBeat 2015 conference about receiving 180 death threats during that time. She was also excited about virtual reality.

Wu started Giant Spacekat in 2010 with Warner, and they made Revolution 60, a game with an all-female cast. Wu said that Cory Doctorow, a science fiction author and co-editor of the blog Boing Boing, has agreed to be an adviser on her campaign. Wu said that if she decides to formally announce she is running, she would probably step back from her role at Giant Spacekat.

But she also wants to transform more than the state she would represent.

“The other reason I’m running is because I’m ready for a bolder Democratic Party. I didn’t personally support Sanders in the primary, but he tapped into a very powerful disconnect between our party’s leadership and our base. We want leaders that will fight for us, and all too often the Democrats don’t stand up to the fringe extreme of the Republican Party. I’ve been called a lot of names over my career, but I’ve never been told I’m scared of a fight. You know just how passionate I am about women in tech. But I believe we’ve hit an asymptote with what activism in tech can accomplish. People are aware of the problem, but all that’s getting done is window dressing. We don’t need more catered women in tech lunches, we don’t need speeches – we need structural bias against us to stop. And I think women in tech serving in the legislative branch is the next step forward.”