Steve Perlman’s OnLive video games on demand service was the talk of the Game Developers Conference in San Francisco last week. Every person I interviewed had an opinion about the story, which broke on Monday night.

The service, launching this fall, lets gamers play high-end games on low-end computers thanks to a new server-based computing design. The games are processed on servers, and game images are piped back to homes where they are displayed on a TV or monitor. The service promises to cut game retailers out of the picture entirely and eliminate the need to upgrade hardware every few years. (Check out our own poll where you can vote on whether or not OnLive will succeed.)

But some people have reacted with utter skepticism and have made OnLive the subject of unfounded rumors. Several executives at game companies mentioned to me that OnLive’s demo, where it allowed people in its booth to play games that were hosted dozens of miles away on servers in Santa Clara, Calif., was fake. They had gone to the show’s Internet service provider, Priority Networks, which repeatedly confirmed to them that there was no Internet connection in the OnLive booth. 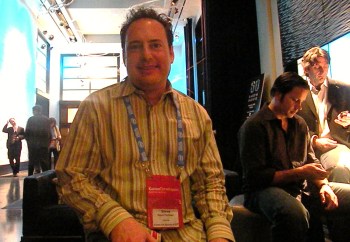 Word spread fast that the demo was a hoax. But Perlman had told me before the show that the company had to secure a special communications link to ensure it had good bandwidth on the show floor. It went through Verizon, which brought a fiber link to the show, and then XO Communications to bring 24-megabit-per-second Internet connectivity to the booth, which then split the connection into four different sections.

Despite rumors he was a fraud, Perlman was a popular figure at the show. He talked himself hoarse explaining the technology over drinks and oysters at the W Hotel.

“As an inventor, it’s a compliment to have someone say an invention is impossible,” said Perlman. “But as a CEO of a startup, it’s frustrating.”

Some of the people queried wanted more technical details of how the system works and how much it will cost. Those details will come with time, Perlman said. (Some detail is already available.) I’m personally looking forward to the debate about the technology as more details emerge from the 5,000 or so pages of patent filings associated with OnLive.

One critic, Richard Leadbetter of EuroGamer, said that the latency — delays based on distance — will be so long that it will be impossible to play fast-action games on the OnLive network. He also said the server costs will be prohibitively expensive since the company will need one server for each game player.

Here’s Perlman’s response to that. Since it’s technical, I’ve included the full quote. But basically he says that OnLive has solved the latency problem and its server costs won’t bankrupt the company:

Regarding server costs, he does not understand server economics. It doesn’t matter how many subscribers you have per server. It matters how much revenue you earn per server. Most web services are ad-supported and CPM-based and need to have thousands (if not millions) of users per server over the course of a month in order to pay for the server because they earn a tiny fraction of a cent per user.

OnLive servers earn many dollars per user each month (many orders of magnitude more than a CPM-based business), and when one user is offline, another user is online, so even a server that is only serving one user at a time (e.g. for Crysis), is reused by many users each month. The useful life of a server is probably around 3 years. so, if you amortize the cost of a server over 36 months, you quickly realize that on a monthly basis, the cost per server is very low. And lastly, the cost of a server is much less than a home gamer PC: we don’t have the case, disk drive, optical drive, etc. And we don’t have to worry about retail markup, customer service, etc. Long story short, the revenue per server per month is much higher than the cost of the server. It makes OnLive a very healthy business.

So, again, it doesn’t matter how much a server costs. It matters how much the server earns relative to its cost. And, OnLive’s servers are far more profitable than servers used in CPM-based businesses.

But, above all, it should be patently clear to anyone who knows the video game business that there is NO WAY that  top-tier game publishers would support us with the latest top-tier games unless they had put OnLive’s technology through the ringer. It took years…literally…working with EACH of these publishers where they have verified there are no smoke and mirrors, the tech works in a normal home, the business model is viable, and the quality of the game play is as good or better than a PC or console.

Here are some more reactions from some of the game industry’s heavyweights. Will Wright, David Perry, Warren Spector and Neil Young offered their opinions at the GDC Presents Luminaries Lunch.

I haven’t spent any time up close to understand their opportunity. But from Nintendo’s perspective, what drives this category are the games. Mr. Iwata said it on stage. We’ve said it many many times. And for us, Mario, Zelda, Smash Bros., Brain Age — that’s what drives the consumer to enjoy our industry and that’s what drives our growth. None of those franchises are going to be on a competing platform. Based on what I’ve seen so far, their opportunity may make a lot of sense for the PC game industry where piracy is an issue. But as far as the home console market goes, I’m not sure there is anything they have shown that solves a consumer need. What’s the better experience in what they have described. It’s going to be interesting. It’s going to come down to what are the actual economics. Until that’s disclosed, it’s awfully tough to comment.

I have not spoken to the OnLive guys. I don’t know enough about it to have an opinion on it. I’m trying to figure out what it is and how they do it. I wasn’t aware of it beforehand. The idea is very interesting. Where the rubber meets the road on this stuff is implementation. Latency is always an issue with online games. If they are going to put massive banks of servers all over the country, that would be a tremendous infrastructure expense, based on our own experience with Quake Live. It requires a diversity of server locations to support everyone. That leads to a lot of costs.

Will Wright, designer of Spore and Sim City:

Will it change the way I do things? Not really. It’s going to be providing the same game experience as on the consoles. On the business side, it will change things. On the creative game design side, the 10 percent latency issues that we already have — I don’t see how it’s going to change the way we design games. How many game designers are significantly constrained by hardware at this point?

New distribution methods can have an effect on game design. I am sick and tired of the movie model that we have adopted as a business. Frankly, all we get to do in mainstream games is tent-pole games. We do summer blockbusters. That’s crazy. It’s a terrible business model. We should be thinking more like television with serialized content. With this, there is a direct conduit between me and my players. I can get at lower commitment gaming, where players can drop in and play an episode of a game. You have to think about how you would do narrative in a different way if you do a serial narrative that has to keep people hooked for a long time.

OnLive [is] a promising step toward on-demand gaming.  . . . At the conference, we met with co-founders Steve Perlman and Mike McGarvey, and we were able to demo the platform. OnLive delivers real-time rendering of game-play to TVs, PCs, and Macs from the Internet “cloud.” Overall, we were impressed by the system and can imagine on-demand gaming becoming another viable distribution channel.

Imagine if you could play Crysis but didn’t have to pay thousands of dollars for the gaming PC. You could play it on your little Netbook computer and get a taste of it. There’s a company called Trion World Network that has raised $100 million plus to do this. Structurally, the design is such that they can add new servers at any time. They have artificial intelligence servers. They have a flaw where every time you add a server, you have to make a jump from one server to another before you go back to the gamer. It adds to the latency problem. The smart way is if they can build fast-enough machines that can switch quickly. Perry has also posted more complete thoughts on his own blog.

If Onlive works as advertised it could increase the pc gaming audience.   Onlive can introduce non-gamers to something better than casual gaming on their pc.  This would give them a path to graduate to a better PC.

Finally, John Taylor, director of production communications at Advanced Micro Devices, said that the OnLive service is similar to what AMD had in mind when it talked in January at the Consumer Electronics Show about its AMD Fusion Render Cloud.