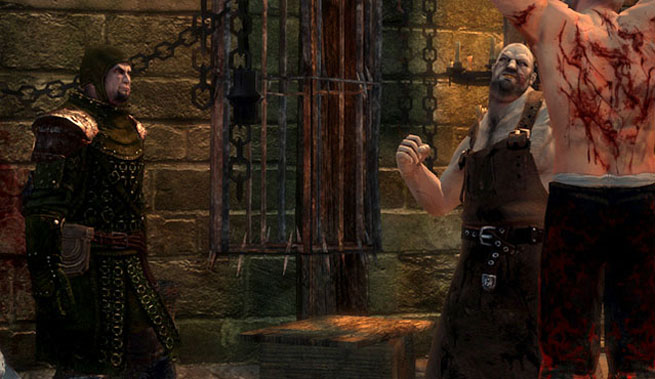 George R. R. Martin’s Song of Ice and Fire universe has some advantages for a writer who wants to tell a new story there. For one, it has some elbow room. It’s detailed, it’s fleshed out, but not so much so as to leave no space for new ideas. Martin hasn’t filled up the sandbox to the point where trying to build something new would knock down what’s already there.

For another, people in the Ice and Fire stories are allowed to be somewhat recognizably human. Characters can swear and crack jokes and possess active sex drives. It’s not like, say, Tolkien’s Middle-earth, where nobody ever says “shit” or shows more than a chaste, plot-driven interest in the possibility of romance.

Telling a story is only part of making a game, though, and that’s where the Game of Thrones game falls down. (Warning: We will have to abuse the word “game” here even more than game reviews usually do.) This feels like a novella turned into a role-playing game against its will, which makes it tough to recommend, no matter how addicted to Ice and Fire a fan might be.

Well-crafted side-story plot
Despite the obvious logo and stirring theme music from the HBO TV adaptation, this is a production for fans of George Martin’s novels. The plot and even some of the gameplay systems hinge on dozens of details from the books that the TV version’s writers either cut out or simply haven’t gotten to yet. Some bits won’t fully make sense to players who haven’t read all five, although by and large you can get away with having just read the original Game of Thrones.

That isn’t unequivocally a problem, but followers of the TV show alone should know that they’re going to be confused from time to time if they play the game. At the very least, they’ll miss out on a lot of the little plot threads that weave the game together with the existing world and story. 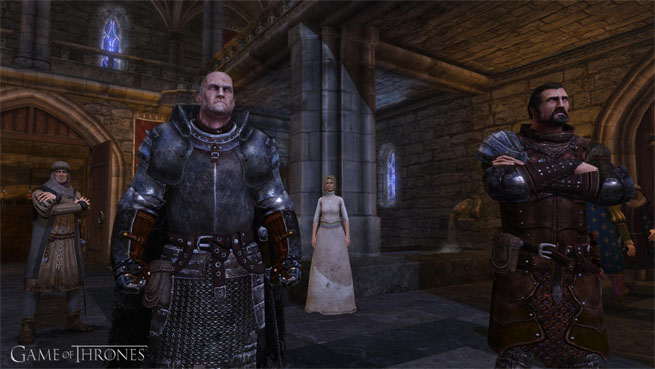 While the story has some fundamental problems (more on that later), the way it fits in to Martin’s world is very cleverly done. Events and characters from the novels exert an influence on the game in a way that makes it feel like a part of the larger epic, but at the same time, the game carves out its own territory in the world. It’s not simply retelling a chunk of the novels or TV series. The opening movements of the original story have a neat symmetry to them, too, as the adventures of two war veterans — a soldier from the Night’s Watch and a prodigal lord’s son — eventually come together and revolve around each other.

Put the bite on ’em
Different aspects of gameplay build on parts of the novels, too. For instance, Alester the lord’s son is a priest of the fire god R’hllor, a plot element introduced in the second of Martin’s novels, and so his suite of combat abilities includes all kinds of interesting variations on the theme of setting his weapons on fire.

Meanwhile, Mors, the Night’s Watch man, has a nifty concept for a sidekick. Speaking in general terms, so as not to spoil too much, later books in the series introduce the notion of a “warg” or a “skinchanger.” That’s someone who isn’t exactly a werewolf but who has the ability to sink his consciousness into an animal and control it.

Mors’s preferred companion is his pet bull terrier, who fights alongside him in combat and sneaks around for him elsewhere. Taking control of the dog introduces a stealthy element to exploring dungeons — he can fit through small spaces, and he can rip out a bad guy’s throat if he gets the jump on them. This is incredibly fun. Somebody making a better game ought to swipe the idea and run with it as soon as possible.

Unpolished combat, interface, scenario design…
Unfortunately, this is not that better game.

Start with the combat system, a massively-multiplayer-style scheme that takes place in not-quite real time. Players can pause in between dealing out automatic attacks to slow time down to a crawl, access a sub-menu, and queue up special attacks.

Well and good in theory but not so effective in this particular execution. Battles here need much more feedback of every kind. Visual effects, sounds, tactile response…none of it is timed right to make fighting feel like anything more than watching an enemy’s life bar tick down. The camera and A.I. deal very badly with enclosed spaces, so fights in any kind of corridor-type space often lead to allied characters disappearing behind walls or getting stuck around corners. 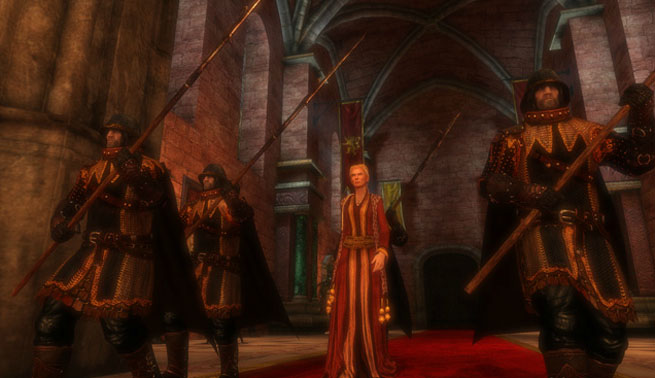 On a more detailed level, the interface has a lot of fiddly issues that need cleaning up. For instance, the minimap is missing vital details. It shows where objects and quest goals are sometimes, but it doesn’t show the layout of the area around them, so it’s impossible to follow a route without constantly dipping in and out of a sub-screen. Shop menus don’t show comparisons between existing equipment and potential purchases, and they’re also missing an option to automatically equip new gear. Again, that means toggling back and forth between inventories and shop screens to gather information.

During some of the more confusing quests, all that twiddling with menus becomes maddening. Some quest goals are simple and clear, but a lot of them are liable to send players running in search of a walkthrough. Many of the interior areas in Game of Thrones succumb to a bad case of the old “maze of twisty passages, all alike” design style, leading players to chase their own tail for ages through a mess of identical gray and brown rooms.

Cutscene, move, cutscene again
The quests that are easy enough to progress through are not necessarily fun. Imagine a section of a quest chain that involves going and visiting somebody at his house. First, find a marker that reveals the location of the house and watch a cutscene. Then walk to the house and watch a cutscene that introduces the house. Walk five steps into the house, talk to the character, and there goes another cutscene. Bad guys burst in during the middle of the conversation. Knock them off, then watch more cutscenes.

Some of the blips of interactivity between each cinematic here last no more than a couple of seconds. Most of them don’t take any thought or effort. Why that five-step gap between the house cutscene and talking to the householder? Heaven knows. The practical effect, anyway, is a nasty uneven staccato rhythm to gameplay and story both. It’s no fun being constantly jerked in and out of interacting with the game, especially when there’s no meat to those stretches of interaction anyway.

Perhaps the novels were too much of an influence on the game. Martin’s stories involve a lot of dialogue, a lot of politicking, a lot of behind-the-scenes machinations, and a surprisingly small amount of genuine action. As often as not, major battles and other physical confrontations happen “off-camera,” so to speak, or in between chapters. What action there is tends to take place in short, sharp bursts.

If this game were going to get away with doing so much talking, it needed better voice acting. Some of the cast members are quite good — Conleth Hill leads the pack reprising his role as Lord Varys from the TV series. The majority, however (especially the supporting roles), aren’t so effective that we want to listen to them for minutes at a stretch. Alester in particular is cursed with a voice that just can’t sell his dialogue properly. He’s flat at best and ridiculous whenever he tries and fails to get his supposed emotional dilemmas across. 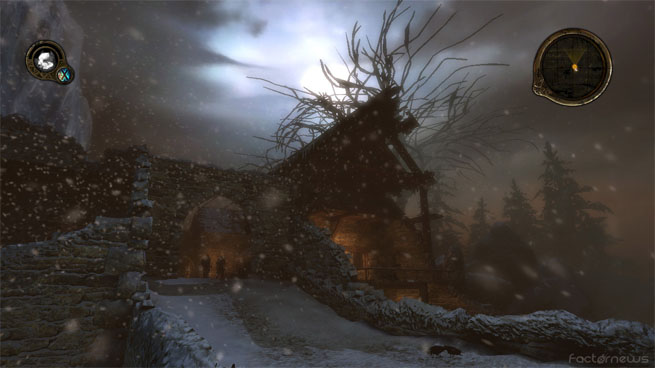 Nice day for a Red Wedding
Regarding another possibly unfortunate influence, Martin’s novels are (in?)famous for doling out pain to their heroes. Now, to tell the truth, this reputation has grown a little in the telling. The Ice and Fire stories do have their moments of wrist-slitting misery, but they’re also often upbeat and hopeful. Sometimes they’re even genuinely funny.

The folks who worked on this video game, though, apparently decided to focus on the wrist-slitting misery. If there has ever been a grimmer, more depressing story in a game, we don’t want to play it. Our heroes can find their way to four different endings, and they range in tone from “bleak and uncertain” to “horrific and hateful.” Leading up to those endings, every awful thing that can possibly happen does. Something brutal befalls nearly every likable character. Many of the characters we like at first give us reasons to hate them before very long. The most uplifting moments come around when someone really horrible dies.

Do we display an excessive sentimentality in saying that it isn’t any fun getting kicked in the teeth at every turn of the plot? Maybe, but when you look more closely at the mechanics of the whole thing, the story here isn’t just depressing, it’s ultimately predictable. Once you understand that Game of Thrones is just going to constantly upend the pain-bucket over your head, you settle down to expect the worst, and when the worst indeed happens (again and again), it doesn’t have much impact.

It also would have gotten its business done a lot quicker. Instead, the interactive version stretches all that doom and brutality over 15 or 20 hours, and the gameplay filling space in between doesn’t do much to ease the pain. Somebody may one day make a fine game out of the Song of Ice and Fire. It hasn’t happened yet.

Game of Thrones will be released on May 15, 2012 for the Xbox 360, PlayStation 3, and PC. An Xbox 360 copy of the game was provided by the publisher for the purpose of this review.