Tech advisor Digi-Capital expects the game-software industry to grow 22 percent from $90 billion a year in 2016 to $115 billion a year by 2020, according to a new report.

The company said that the game industry continues a big transition as market leaders are consolidating their positions as different sectors ebb or grow. The growth rate is healthy, but it isn’t as big as in past years as the overall industry becomes more mature.

“The coming years could be both ‘steady as she goes’ for some and a rollercoaster (up and down) for others,” said Tim Merel, managing director of Digi-Capital and CEO of AR/VR developer Eyetouch Reality. “Long-term growth appears to be slowing to a steady 7 percent compound annual growth rate (CAGR). The current single-digit growth games market looks very different to the go-go years gone by, so let’s see who’s up and who’s down,” he continued.

“The games market changed dramatically in the last 5 years, with the rise of mobile growing the market overall and cannibalizing other sectors,” Merel said.

VR games software (and to a lesser extent augmented reality) could grow from hundreds of millions of dollars to $10 billion by 2020 or 8.6 percent of the overall market. The massively multiplayer online and multiplayer-online-battle-arena markets will be another large sector, and will grow share overall. Esports is another bright spot for growth.

“Asia became the dominant games region in recent years, with China, Japan, South Korea, and the rest of Asia forecast to take over $4 of every $10 spent on all games software by 2020,” Merel said. “So, while the U.S. could be the largest single games country (with the potential for Chinese innovation to change that), the regional running order for the games market through 2020 continues to be Asia, Europe, North America, and everyone else.”

China is expected to stay strong in mobile games, thanks to strong domestic Android app stores and Apple’s surge in the last year.

“Asia as a whole could account for more than half of all mobile-games revenue by the end of the decade,” Merel said. “The markets to watch closely aren’t surprises, as mobile marches on and VR games begin to change the world two eyeballs at a time. The big question is can the market break out of its transition back to the high growth of the go-go years? They were fun, and who doesn’t like fun?”

Of course, Digi-Capital isn’t counting game-related hardware sales. PC gaming hardware is expected to result in $29 billion worldwide in 2016, according to an estimate by DFC Intelligence. 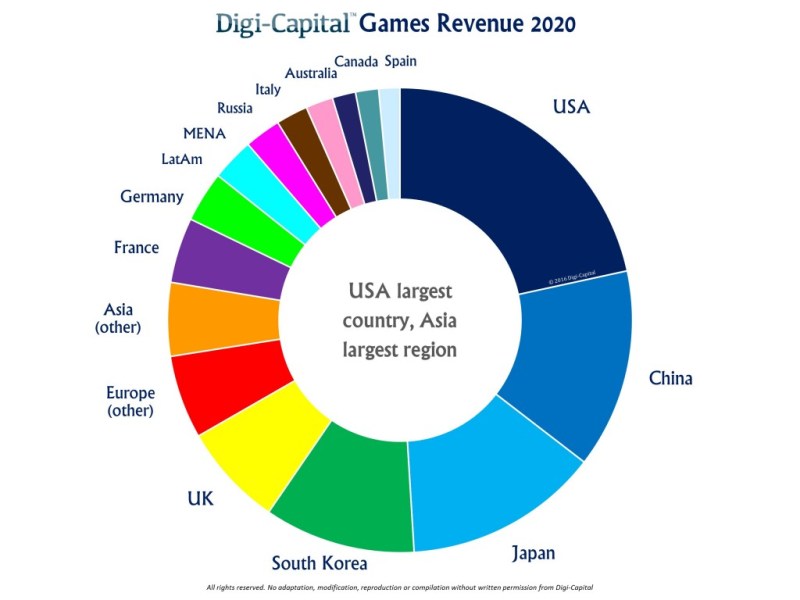 Above: Game revenues by region.