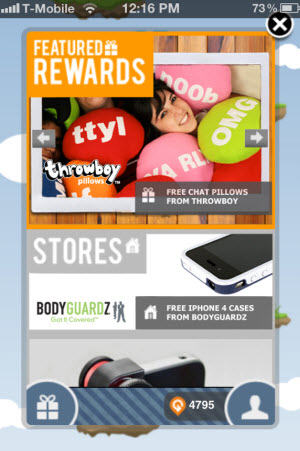 Gimmie, a startup created by seasoned game developers, is launching a new rewards program for users of mobile apps.

Gimmie’s new incentives platform, which begins beta testing today with 10 mobile app developers and consumer brands, can boost in-app revenue (where users buys something like a virtual good inside an app) by giving game players real rewards for using apps or games.

The San Francisco-based company was started by Roy Liu, chief technology officer and one of the original developers at PopCap Games, and David Ng, chief executive and previously from China Cache. Liu was the lead developer for Plants vs. Zombies, one of PopCap’s most popular titles.

The two men saw that earlier incentives forced users to leave an app to fill out a survey in exchange for benefits. With Gimmie, they wanted to work in reverse, rewarding users with items outside the app for performing actions within it.

“The biggest part of developing a good mobile game is creating the best user experience, and so often mobile ads get in the way of this,” said Jason Citron, founder of OpenFeint and an advisor. “Gimmie is the first monetization platform I’ve seen that doesn’t interfere with the game, and it provides a whole new way to help developers increase engagement that is fun for everyone. It’s a dramatically different approach from any other platform I’ve seen.”

Gimmie works by letting mobile app users earn Gimmie points as they use apps. They can save and redeem the points by getting free or discounted real-world products. Gimmie users can search for any rewards they want in a marketplace. The developer gets to make all of the decisions about how to implement the incentives. The programming is easy enough that developers can do it in a matter of minutes.

Gimmie lets its brand partners target mobile app users that they want to reach via options for coupons and free products.

The company has raised $200,000 in seed capital from the Tandem mobile incubator in Silicon Valley.

Gimmie was founded in late 2011 and has five employees. Rivals include Tapjoy, Tap.Me, and Kiip.