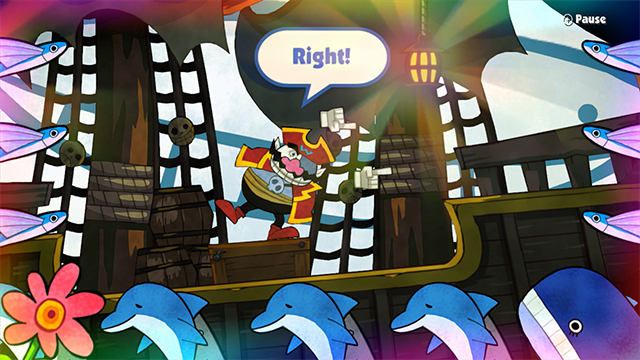 Wii U owners are starving for games. Since the console launched in November, third-party developers have been slow to support the hardware (as they historically have been when it comes to Nintendo consoles), but more surprisingly is the lack of software from the Big N itself. Usually known for supporting its systems with great, exclusive titles, Nintendo hasn’t released much of anything for the Wii U since its launch.

Looks like Nintendo fans need a hero. So who will save us from this drought? Mario? Zelda? Samus?

Wario? Wait, Wario? The guy who loves to eat garlic and fart?

Well, maybe he’s not up to the task to completely save the Wii U, but Game and Wario’s collection of amusing minigames is sure to bring you some joy when it releases comes out Sunday.

Cool uses for the tablet

The Wii U’s GamePad tablet controller has been its most touted feature, but we haven’t seen too many interesting uses for the unique control scheme. Game and Wario actually gives us several examples of how the tablet can change gaming.

While other titles in the WarioWare series focus on very short and simple minigames that you have to complete quickly, Game and Wario’s bite-sized experiences have a bit more meat. Instead of pushing a single button to pick a poorly drawn nose, you tilt the controller to ski down a mountain, fling arrows from your tablet’s screen at robots on your TV, or take pictures of wanted criminals hiding in a busy city.

Each game offers a unique and often surprising way to play. “Pirates” is one of the best. You use the tablet like a shield to rhythmically defend yourself against volleys of arrows shot at different directions. “Gamer” was another favorite of mine. You actually play a more traditional WarioWare collection of fast and frantic minigames on the second screen, but you have to hide your controller when you see your mom peeping into your bedroom on the TV.

The package is similar to Nintendo Land, another collection of smaller games that was a Wii U launch title. But in many cases, Game and Wario actually out-innovates the former. It provides better examples of what can make two-screen play so compelling, and most of its experiences are easier to grasp than Nintendo Land’s, which necessitated long, boring tutorials before you could play anything. And although Game and Wario does have some instructions, the whole thing is a lot easier to pick up.

The single-player stuff is good, but the multiplayer modes are often more compelling. Perhaps the best is “Sketch,” which really isn’t too different from Pictionary, but the experience works incredibly well on the Wii U. More original is “Disco,” which has two players hold different ends of the tablet and take turns sending a barrage of musical notes that the other has to tap in time. It’s the competitive mode that Guitar Hero wished it could have had.

What’s great is that you can play all of these with just the tablet. Unlike with Nintendo Land, you don’t need an army of Wiimotes and Nunchuks to get your friends in on it.

The WarioWare series has always been the black sheep of the Nintendo family. Instead of focusing on heroics or casual play, Wario celebrates offbeat humor and general weirdness. Thankfully, that tone persists here, especially in the amusing little cartoons that play before you start each game.

You’ll find some of the more bizarre experiences after you open a few capsules (which you can earn by spending tokens you get as you play) and start racking up a collection of weird items, like a crystal ball that predicts what you’re going to have for dinner or a stethoscope that lets you look at the anatomy of a chicken.

I was talking about how great the multiplayer modes were earlier. Sadly, it doesn’t have enough of them. Game and Wario has four multiplayer minigames, compared to 12 single-player ones. I would have liked to see more of a balance, especially when Nintendo’s minigame collections have historically worked best when played with friends.

OK, Game and Wario is a good minigame collection, but it’s still another Nintendo minigame collection. Most people who own a Wii U already have Nintendo Land, since it came bundled with most systems. And while I like Game and Mario more overall, this system is really starving for more depth. If you’re looking for something to justify your hardware purchase, this probably isn’t it.

I admire Game and Wario’s charm and creativity. After playing it, I can definitely say I’m more sold on the Wii U’s tablet controller than I was before. I just want to see these features implemented in meatier experiences.

If you get Game and Wario, you should find plenty of fun. I just can’t promise it’ll hold your attention until Nintendo starts releasing some full-on games for the Wii U.

Game and Wario comes out for the Wii U on June 23. Nintendo provided GamesBeat with a copy for the purposes of this review.