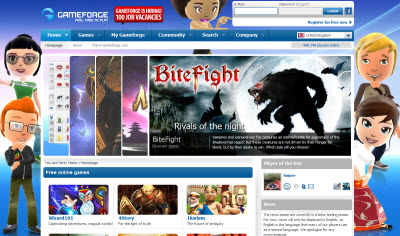 Gameforge said today that it has hit 300 million registered users for its downloadable online games. That milestone establishes Gameforge, a pioneer in free-to-play online games, as one of the biggest online game companies in the world.

The growth shows that free-to-play games, where users play for free and pay real money for virtual goods, is striking a chord with gamers around the globe. Gameforge has added 100 million registered players since August, 2010, or 8 million new users a month.

The Karlsruhe, Germany-based company made the announcement at the beginning of the Gamescom conference in Cologne, Germany. The company said that if it were a country, its current user numbers would make it the world’s fourth most populous.

Christoph Jennen, Gameforge’s chief financial officer, said in a statement that the company is strategically expanding its games and is looking for new staff. In Karlsruhe alone, the company has 100 open jobs. Gameforge has nearly 500 employees.

Gameforge was founded by Klaas Kersting, who recently created the new startup Flaregames, and Alexander Roesner Kersting recently said that Gameforge had more than $150 million in revenue by the time he left.

Atul Bagga, an analyst who covers games at ThinkEquity, said that Gameforge has quietly grown big and has generally kept a low profile, compared to some of its rivals such as Bigpoint.