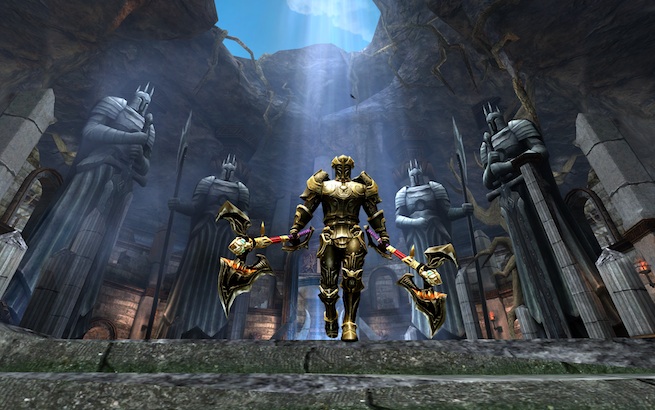 The graphical gulf between console and mobile games continues to close in, especially now that Gameloft is ready to reveal its first mobile title running on Unreal Engine 3, Wild Blood.

Coming soon for both iOS and Android devices, Wild Blood is a third-person action game much in the vein of Sony Santa Monica’s God of War franchise. Except instead of destroying the pantheon of Greek mythology, you must save the denizens of King Arthur’s kingdom from a horde of demons. And part of the reason why hellspawn are roaming around Albion is because of you: You play as Lancelot, who’s affair with Queen Guinevere made King Arthur mad for vengeance, causing him to partner with the evil sorceress Morgana to exact his vengeance on you.

Moral of the story: Next time, maybe you should think twice before sleeping with your king’s wife.

As one of the knights of the fabled Round Table, Lancelot naturally comes with a bevy of weapons and special abilities. Though you’ll start out with just one giant sword, your arsenal increases as you earn experience points; in the demo (shown on an iPad 3), a leveled up Lancelot dual-wields a pair of magical axes and shoots enemies from afar with his bow.

Combat leans toward a simple combo system that feels very responsive and smooth as Lancelot dodges and rolles his way through a large group (around a dozen or so) of demons. In a matter of seconds, these creatures became nothing more than a fine bloody mist. 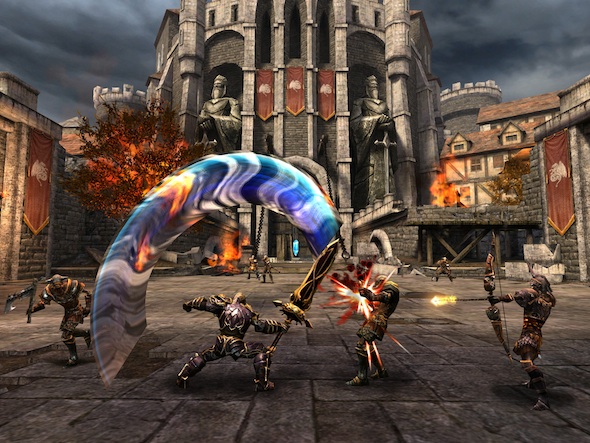 Epic Game’s Unreal Engine 3 — usually known for its impressive level of graphic fidelity on consoles and PCs — has seen widespread adoption among many developers since its debut for mobile devices in 2010. The incredible success of Chair Entertainment’s Infinity Blade, the first iOS game to run on UE3, contributed to the engine’s popularity.

Gameloft is one of the more prolific publishers of mobile and tablet games. Previous marquee titles from this year includes The Dark Knight Rises, a visually impressive but flawed video game adaptation of the Christopher Nolan film. In early 2011, the company revealed that its first UE3 game would be a first-person shooter known as March of Heroes; however, this was later cancelled.

When Gameloft reported its second quarter earnings in July, the mobile company showed signs of positive growth, expecting to close out 2012 with sales totaling over $240 million.