The spendiest group? The Japanese, with average annual spend of $120 each.

Gaming research company Newzoo has released a new interactive data resource that highlights the top regions and countries for gaming revenues in 2014. The company, which recently released its 2014 Global Games Market Report, says that the U.S leads all countries with a total spend of $20.5 billion on games, edging out China with $17.9 billion. 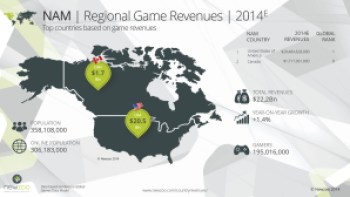 The data clearly show that gaming is no longer about North America and Western Europe. Newzoo CEO Peter Warman said, “The market has become a truly global playground, and the lion’s share of market growth can be found outside of mature markets.”

The last country in the top 100 is Sri Lanka, whose 21 million citizens will spend under $9 million — less even than tiny Malta, whose 430,000 residents will spend $9.9 million.

The Newzoo data is live and will be updated frequently. But perhaps even more interestingly, the company has released it in Excel format as well, so you can slice and dice the data — determining, for instance, which countries spend the most on games.

When you divide gaming revenue by online citizens, here are the top 10 highest-spending countries in the world per capita: 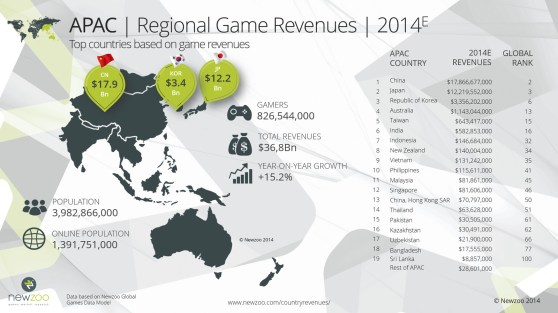 The entire list of 100 top gaming countries is available from Newzoo.