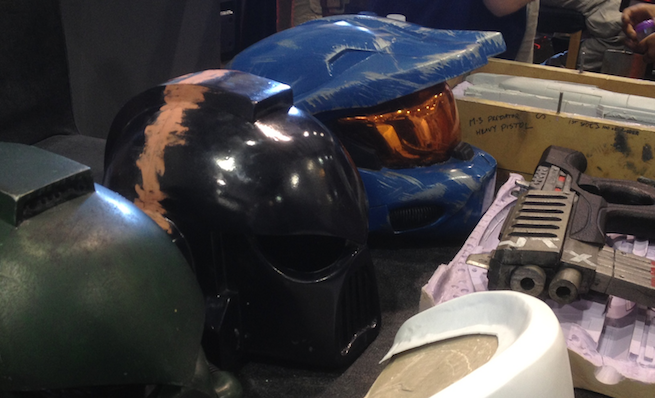 It’s rare to see Tesla coils, a man in a giant cardboard robot suit, an R2-D2-building club, steam punk accessories, and video games share a common zip code, much less congregate in one confined space. Yet they were all part of this past weekend’s celebration of do-it-yourself culture at Maker Faire 2012 in San Mateo, Calif. Packed with exhibits and experiments, Maker Faire is a chance for “makers” — that is, anyone who actively seeks to create something with their own hands — to not just show off their projects and hobbies but to inspire the thousands of people who came to see them.

Video games were just a small fraction of what was on display, but collectively they composed an insightful reflection on the history of the medium. On the fairgrounds were not just one, but two organizations who have dedicated themselves to the preservation of video games: the Digital Game Museum (DGM), who aims to preserve and explore the history and impact of digital games (but lacks a permanent home), and the Museum of Art and Digital Entertainment (MADE), who has similar goals but also possesses a dedicated physical space in Oakland, Calif. to house its work.

Walking through the carefully curated DGM exhibit felt surreal — underneath a series of glass cases were game boxes, jewel cases, manuals, and other paraphernalia that were neatly placed next to their corresponding placards. Games were treated with the same level of reverence and respect that is normally reserved for 18th century books at other museums; except not too long ago, people could just walk into a store and buy these classic titles off the shelves.

The exhibit served as a physical reminder to just how far the medium has evolved over the last two decades, especially as consoles, handhelds, and PCs move toward a rapidly approaching, digital-only future. This emphasis on the corporeal presence of games was not limited to DGM alone: At the adjacent MADE booth, an assortment of consoles, both old and new, attracted the wandering eyes and fingers of the many people who passed by. 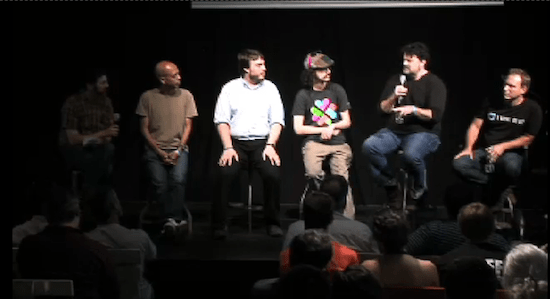 Through the massive crowds and sniveling children, and across an art installation that featured fire-breathing umbrellas, I found the Center Stage, where at 3:30 p.m. on a bright Sunday afternoon, Double Fine Production’s president and CEO, Tim Schafer, was speaking with a panel of crowdfunding experts. Earlier this year, Double Fine raised an astonishing $3.3 million on Kickstarter, a popular crowdfunding platform on the web, to develop a new point-and-click adventure game. Kickstarter, along with other crowdfunding sites, has since become de rigueur for independent developers looking for alternative ways to fund their creations.

Unlike the other panelists, however, Schafer was the sole representative of a crowdfunding success story, and he espoused the benefits of using Kickstarter as a way for fans to fund the games they want to play. He mentioned that, if possible, Double Fine would love to somehow make crowdfunding a part of a recurring business, since it would allow them to “directly work with the customers and not worry about any large companies getting involved.”

Despite its recent popularity, however, crowdfunding is far from being a sure bet. “It’s not a magical process that’s going to change everything for you…if you haven’t built a personal brand where people trust you and know you,” warned panelist Hiroshi Wald, managing director for venture capital firm Austral Capital Partners, “you do need to have a lot more in place [than just a website asking for donations].”

When Wald polled the audience for those looking to use crowdfunding as either a means to get a project off the ground or as a way to create a “start-up for life,” a young, scrawny man sitting behind me immediately raised his hand. “Code Hero!” he shouted. He was wearing a black hat and a black t-shirt emblazoned with the game’s logo. “We’re $170,000 in the hole!”

That man was Alex Peake, founder and CEO of Primer Labs, a small development team who had recently raised over $170K via Kickstarter for a game that teaches players how to program. As someone who had failed his programming classes back in college, I can personally vouch that learning how to code is no easy task, making Code Hero look all the more intriguing.

“First-person shooters can shoot science as well as bullets,” Alex proclaimed in a Code Hero presentation earlier that day, citing Valve’s Portal games as inspiration. Indeed, Code Hero will look familiar to anyone who’s ever played an FPS before — except instead of being handed a machine gun, the player uses a pair of glasses known as a code ray. This code ray can shoot strings of code into the game world, where the commands are then executed in real time. The team is confident that the game — through a series of puzzle levels (not unlike Portal) along with a narrative that incorporates the history of computational programming — will be teaching players to learn how to program in no time.

While other titles have flirted with this idea of making a game-within-a-game before (like Media Molecule’s LittleBigPlanet franchise), Code Hero appears to be the first to teach you coding skills that are applicable in the real world. It’s the latest push for the democratization of tool sets — already seen with Epic’s Unreal Development Kit, as well as the ubiquitous Unity engine — that allow people to develop the skills and confidence necessary to create games on their own.

This DIY mentality — also known as the “maker mentality” — for game design has the power to diversify an industry that has largely been the domain of triple-A publishers and developers. Perhaps the future of the medium isn’t going to be dependent on the newest tech engines or consoles, but on the ingenuity of millions of people who, when given the right tools, have the potential and drive to create great games.

“It starts with what you want to have,” said Adam Savage, co-host of the popular Mythbusters TV show. “When you want to learn something, you’ll make it better.” He was addressing the large maker crowd early Sunday morning with an inspirational speech about why we make what we make — his enthusiasm for the culture was infectious. With the Tesla coils towering behind him, he proceeded to deliver a thunderous declaration: “What unites us is that we are creatures of creation…make what [you’re compelled to] make, because it will make the world a better place.”