Alien: Isolation has me hyped. I mean call-in-sick-to-work on launch day levels of anticipation. Good thing I am self employed; the only person who can fire me resides in my bathroom mirror.

Still, a the threat of embarrassing miscalculation looms when getting worked up into the nervous shits over Alien: Isolation. I could be committing the most damning of game media’s school yard faux pas: public excitement over pop trite.

For Part 2 on the best games in the Alien series, click here.

To alleviate my fears, I plunged into the past Alien releases head-first to see how the license has fared in the video game medium. After two months of nonstop playing through a towering pile of games, I felt I had to share what I experienced. I found a lot of bad, a healthy amount of good … and a shocking dose of weird.

Today, we’re going to set our motion trackers to “bad, canceled, and odd-yet-cool.” These are the releases that every fan of 20th Century Fox’s space monster should know about but may want to avoid, either because these games never saw the light of day, are not obviously available, or … well … are just horrible.

Three things from the ’80s that should’ve gone great together: Aliens, Square, and the Nintendo Entertainment System. Well, if we want to get technical, not so much the “NES” as the Famicom Disk System, a floppy disk drive attachment for the Famicom.

There was an official release of the game available in Japan on the MSX, but the Famicom version was considered lost. That is, until a very generous collector by the name of “Yuki” got a hold of a rare Famicom Disk System floppy containing a version of Aliens and dumped the ROM on the Internet.

This incredibly rare Aliens game features Ripley shooting facehuggers in a bland-even-for-its-time side-scrolling shooter. If you want a really great 8-bit Aliens-like experience, I suggest sticking a Contra cart in your NES instead. 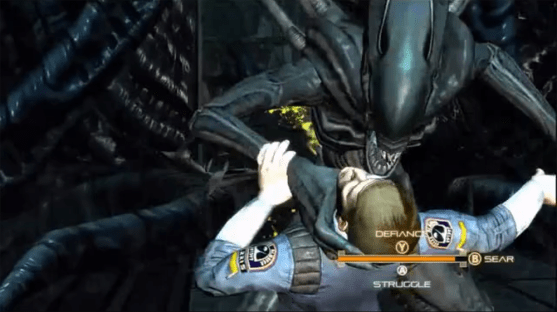 Aliens: Crucible was shaping up to be an ambitious third-person action-RPG. Players manage a group of workers inside an unnamed facility, which is being overrun by a xenomorph invasion. Each character in the group has their own strengths and weaknesses based off of what their role was on the work site. Details on what those roles are and how they worked into the overall design are scarce, but it is obvious Aliens: Crucible wasn’t going to be yet another group of Colonial Marines leaping into a bug hunt.

In 2009, Sega decided to cancel the project and instead focus on Aliens: Colonial Marines. In hindsight, that was a bad decision.

Making the cancellation even stranger is Obsidian Entertainment’s claim that Aliens: Crucible was close to completion. The industry is littered with canceled and unfinished projects, but it isn’t the norm to see something receive the ax when it is close to going gold.

Titillating fans of the franchise even further, someone leaked a 13-minute video showing off gameplay from a late milestone version. It sucks to think about this potentially cool and near-complete concept is in stasis on some random Sega and Obsidian Entertainment hard drives.

I hate gambling games. Not because I am trying to be a morally sanctimonious twit, but because in the end, no matter how clever the mechanics, they are obligated to end with a horribly lopsided luck component.

I’m also a raging hypocrite, because I dumped about 100 bucks into one of these Alien slot machines during my honeymoon in Las Vegas.

IGT’s Alien plays like most modern touchscreen slot machines. You have a five-reel, three-row set up with up to 20 lines to wager on. Match up any of the lines with three or more similar symbols and you receive a pay out. Alien also features a couple of bonus modes, such as an Alien Hunt section that has you facing off random creature encounters for extra credits. It also has an egg section where you are opening Alien pods for bonus credits, while trying to not pick the one egg containing the facehugger.

It’s bizarre to think that this would be a good casino theme, but gambling has obviously changed from being a vision of grandpa’s smoky riverboat-themed card den to something with an all-encompassing, theme park-like appeal. That includes a modern arcade-style vision, with games licensing popular franchises. If you’re going to park your ass at a slot machine and gamble the minimum amount of nickles per hour trying to qualify for free drinks at the casino, why not do it sitting in front of a theme you enjoy? 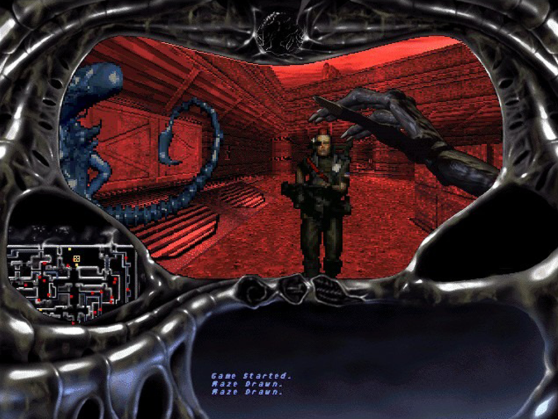 During the Internet’s infancy, a lot of bets were being made on dodgy business ideas tied to the information superhighway. As history shows, losers outnumbered winners. This was true for the PC game industry and the several online-games-as-service marketplaces that became popular during the time.

Services like GameSpy, M-Player, and Heat.net offered their players a gated community of game servers and chat rooms. GameStorm was one such provider that ran with a paid membership model ($9.99 a month), which gave customers not just an avatar and a list of Quake servers to connect to but also exclusive game content from Mythic Entertainment as well.

One of those offerings was Aliens Online.

Playing as either an Alien or a Marine, participants fought an interspecies war in a 2.5D first-person shooter world. Aliens were quick and silent and lacked ranged attacks. Marines had superior firepower but were slow and easy to locate.

Aliens Online, unfortunately, was riddled with balancing issues and bad level design. Some maps contained obvious spawn kill spots, enabling one group to slaughter players as they were entering the game. Marines were given extremely overpowered tools such as auto-aiming smart guns and land mines that were instant kills for Aliens but did minimal damage to human players.

A year after Alien Online’s launch, Electronic Arts bought GameStorm. In 2001, the giant publisher shut down the service. A single-player version of Aliens Online can be found if you dig deep enough, but the online component, along with GameStorm’s servers and service software, is locked away in a closet at EA.