“For a long time, advertisers have been trying to find a way to reach gaming audiences and now that gaming video content and e-sports are increasingly popular it is finally possible,” he said. “I expect the traditional media industries to slow down this process as much as possible, however, by repeatedly discrediting these experiences as temporary or low-quality.

“But since both consumers and advertisers vote with their dollars, I believe it is likely that we’ll see a shift in the flow of money and, consequently, in the entertainment hierarchy.”

Games’ share of the entertainment market has tripled in the past 30 years, according to the SuperData report. Games for the Nintendo NES, released in America in 1985, helped kickstart the industry after a post-Atari slump.

Interestingly, the focus on gaming’s most hardcore competitive players comes as a result of the industry itself becoming more mainstream, van Dreunen said. Now people who use PC mods (generally fan-made pieces of software that add or otherwise enhance games)  and watch e-sports come from a wide variety of age groups and backgrounds, creating a larger audience that can help fund those activities.

“Traditionally, the bulk of the gaming audience involved in creating mods and other user-generated content consisted of people [who] dedicated so much time and resources toward it that they’d practically be professional designers,” he said. “Nowadays, watching YouTube videos, Twitch stream and installing mods is increasingly part of the interactive experience, regardless of your level of dedication.”

That shift is bringing some of the funding power to the people. While advertising drives most of the $1.5 billion in gaming video revenue, direct subscriptions and donations are a significant factor, van Dreunen said.

“On the short term, this allows people with a small following to still generate enough and build out their channel and content. On the long term, this means that audiences can collectively crowd-fund video content that would otherwise never see the light of day,” he said. “In this new world, advertisers will still maintain a strong influence. But they will have to share it with audiences.” 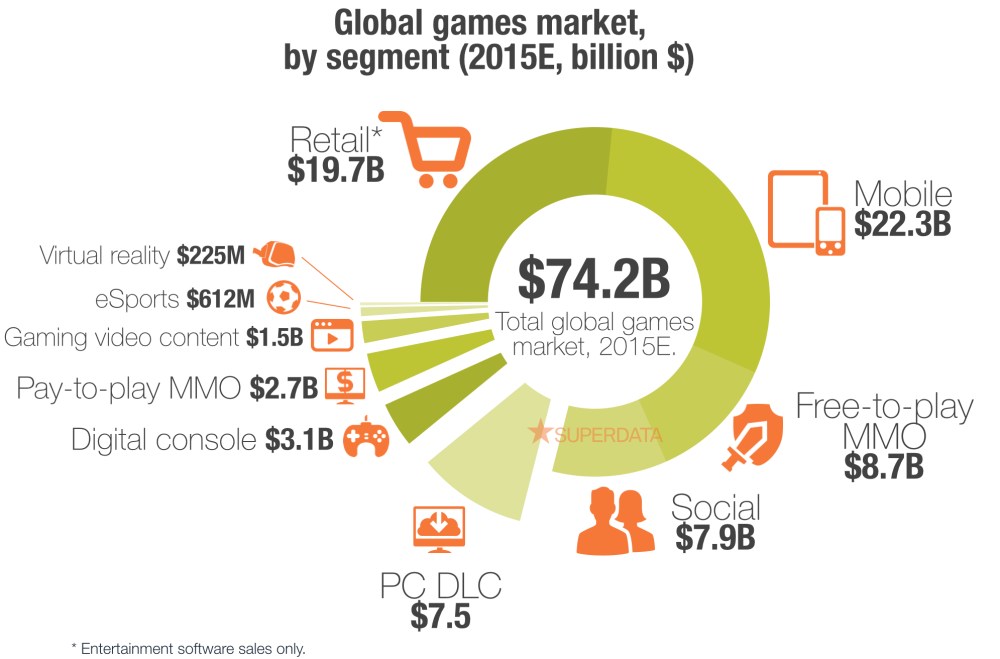 Above: The projected global games market by segment in 2015.

Mobile makes up the largest revenue segment in SuperData’s study, with $22.3 billion of the overall $74.2 billion total. Retail sales follow at $19.7 billion. Free-to-play massively multiplayer online games — think League of Legends or World of Tanks — come in at about half that, followed by social games, downloadable game content for PC, digital console sales, pay-to-play MMOs, and the rest. SuperData’s study analyzes only software, not hardware, sales.

SuperData’s research agreed with the new study released by Newzoo yesterday, suggesting that the next big trend in gaming is the strong desire by players to control their content through modding, downloads, and customization.

“A whole generation is growing up fluent in manipulating digital content, assembling unique experiences and ideas through Minecraft,” van Dreunen said. “The current behavior of gaming audiences provides a blueprint of what entertainment consumption will look like in the future. It is up to publishers to make the most of this.”

SuperData’s report puts the three major gaming markets — North America, Europe, and Asia — nearly neck and neck in earnings, in the low $20 billion range for each. Growth in Latin America has slowed, but the size is still increasing, he said. 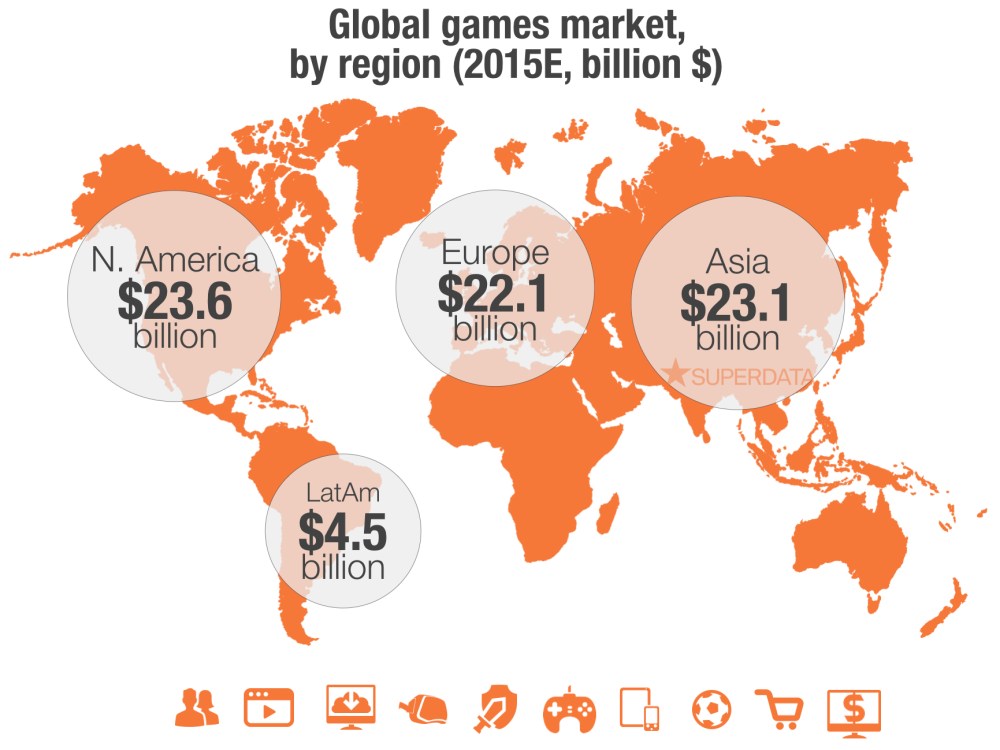 Above: The global games market by region.