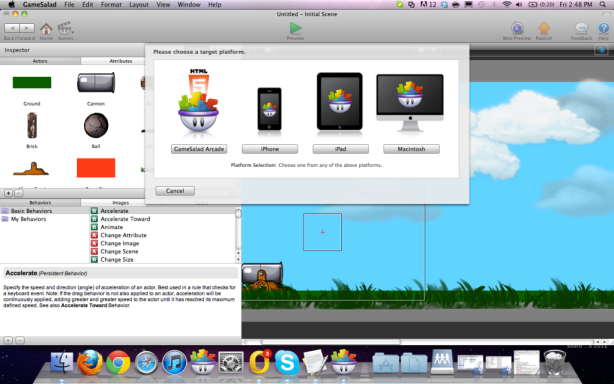 Game development tool-maker GameSalad announced it is releasing a suite of applications that will let game developers create a game for HTML5-powered browsers.

The company sells a suite of tools that let game developers create games with a drag-and-drop user interface. It makes it easy for users to develop their own games even if they don’t know any programming languages. It removes the barrier to entry for developing games for the iPhone, Android-powered mobile devices and now web browsers. HTML5 also works on most mobile browsers, eliminating the need to create a specific app for each mobile operating system.

The web development tools will be optimized for the latest fleet of browsers like Firefox 5 and Chrome. But they will also support Canvas, which means that web surfers on older browsers will still be able to play the games as long as the browsers support HTML5. After a developer creates a game, they can embed the game in any web site with an embed code similar to the way YouTube has embed options.

Google will feature a few games created with GameSalad’s HTML5 tool on the Chrome Store. Like Angry Birds — which also made its debut on the Chrome Store after an HTML5 version came out — the Chrome Store will feature high-resolution versions of the games produced by Game Salad. The performance difference between HTML5 and native applications is also narrowing, which should make HTML5 a more appealing arena for game development, said GameSalad chief executive Steve Felter.

“We’ve seen that performance gap narrow to the point that it’s approaching parity,” he said. “With all the tech companies focusing on developing the standard, the gap will be effectively negated over time.”

GameSalad’s tools can be used to make games for Apple iOS devices, the Mac, and the web. Developers have used GameSalad to create more than 18,000 games to date. The software is free to try to includes all the tools to create a game. GameSalad also has a “professional” version, which gives developers access to iAds and other tools that help them make money off the games, that costs around $500 a year.

The Austin, Texas-based company was founded in 2007 by Michael Agustin, Daniel Treiman and Tan Tran. The company had previously raised at least $1.2 million from Steamboat Ventures (Disney’s investment arm), DFJ Mercury, DFJ Frontier, and ff Asset Management. GameSalad also raised $6 million in March in its second round of funding from those same investors.