Bing Gordon, a partner at Kleiner Perkins and former chief creative officer of Electronic Arts, says games have become one of the most effective ways for children to learn about the world and will eventually replace textbooks in schools.

Gordon (pictured right) made the remarks at a dinner for games entrepreneurs and investors hosted last night by VentureBeat (see photo below), which served as a preview for our upcoming GamesBeat 2009 Games Conference.

At heart, he says, games are interactive simulations of real life and can convey high-level concepts and math education to children in very inconspicuous ways. Children playing Pokemon trading cards or games, for instance, may be using more math than young boys did while collecting baseball trading cards. (Many of the world’s most famous economists say they learned math via baseball cards).

“Kids are learning to read for the first time while playing video games,” said Gordon, who left EA last year to be a game-focused partner at Kleiner Perkins Caufield & Byers. 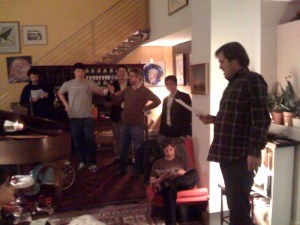 Games are a far more compelling way to teach kids concepts — such as leadership and communication — because the games are interactive. It’s noteworthy that MIT recently decided to do away with lectures for students in favor of hands-on labs. Gordon calls this use of games for other purposes “video game design thinking,” and he believes it will be a big area of investment in the coming years as education, business and games come together. Gordon’s term is based on the design thinking concepts popularized by industrial design firm Ideo.

Games were already a hot sector last year. But Gordon believes that the combination of user interaction and immersive play will make games far more compelling than the current craze around social networks and Web 2.0.

“Web 3.0 is going to feel a lot more like a video game than a browser like Netscape,” Gordon said.

While some parents may be concerned about the violence in games like Call of Duty: World at War, they can use it as a way to educate kids, particularly by asking the kids to compare the medium of the game to other media such as books or movies about World War II.

As a testament to how seriously EA takes its games, Gordon said that when the company evaluates job candidates, it looks to see if a particular candidate has led a guild inside the WoW game. Players who have tend to be targeted for management positions.

As for teachers, they’ll have to adapt and become more like producers or advisors for students who take control of their own education, Gordon said.

Among the two dozen or so guests to our dinner last night, other video game design thinkers included Gabe Zichermann, CEO of rmbr and an advocate of Funware; Amy Jo Kim, CEO of Shufflebrain and a neuroscience expert whose company is creating games such as Photograb on Facebook; and  Peter Daboll, CEO of Bunchball, which uses its Nitro platform to infuse web sites with game-like features such as reward points and leaderboards. (Here’s Amy Jo Kim’s post on the dinner).

We’d like to thank the evening’s sponsors: UK Trade and Investment team, which works to bring British companies to the US and vice-versa; and Black Card Circle, a global social network for those with financial and social capital. Thanks also to Susan MacTavish Best of Best Public Relations, for agreeing to have the dinner at her home

We’ll be posting more information in the coming days about the GamesBeat 09 conference to be held March 24 at the Mission Bay Conference Center in San Francisco.