The big three game console makers rarely ship their next-generation machines to the developing world, where problems such as game piracy and pricing are huge barriers to acceptance.

That’s where Zeebo sees its opening. This San Diego, Calif.-based startup has come up with a plan to launch an inexpensive game machine in markets such as South America. John Rizzo, chief executive at Zeebo, will talk about the console at both the Game Developers Conference and VentureBeat’s own GamesBeat 09 conference coming up next week. 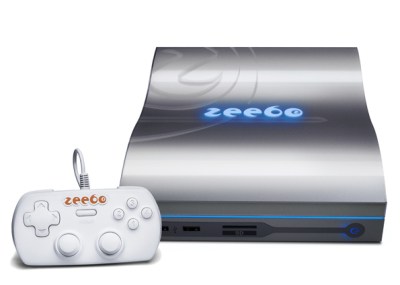 Zeebo is funded by Brazilian video game company Tectoy and wireless chip maker Qualcomm. Qualcomm has invested $5.5 million in the company, which was founded by Reinaldo Normand, who previously headed Tectoy’s North American mobile unit, and Mike Yuen, the games guru at Qualcomm.

“With this approach, we won’t be competing directly with the big three,” Rizzo said.

The console is about the size of a Wii and  plays games with the graphics quality of a decade ago. It can handle 3-D graphics but can’t match the Xbox 360 or PlayStation 3 in that respect. It’s more like the quality in between the original PlayStation and PlayStation 2, which debuted in the 1990s. The resolution is 640 x 480, about the same as many older computers.

The system is unique in that it uses Qualcomm’s 3G chip set as its central processor and graphics. That’s right. It uses a chip set meant for high-end smart phones. It has two universal serial bus ports (USB) in the front and one in the back and a slot for an SD flash memory card, which will not be used to move games around. (In the future, it can be used to store pictures or music). It comes with a game controller, a wall charger, a gigabyte of flash memory (enough for 50 games), the Qualcomm MSM7201A chip set, and 256 megabytes of dynamic random access memory. It’s essentially a small computer, albeit one that would have been cool a generation ago.

Rizzo said the reason for that is that cellular 3G connectivity will be much more pervasive in developing countries than wired broadband connections. So this console has been designed to get updates and download games via a cellular phone connection rather than by plugging into the Internet.

With the 3G connection, gamers can download games onto the flash memory of the machine. The good thing about that is that it prevents piracy, since you need valid authentication codes to download the game. (Qualcomm’s Brew software handles that authentication automatically). When you turn the machine on, you can see banner ads on the screen.

The company plans to launch the console first in Brazil, where Tectoy has been selling video game equipment since 1987. Tectoy pioneered the game market in the region by manufacturing and selling Sega’s older game systems in South America. Over a couple of decades, Tectoy sold more than 5 million Sega consoles.

Zeebo doesn’t make the consoles itself; it licenses the design to partners such as Tectoy. Clarao, a Brazilian cell phone carrier, provides the 3G network access. Launch titles include id Software’s Quake, FIFA soccer from Electronic Arts, Brain Challenge from Gameloft, Super Action Hero by Com2uS, Need for Speed Carbon from EA, and Prey by Machine Works. While Quake is a 50-megabyte game, the average storage required for a game is about 20 megabytes. The goal is to have 50 preloaded games available by the end of this year.

If you want to shop for games, you can login and pay for them. They take about 5 minutes to download over a 3G network. The 3G network downshifts to the slower Edge connectivity if that’s more stable. You can pay by credit or debit card, Boleto Bancario money orders, and other payment systems.

The console will be sold in Brazil, with a retail launch there starting this month. It will debut in Mexico in 2009 and in China and India in 2010. The company is raising a new round of money from outside investors. Right now, you can buy Zeebo in Brazil, but not in the U.S. Wouldn’t it be a change if gamers here wanted it so bad they would pay extra for their friends to ship it to the U.S.?