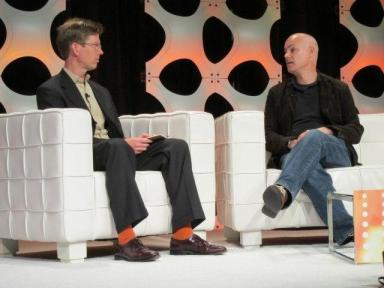 Most companies would call a hacking attack that brings a critical service offline a disaster. Sony’s president of network entertainment Tim Schaaff thinks it’s a blast.

“Great experience, really good time,” he said. “Though I wouldn’t like to do it again.”

Schaaff said it was more important to manage the fallout from a hacking attack — like communicating with former users — rather than having a secure enough network to keep hackers out in the first place. He sat down with VentureBeat’s executive editor Dylan Tweney at the GamesBeat 2011 conference in San Francisco, Calif., today.

“A determined hacker will get you, the question is how you build your life so you’re able to cope with those things,” he said.

Sony was one of a number of high-profile targets of hacking attacks that made news in May and June. Hackers were able to break into Sony’s online gaming network, the PlayStation Network (PSN), and steal sensitive information on more than 100 million PSN and Station.com users. It forced the company to take the network down for 24 days and beef up network security.

The company was criticized for having outdated security software that did not adequately protect the PSN from hackers when they broke in. Security experts knew Sony was running outdated versions of the Apache Web server software that did not have a firewall installed. The company said hackers were able to breach the PSN and steal sensitive data while the company was fending off denial of service attacks from Anonymous, an online hacker group that typically takes up politically charged causes.

Hackers also hit a number of other high-profile companies like defense contractor Lockheed Martin and Bethesda Softworks, another game publisher. The number of hacking attacks has given network providers like Sony a new set of challenges when building security for company networks.

The PSN is a critical part of Sony’s gaming service that competes with other online gaming networks like Xbox Live. There are 948 games now available in the PlayStation Network store, as well as 4,000 pieces of add-on content for games.