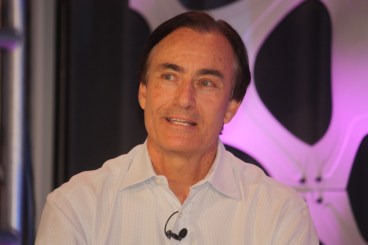 “I think we actually had our golden age when game development was using floppy disks and it was an open free platform when we could all make games like we wanted to make,” Hawkins said. “Nintendo came along and software licensing came in and we’ve been in a dark age since then.”

That’s left developers unable to build great games unless they have the support of major game publishers like Nintendo. That’s compared to social gaming companies or companies built on the web that are flourishing thanks to the open nature of the web, he said. Hawkins made the comments onstage today at the GamesBeat 2011 conference in San Francisco.

Social gaming company Zynga, which makes incredibly popular Facebook games like Empires & Allies and CityVille, is an exception to that rule because it was able to flourish thanks to a “mistake” in Facebook’s terms of service, he said. It let Zynga freely develop games and take advantage of demand for bite-sized social games like FarmVille and CityVille. Zynga has now filed for an initial public offering to raise up to $1 billion.

While social gaming is still dominated by the likes of Zynga, the race for second best is still heating up. Zynga holds a commanding lead with 272 million users across all its games, according to AppData. The next closest developer, Badoo, has 45 million users. The difference between the next 10 developers is much closer, with the 15th most popular app coming in at around 16 million users.

Digital Chocolate still stands a little further behind the giants of the social gaming mafia, which, besides Zynga, include the likes Playfish (now owned by Electronic Arts) and Playdom (now owned by Disney.) Digital Chocolate is currently the 12th most popular app developer on Facebook, with about 17.6 million users, according to AppData. Its most popular game, Millionaire City, has about 12 million users and is ranked 14 on the list of top Facebook applications.

Digital Chocolate certainly hasn’t shied away from challenging the likes of Zynga. It recently sued Zynga, saying it had rights to the name “Mafia Wars” — one of Zynga’s most popular games on Facebook with about 28 million users.

Sutter Hill Ventures and Bridgescale Partners participated in Digital Chocolate’s most recent round of funding. The San Mateo, Calif.-based company has raised $55.9 million to date over four rounds of funding.