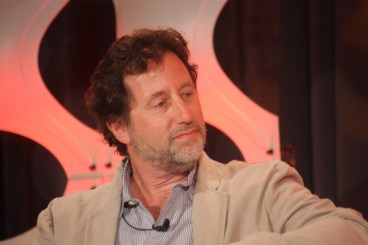 Video game consoles have reached a point where they are so powerful that companies no longer need to focus on adding more horsepower to the devices, said game industry veteran and Harebrained Schemes founder Jordan Weisman.

“All the heavy lifting has been done — now comes the fun part of figuring out how to use it well,” he said.

Game hardware and software developers should now focus on finding new ways to engage gamers, Weisman said. That can include new ways to control games — such as controlling games with motion and physical actions — or new types of gaming devices, like kids’ toys that also fit into video games. Weisman made the comments at the GamesBeat 2011 conference in San Francisco, Calif., on Tuesday.

Weisman is the second experienced game executive to make dark-sounding pronouncements about the state of the game industry today. Earlier, Electronic Arts founder Trip Hawkins said we are living in a “dark age” of video game development.

One example of a game fitting into Weisman’s scheme is Skylanders, a video game from Activision-Blizzard. That game stores game information on a toy that connects to a Nintendo Wii or an Xbox 360 video game console. When players want to change the character they play as in the video game, they connect a different toy to the game. Then, kids can play with those toys outside of the video game — just like other normal toys.

Weisman has a long history in the game industry. He started making toys and games in 1980, when he founded FASA, which made the Shadowrun and BattleTech toy and game franchises. He founded Virtual World Entertainment, a virtual reality franchise, in 1987 and sold the company to Disney in 1992. He started a video game version of FASA, FASA Interactive, in 1995 and sold it to Microsoft in 1999.

“I’ve spent half my career building games that don’t require technology and the other half designing game platforms that require multiple billions of dollars to develop,” Weisman said. “At the end of the day, the brain doesn’t care about the format.”

Weisman’s last company, Smith & Tinker, was able to raise $29 million in venture capital because its founders — Joe Lawandus and Weisman — are heavyweights in the game and entertainment industries. That company focused on hybrid games that fit in with toys.