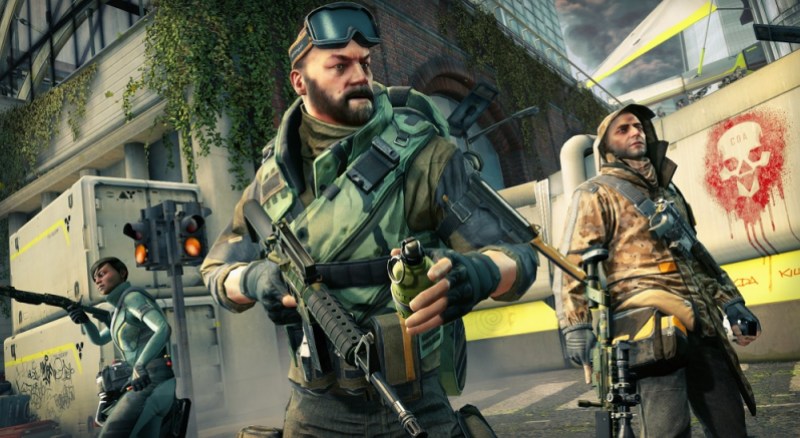 Xu: I don’t know if I could make the judgment in that way. It’s more that Asian users can accept free-to-play game design more easily than Western users. That doesn’t necessarily mean Asian users like real pay-to-win. Nobody really likes that or the idea that if you don’t pay, you just stand still. We’ve designed our games the right way.

In the Chinese market, we’re trying to build a virtual community in our games. The whales, the people who have less time and more money to spend in the game, they can work together and build a virtual group with people who have more time and less money. We design the game mechanics, so they need each other. Everyone’s more happy playing together instead of playing PvE. We call it PvP not because it’s about player killing. In the West, a lot of users make the mistake of thinking that PvP just means player killing. In most cases, when we design a free-to-play multiplayer game, most of the PvP experience feels more like cooperative play. Your cooperative group competes with another cooperative group — like guild versus guild.

People link together because they need each other, just like in the real world. They have fun playing together in a user-generated way. We give them a virtual world where they can have fun in a way they organize themselves. There’s no pay-to-win in this way of thinking. It’s about community, about guilds, about membership, about cooperation.

We feel like this way of doing things is more fair than charging everyone the same price. If someone’s willing to pay more because they have less time to play or they’re willing to pay more to benefit other players that play together with them — there’s no way for them to do that in a premium game because everyone pays the same. For free-to-play users, they’re contributing a lot to the virtual society — their efforts, their time, their skills. It’s fair for them to earn something instead of paying something. Payment follows a curve, not a straight line. It’s more fair for everyone — if you want to pay, you pay, and if you don’t want to pay, you don’t have to. That’s the philosophy when we design a free-to-play game.

GamesBeat: I talked to Kabam a lot, before they disbanded, about their Chinese version of Marvel Contest of Champions. They thought they had the answer in redesigning a Western game for the Chinese market with something they called a VIP system. They believed that suited the Chinese taste. If you wanted to spend money, you could get more privileges and things you described there. They thought they could basically Asianize the game, but it didn’t really work for them, even though they spent a long time designing it.

Xu: Most western game developers think in the same way. They think that if you want to go into China, you have to redesign your game, redesign your monetization, culturalize your content. They spend almost as much effort as they would on a completely new game. That’s the wrong way to do it. If you design from scratch as a free-to-play game for a worldwide audience, you can reach the entire world.

If you look at Game of War, they haven’t had to culturalize it. It just works. It went direct to China. Or Clash of Clans. Or Clash Royale. They don’t even have to change the monetization design. It’s universal. If you design a game from the beginning in a purely Western way, then you face a big challenge coming to China. Some Chinese games want to go to the West and face the same challenge.

We’ve had successful experiences in designing a game for free-to-play in the West and then seamlessly going to Korea, going to China, going worldwide. Even on console. Warframe is the top-grossing free-to-play game on PS4 and Xbox One.

Warframe uses very different mechanics. You can think of it as something like Game of Thrones on TV, where they’re making a TV series with a movie-level investment and movie production quality. It’s a game changer. We’re using a triple-A team to make a free-to-play game. They’re designing and developing the game with even more investment and effort than some premium console titles. People love it — free users, paying users. The conversion rate on that game is the same as you see on other free-to-play games. The majority of users still play without paying anything. 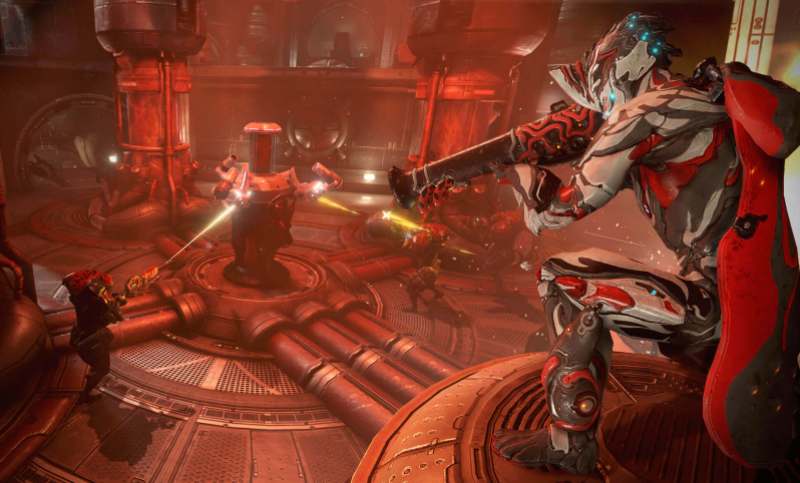 Above: Action from Warframe’s The War Within update.

GamesBeat: How many years has Warframe been going?

GamesBeat: Do you see Grand Theft Auto Online as the same category?

Xu: They’re still doing a premium game. Elder Scrolls Online is another example. You still pay to download the game before you can play it. Warframe is completely free. You download this huge 35-gigabyte game without paying anything.

GamesBeat: They seem to have graduated up to … I don’t know if they’re making more money from virtual goods now. The initial payment seems like it would become a smaller part of it.

Xu: That’s why you see most traditional game developers — their stock prices, their P/E multiples are going much higher these days. You see that on the market. That’s the secret. Live operations, live services. But they’re not going all the way with it.

You see League of Legends, Dota 2, Team Fortress 2, World of Tanks. A lot of examples are out there. Warframe isn’t the only one. Mobile has even more examples. People’s psychology is the same anywhere. Why should game players behave in a different way on console? It doesn’t make sense. Our firm belief is that if you design a game in the right way, it’ll work for everyone.

GamesBeat: It seems like an interesting year for Take-Two and EA and Activision. They have very light release schedules. They’ve delayed all their games into next year. But they’re not reporting bad quarters. They’re generating all this money from live operations. EA’s been talking about that for two quarters now.

Xu: Ubisoft as well. They’re learning. We just announced last month that we signed a deal with Take-Two. We acquired a company that’s doing Civilization Online, a free-to-play Civilization MMO. We’re trying to work with the big players — major IP holders, triple-A game developers — as well as independent game developers. We just signed a license with Hasbro to do a PC and console free-to-play Transformers game with them. We’re actively trying to do more of these deals, working with all possible parties for project funding, investments, acquisitions, IP licensing, co-development, co-publishing, all the possibilities to contribute our knowledge of online multiplayer game design.

A lot of Western studios have a separate department, a “monetization design group” apart from the core development teams. That’s not the right structure. We think monetization has to be the fundamental backbone from the very beginning when you’re designing a game. It’s the core mechanic. You have to start by thinking that through before you set up the rest of the game design. If you finish the game and then a separate team takes on the question of what you’re going to sell, that’s not going to work. 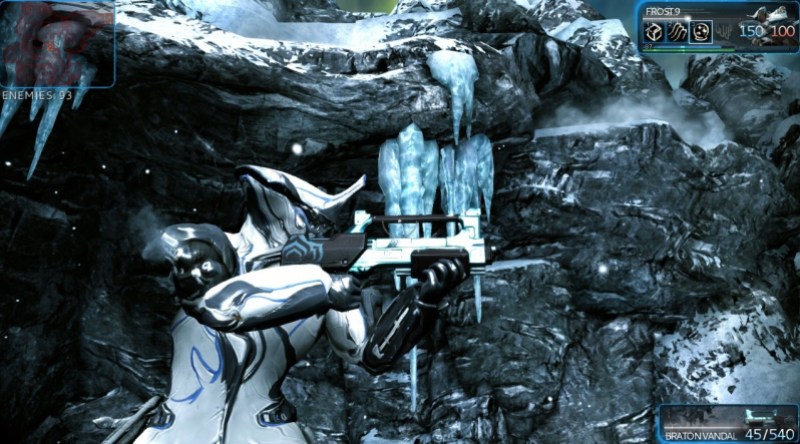 Above: Warframe’s success has emboldened Digital Extremes to try its hand at helping its fellow studios.

We have a lot of experience in how to design a game in a fundamentally different way for a very long life cycle. Warframe is four years old, and that’s not nearly the oldest. In China, a lot of games made by Perfect World and other companies are more than 10 years old — Westward Journey from NetEase, many others. You have to design a game in a different way. Whenever you have an online game with a very long life cycle, people are living in that virtual world, creating content on their own. That continuous revenue gives you the freedom to set up new projects in the future.

Most independent studios here, even triple-A studios, they’re working for other publishers. They’re targeting a one-time sale, project after project. They always have to find that next project, someone else to work for because they can’t fund a project on their own. We’re giving them a different way of living. That’s one reason we got together with Splash Damage. They’re a triple-A studio. They know online multiplayer games. With our experience, we can take them a step further to do something as successful as Warframe. We can fundamentally change the lifestyle of that studio.

We’re setting out for the blue ocean. We’re doing something different. If the user’s mentality and psychology is the same, in the future, perhaps half of the console market can come from item transactions, live services, this kind of monetization. Studios here have been doing traditional game development over and over for maybe 10 or 20 years. It’s time for them to think in a different way. Some of them may have already had bad experiences trying to do free-to-play games or mobile development, trying to follow successful cases like CrossFire in Asia and failing. We’re giving them a different way of thinking. With our help, we can do things the right way.

Above: The bad guys from Warframe doing the ALS ice-bucket challenge.

Look at Digital Extremes. They’re free now, forever. Developers dream of having the freedom to do original games on their own, funded and published by themselves. We’re supporting that, helping them be independent. They’ll generate revenue to fund their future projects. Helping them with one successful title sets them up forever, instead of working like a traditional publisher, funding one project after the other every year. After 10 years of that, they might not build up enough budget for even one original game. We’re coming in with a different model.

GamesBeat: We give a conference every year, and we like to have a lot of different ideas there. An example, kind of a crazy one, is this idea of the leisure economy. We have all these people who are starting to get paid to play games — esports athletes, streamers, content creators. If AI is going to eliminate a lot of jobs in the future, what are we going to do? Maybe we’ll just play and get paid for it.

Xu: More people will live in virtual worlds, after an AI revolution. You don’t have to care as much about losing your job in real life. You go to a virtual world, find a position as a gamer in the game. You contribute in your way and earn money benefiting that virtual world. Something like a real society could happen. That’s why I think free-to-play game mechanics are the future. We can have mechanics in a game that require a premium subscription — VIP entrance fees, things like that — but the world doesn’t require that everyone pay the same. A virtual society still needs the freedom for everyone to choose their own way of living in it — no entrance fees, no requirements to pay.

That’s my own way of thinking, but I think it’s reasonable. You can’t go far on a pay-to-win philosophy. We need to let the world know that we’re doing something different.

Disclosure: The organizers of Devcom paid my way to Germany. Our coverage remains objective.