The long-awaited game, The Last Guardian, was the debut title at Sony’s press conference at the Electronic Entertainment Expo (E3) last week. But I’m sorry to say that for me, it was a disappointment.

That’s a sad fact, since the team that delivered award-winning games such as Shadow of the Colossus and Ico has been working for eight years, since 2007. The title is being directed by Fumito Ueda, the designer of the previous titles. At E3, Sony executives Shu Yoshida and Shawn Leydon proudly announced that The Last Guardian will debut in 2016. The announcement drew huge cheers from the crowd of thousands at the Sony event. The title was playable at the show, and Ueda himself gave a private demo. 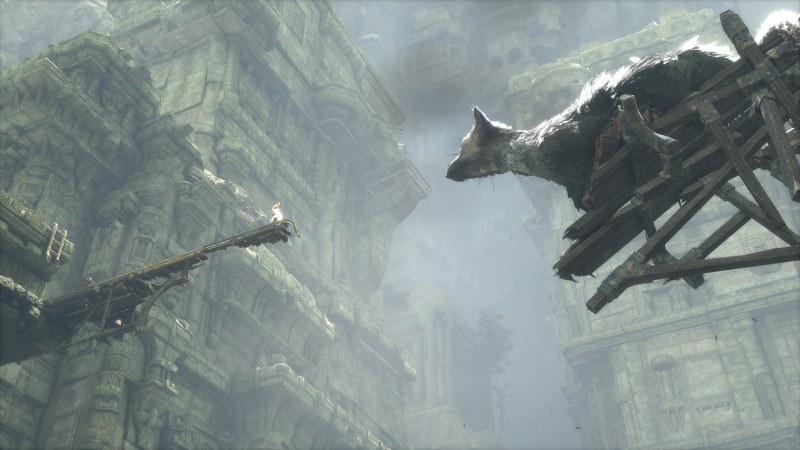 The title seems promising enough. It’s about a young boy who is kidnapped and brought to strange, crumbling, and dangerous ruins. He befriends a giant dog-like creature with wings. As the player, your job is to control the boy and get him to manipulate, the creature, Trico, as if he were a real animal. You can get the animal to act by calling its name or luring it with food and get it to jump or climb with the boy on its back. Half the time, you’re worried that Trico will accidentally crush the boy.

The creature itself is unpredictable, and it’s not always going to do exactly what you want. It is powerful, but not so smart. The boy is nimble and intelligent. Together, they solve puzzle problems like how to escape from a room or get away from a crumbling platform. In that sense, the gameplay resembles that of Ico, where a warrior and a princess had to escape together.

“It is conceived as a poetic story, of adventure and friendship, heroism and companionship,” Leydon said. “I”m personally proud to introduce this long-awaited game.”

Before I go too far, I have to say that the title has great qualities, such as excellent sound and dramatic music. The boy’s voice echoes across the canyons of an ancient ruin, and the creature’s voice conveys its emotions. But Sony showed some very unexciting levels where the creature had to escape from a room, and another where the boy and Trico had to jump across platforms that were falling apart. We didn’t see any enemies or much else. The art is very stylistic, rather than in full, realistic 3D. In that sense, it didn’t seem to take full advantage of the PlayStation 4. 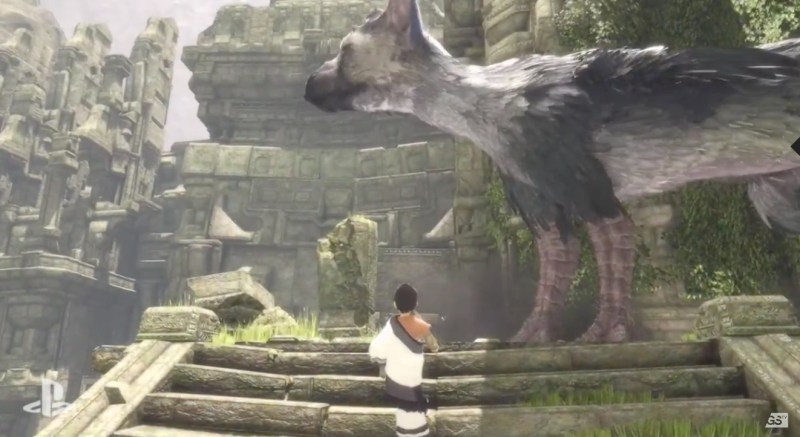 After the demo, Yoshida took the stage and proclaimed, “You don’t know how long I have waited for this moment.” He thanked Ueda for his work. It was an apt emotional moment, and the game itself is setting up an emotional bond between the player, the boy, and the creature. Sony promises to reveal more about the game at a future date.

But to me, the title seemed like it would have looked great on the PlayStation 3. The title was first shown as a snippet of video at the 2009 E3 event. It was originally targeted for a 2011 release, but it got delayed. And in 2012, Sony rebooted the title so it would run on the PS4. Ueda left Sony and started his own studio, GenDesign. The game is a collaboration of Sony’s Japan Studio and GenDesign. The latter’s staff is primarily run by veterans of Ico and Shadow of the Colossus. Unfortunately, the art style is hazy and a bit fuzzy, which makes it look even more like a last-generation title. That artistic choice is intentional, I would guess, but knowing the history, it adds to the feeling that time has passed this game by.

Add to that the choice of the demo. It was more like a tutorial, showing how the boy can climb over Trico’s body or how Trico can do the boy’s bidding and jump across dangerous ruins. But it was pretty dull, and it shows how, much of the time, you’re likely to spend the game time in isolation, solving puzzles between two entities that don’t truly know how to communicate.

The crowd cheered the demo anyway, but Sony has to show a lot more exciting gameplay before it deserves that love and loyalty. I look forward to playing the game, and I hope Sony will prove me wrong.