Gabe Leydon’s Machine Zone was a solid mobile indie game publisher on mobile, but he took a major departure from the status quo on his latest project.

Leydon raised venture capital funding and set a huge team of 80 people to work on a single game. They toiled on Game of War: Fire Age, for 19 months. They built a mobile messaging platform, created a translation engine so players could team up across territories, and created an extensive fantasy strategy game. That turned out to be one of the biggest gambles yet in the creation of a new mobile intellectual property. 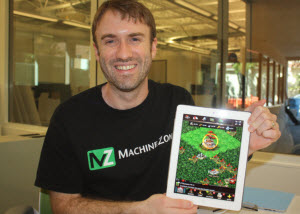 Leydon will talk about his big gambling habit (OK, strategic calculations) at a fireside chat moderated by Chris Kohler, editor of Wired Game Life, at our GamesBeat 2013 conference. The event is Oct. 29-Oct. 30 at the Sofitel Hotel in Redwood City, Calif.