Tammy McDonald, the CEO of Axis Game Factory/Heavy H20, was our host for our fourth annual Visionary Awards event at the close of our summit. The GamesBeat Visionary Awards started in 2018 as a way to honor game industry leaders who showed real vision for the future.

McDonald said the past winners for this award include Rand Miller, the cofounder of Cyan and co-creator of Myst; Ted Price, the founder of Insomniac Games; and John Smedley, the studio head at Amazon Game Studios San Diego. Our panel of judges included past winners such as Miller, Price, Smedley, and Eve Crevoshay of Take This. Other judges included McDonald, me (Dean Takahashi) of GamesBeat, and Don Daglow, a game developer, author, senior director for strategic partnerships at the Strong, and president of the AIAS Foundation.

Geoff Keighley, the creator of The Game Awards, gave the honor to Miele.

“I’ve known Laura since I really started in the video game industry,” Keighley said. “And this is such an important honor to such an important individual in the gaming industry. Maybe you know her as one of the highest-ranking executives in Electronic Arts, running the entire studio organization. But I met Laura a good 25 years ago when I was just starting out in gaming. I remember going to that first E3 in 1996 when Laura worked at Westwood Studios, and I got to meet with her. I still remember actually coming home and sending her a fax thanking her for the meeting. Because that was the world we were in. She very kindly faxed me back and said thank you for visiting our booth and learning about our game.” 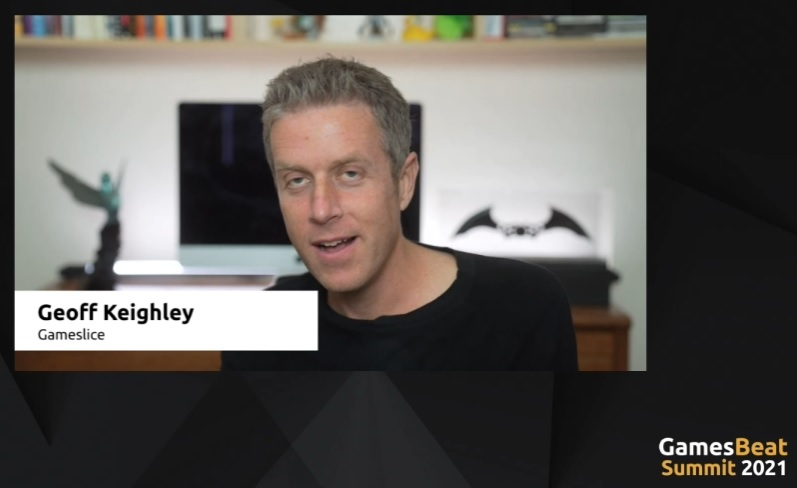 Above: Geoff Keighley is creator of The Game Awards.

Miele rose through the ranks in public relations and marketing.

Keighley added, “Laura has really been a mentor to me, personally, for many years. And even though I was just kind of a lowly video game journalist with a website Gamesslice.com, which is still my email address today, she treated me with a lot of respect and always was curious what I thought about their games, where I thought the company could go, and she was always thinking very big about where this industry was going.”

Keighley said that Miele has been helping EA build its business for the past 20 years.

“She really devoted her career to building this industry in such incredible ways,” Keighley said. “She has had the vision to see where games are going and has also been instrumental in growing this business and EA into industry’s most powerful and creative force.”

Keighley surprised Miele by introducing a couple of her good friends and colleagues from years past: Vince Zampella (CEO of Respawn Entertainment) and Brett Sperry (a cofounder of Westwood Studios), who offered their support for Miele.

Zampella, CEO of EA’s Respawn Entertainment, the maker of Apex Legends, joked that he told Laura “I was going to bust in.”

He said that Miele has a “weird mix of such strength when you need her, she will show up for you.” He added, “But at the same time, there’s a curiosity and a vulnerability that makes you okay with having discussions that you would normally be afraid to have, which leads to bigger understanding, doing different things in the game, different possibilities that wouldn’t be possible without that support. And so she’s been a huge mentor for me, especially shepherding me through the crazy world of EA. And I’m glad she’s getting an award like this, and I just want to thank her.” 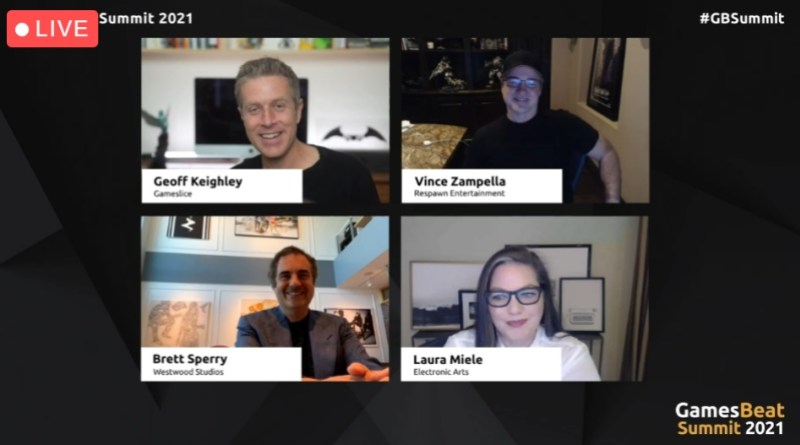 Sperry hired Miele into the game business in the mid-1990s. He noted that she had a background in architecture.

“We hired her on the spot,” Sperry said. “She started taking over our marketing division and got deep into games and what we were doing. We were really hitting our stride and the rest was history. Laura, you’ve come a long, long way. It’s quite amazing. I’m delighted to see you win this award.”

“I know you’ve worked very, very hard for a very, very long time,” Sperry added. “You have incredible patience and have dealt with an industry that’s ever changing and veering and swerving and through tough times and great times, and it’s a delight to see you again and congratulations, Commander Miele.” 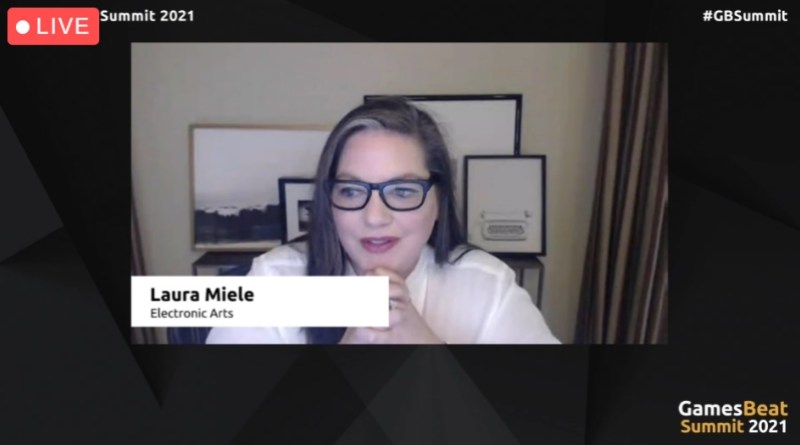 Above: Laura Miele of EA

Accepting the award, Miele said she was rarely speechless and was touched that Zampella and Sperry came to the ceremony.

She thanked Keighley and me and GamesBeat for the award.

“This is such an honor,” she said. “I am very humbled to be recognized in this way. And I love to hear from Brett and Vince, two people who have had such a profound impact on me professionally and personally. I just don’t know if either of you realize how you have shaped my career and just how I show up in the world. I did start my career 25 years ago at Westwood, and I just feel so privileged to have started my game career at a studio. Brett spent countless hours teaching me the industry and just sharing his deep knowledge and insights. He has an extreme commitment to perfection and excellence and it was just instilled with me from the very beginning.”

She said running Westwood Online was important because it put her in direct contact with players.

“I got such an early start and the foundation of my career about having a deep love and respect for developers and what developers go through listening to our players,” Miele said.

Miele said she never thought of herself as a visionary.

“But I am a dreamer. And I do dream of helping people think about things in a far bigger way than they ever thought possible,” she said. “I love seeing a spark of something interesting, and daring to put my energy behind it and  help make things happen. Someone said to me when you’re passionate about something and you believe in someone, it feels like we have a superhero cape on. I love that and I so want to lift up our creators and have people feel like that they have capes on and can just accomplish anything. So I accept this award very humbly on behalf of all the electronic artists at EA and behalf of all of our players. And definitely on behalf of the incredible visionaries that I have had the extreme pleasure of working with and learning from.” 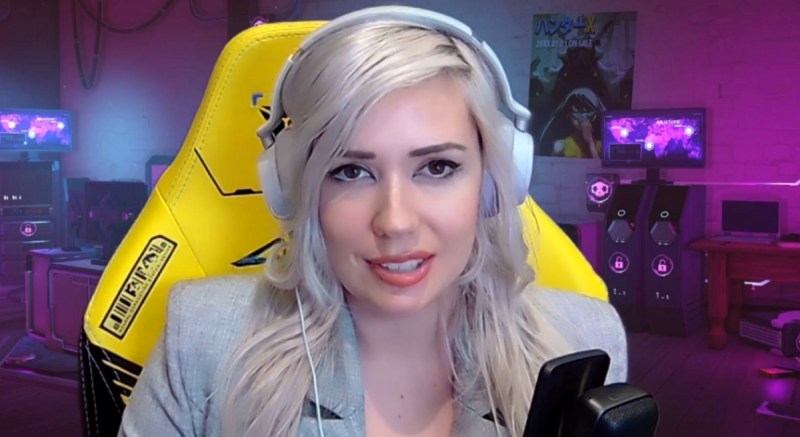 Above: Alanah Pearce of Sony Santa Monica Studios presented our Up & Comer Award.

We also presented our second annual Up & Comer Award to Zinda. Our past winner for this award was Crevoshay of Take This. This award honors someone who is a rising voice in the game industry. It isn’t based on age or experience. Rather, it recognizes that the biggest potential of the honoree lies ahead of them.

Alanah Pearce, a streamer and a writer for Sony Santa Monica, presented the award to Zinda. ZombaeKillz started her content creation journey on Twitch a little under a year ago. She has since moved into a leadership role for promoting community curation and digital inclusion in conjunction with activism and charity in games. As the founder of the Radically Kind Gamers, she hopes to continue to help promote kindness in the industry.

“Zombae is one of my absolute favorite humans on the planet and I could not be more honored to award her the Up & Comer award, nor can I be more blown away by her rise,” Pearce said. “She is someone who when she started streaming has this truly terrible setup. She had a really bad audio. She only recently started even streaming from a PC. But she’s still had this catastrophic rise where I can just see kind of the world shifting around this girl because she’s such a force for good.”

Pearce added, “She is so warm, and compassionate and honest and genuine. But also something she never gets enough credit for. Absolutely hilarious. It’s this combination of things that just makes you love her the minute that you watch her content. It makes you want to listen to the things that she has to say and you know that they are coming from a good place. Even as a full-time mom, that is not an easy thing to do. She’s just having so much success and will continue to have success with things like Twitch and her Radically Kind Games initiative and the different charity organizations that she raises money for and just being a wonderful activist for a lot of different causes.”

And Pearce said, “It has been a pleasure to watch her get to where she is today and I can’t wait to see her triple or quadruple the amount of success.”

Crevoshay of Take This wrote about Zinda: “I was very pleased to vote for ZombaeKillz because my work with her has impressed me so much. She is an excellent spokesperson for kindness, persistence, resilience, and humor on Twitch, and has been responsible for some excellent ‘firsts’ in gaming.” 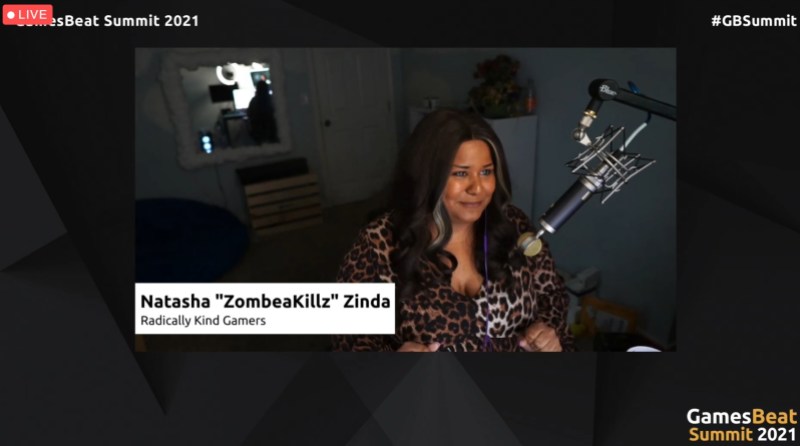 Above: Natasha “ZombaeKillz” Zinda of Radically Kind Gamers accepts the Up and Comer Award.

In her emotional acceptance speech, Zinda said she was figuring out all of the ways she can be radically kind as a rebellious act in a world that hates you, as she has experienced as a Black woman.

“This was a huge surprise. Also, those were very nice things said about me from Alanah,” Zinda said. “Excuse me, I’m not crying. I just am on the precipice because I’m a big crybaby. But thank you all so much for this, I want to thank everyone over at GamesBeat for how credible an opportunity it is for somebody like me, in this space and doing the things and caring about the things I care about.”

She added, “Being radically kind is something that I think we could use more of in the world. I believe that gaming is something that changes people’s lives, and we have an opportunity in games, to reach into people’s homes and into their hearts. And so it’s a real change. Being radically kind is not the easiest thing. It is a rebellious act in a world that hates you. And as a Black woman in this space, it has definitely been a journey for me. Thank you all. I can’t wait to see how much more equity and diversity that there is being brought to the table in this space. With this award, you all just brought me to a table in a way that you probably don’t understand how impactful it is. So thank you all. Thanks to all my friends who believed in me, thank you, for the people that uplifted me and gave me chances when they didn’t know who I was and who have just had my back in a beautiful way.”