Rand Miller has been making games for decades. The CEO of Cyan is best known for making — with his brother Robyn Miller — the pioneering computer games Myst and Riven in the 1990s. They embraced a brand new medium, the CD-ROM, and made games that told cinematic stories and had amazing visuals.

I interviewed Miller in a fireside chat at our recent GamesBeat Summit 2018 event, and I gave Miller our first-ever GamesBeat Visionary Award. For the first time in a decade of events at GamesBeat, we gave an award to someone who pioneered something momentous. Miller was at the dawn of the age of CD-ROM games, and he’s still on the forefront with virtual reality games, such as Obduction.

The Millers had huge success with Myst, which for a long time was the best-selling computer game of all time. Riven was also a big success, but Cyan had troubles as well. Uru: Ages Beyond Myst, attempted to take the Myst style games into the online world. It failed. And Myst Online was aimed at creating a persistent Myst universe, but it was ahead of its time, Miller said.

Above: Myst, first published in 1993, is an enduring video game brand.

Thanks to the ups and downs, Cyan is still a scrappy indie game studio. It recently held a Kickstarter campaign to sell a bundle of all the Myst games in a single package, and it hit its goal of $247,500 in just eight hours. The campaign has now raised $1.1 million, and it’s campaigns like this which will enable the company to keep making its own games in new media, such as VR.

“A few more advancements in VR. And I’m going to feel really satisfied, making a world people can get lost in,” Miller said. “That’s exactly what we said with Myst.” 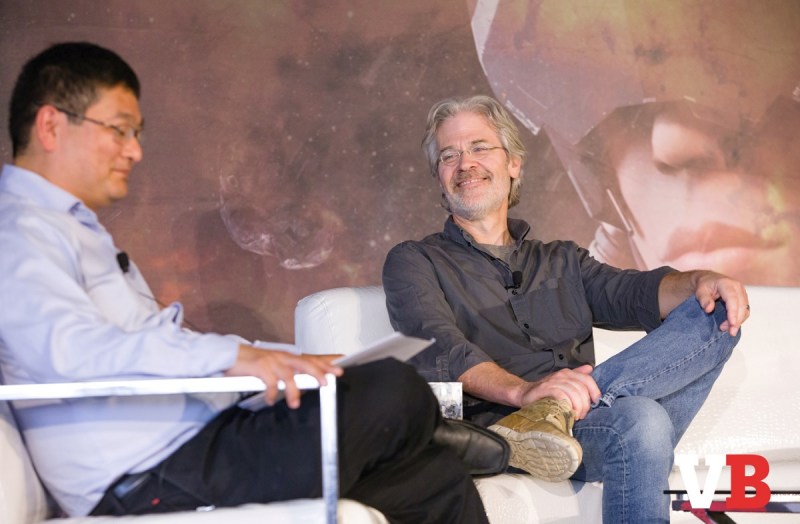 Above: Rand Miller has been making games since the 1980s. His latest work is the VR title Obduction.

His brother Robyn Miller veered off into making films after Riven. Robyn told his brother at the time that making films was really easy by comparison. Games, by contrast, Rand Miller said, are really hard to do because they have so many variables.

“I applaud anyone who does it,” he said. “You’re crazy, but I’m crazy too because it’s just so awesome to have all that at your fingertips.”

I enjoyed handing out our first GamesBeat Visionary Award to Miller, and I think we should have started doing this years ago. I’m looking forward to see what Miller does in the years ahead. Check out our full video conversation on YouTube.