For most multiplayer games, it’s better to play on a big TV so you can see what’s going on. But with Chambara, a small screen actually makes battles more exciting.

Chambara (coming to PlayStation 4 and Xbox One on July 26) is a first-person split-screen multiplayer game that’s more about outwitting other players than it is about hurting them. Each stage has two contrasting colors: one that matches your character, and another that matches your opponent’s. Standing near a blue wall with a blue character, for example, will make you almost invisible to everyone else on the battlefield. When you’re not hiding in your own color, you might as well have a big target on your back.

Chambara quickly becomes an exciting mind game, especially in 2-on-2 battles with four controllers. At E3, developer Team Ok (made up of former and current students from the University of Southern California) had a small TV in their exhibit, which meant all four of us had to huddle around it while we were playing. This made it easy to look at the screens of my enemies — a totally viable strategy — to see where they are. But if they suspect you’re looking at them, they can just close their eyes in the game, blanketing their side of the screen with their color.

Each team has a certain amount of lives and it only takes one hit from someone’s stick to die. It’s incredibly tense. Most of the time, I had no idea how the other team found me, and I ran away whenever I saw their silhouettes. The pace slowed down considerably when I switched to playing a series of 1-on-1 matches. I had to be more patient and careful while also trying to suss out the other person’s whereabouts.

Chambara seems like the kind of game that’ll test even the closest friendships, especially on a small screen. 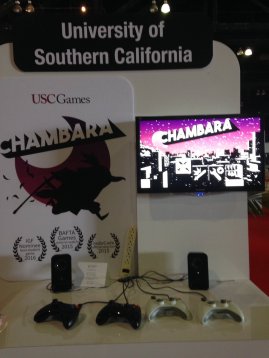