Maybe I was just delirious after a 14-hour day of covering press briefings, but I really wanted to laugh at a presentation I got for Tom Clancy’s Ghost Recon: Wildlands. One of the developers was taking this game a little too seriously.

It was around nine o’clock at night. I was on the 70th-something floor of a maze-like building in downtown Los Angeles (I had to take three different elevators to get up there). Publisher Ubisoft was hosting a media showcase for its E3 lineup, including Assassin’s Creed Syndicate, For Honor, and the new Ghost Recon game. The open-world military shooter wasn’t playable, but I did see it in a special theater-like area Ubisoft reserved for hands-off demos.

Journalists weren’t allowed to take pictures or record anything during the presentation, so I’ll try to recall this moment the best I can. Ubisoft had two developers on narration duties while four of their coworkers were playing Wildlands on PC. The demo took place in Bolivia, and the players drove over pretty looking salt flats and mountain ranges to meet each other. They were after a villain named Alvarez, and they gathered information on his whereabouts by interrogating his henchmen from different houses and villages. 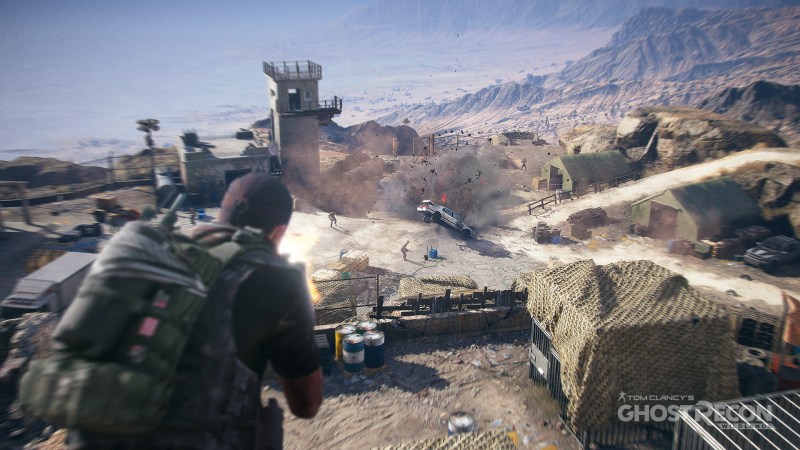 Above: Only a real soldier can take on a whole compound by himself.

I wasn’t too impressed. It looked like it’d be a pain to try to meet up with your friends, and the demo didn’t necessarily justify why this Ghost Recon has to be in an open-world. But I also kept getting distracted by one of the presenters, who was trying a little too hard to sell his game. He told us several times that the characters were “real” soldiers who excel at their job. He spoke in a deep, almost gravelly tone. It was bordering on camp.

I just smiled to myself and tried not to laugh as the demo went on. It clearly showed how capable the soldiers were: I saw them fly helicopters and kill dozens of bad guys without breaking a sweat. You don’t have to spell it out for me.

At that moment, I wished Wildlands was more like Just Cause 3, which embraces its open-world mayhem. Ghost Recon is a much more serious franchise, but that doesn’t mean its developers need to act the same way. Lighten up, guys!