Your first glance at PlayJam’s Android-based GameStick home console might lead you to think it looks silly. The analog sticks are oversized, the controller housing itself seems comically too big and round, and the bulk of all the processing power is in an HDMI stick that’s just barely larger than a flash drive. But what you won’t see is that it works pretty darn well as a console.

Sure, the GameStick doesn’t have the machined elegance of fellow Kickstarter project the Ouya or the intense processing power Nvidia is putting into the Nvidia Shield (which also streams PC games), but what it lacks in style and power it makes up for in functionality. The buttons are shockingly responsive and the console takes up very little space since it plugs directly into an HDMI port.

The GameStick isn’t trying to wow you with 4K television support and PC game streaming, and beyond its nicely made controller, it has a simple and easily navigated interface. When it launches Friday, it will be the cheapest Android home console on the market — and probably the system most suitable for children. It isn’t without setbacks, but overall it is a cheery and usable alternative to buying an Android tablet just to play games. 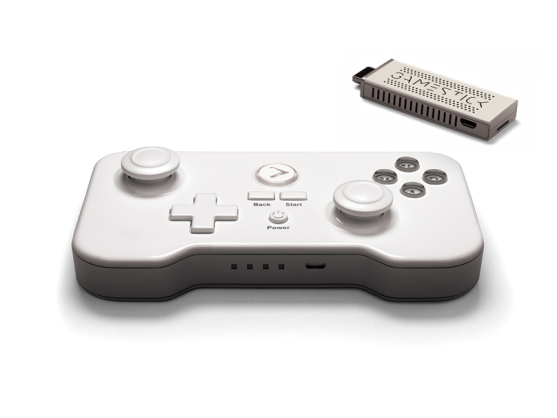 Above: The analog sticks might look comically oversized, but the GameStick’s controller is remarkably responsive.

When you open your GameStick, you’ll see the controller and the HDMI system stick as well as a wall plug and two micro-USB cables. Disappointingly, the GameStick does require more power than the HDMI port on your television can provide. Extra controllers and the dock are sold separately.

The most surprising aspect of the GameStick is how well its controller functions despite looking a bit goofy. These seemingly too-wide analog sticks are some of the most responsive I’ve ever used that weren’t attached to an Xbox 360 controller. They are not floaty and have just enough resistance that you feel like your movements are accurate. Getting the proper weight and resistance in an analog stick goes a long way in making a controller both fun and easy to use.

The face buttons are just as responsive as the analog sticks. They make satisfying clicky sounds each time you press them in, and they stand up well to repetitive button mashing. To test the controller, I played many of the platformers and shooters available on the GameStick store and had no trouble making tricky jumps and firing.

Compared to the Ouya, GameStick’s controller is just … better. It’s both responsive and pleasing to the touch and doesn’t require you to take it apart to put in new batteries (it has a rechargeable battery built in). PlayJam also added a rubberized coating to the underneath side which provides a little bit of grip.

GameStick’s biggest advantage is the ease with which you can set it up and navigate the menu. Everything is clearly labeled, and at launch you’ll only have four menus to sort through: Games, Media, Profile, and Settings. When you hook the console up for the first time, it will walk you through setting up an account for your GameStick, connect to Wi-Fi, and set up parental controls.

Parental controls are prominent in the GameStick’s design. Your profile will display what your content setting is, making it clear if you’re able to access mature content. The games also clearly present their rating, and GameStick filters out mature-rated games if the profile cannot access or download anything rated higher than teen. Parents worried about giving their children tablets (who might also have difficulty enabling parental controls) might consider the GameStick as an good alternative for these easily controlled content controls. 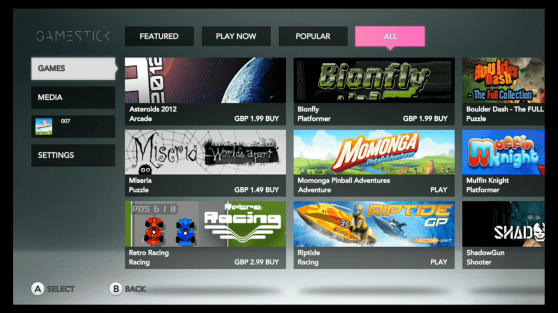 The GameStick comes with 8GB of onboard memory, which will hold a lot of games if you’re not downloading all the graphic-heavy shooters and driving titles available. If you do run out of space, the stick also uses micro-SD cards that hold up to 32GB. You can also add movies, music, and television shows to the device through the micro-SD port.

If that’s still not enough room, PlayJam designed a special dock for the GameStick that turns it into more of a set-top box than a sleek HDMI attachment. The dock powers the GameStick, provides wireless charging for the controller, and expands the console’s memory to 64GB. That’s as much memory as the GameStick supports on its own, but with the dock, you can also hook up an external drive for all the content you might want to access with the build-in media player and then hook the console up through an ethernet port.

Many of the games available on the GameStick have already come out on other Android devices. But things like Muffin Knight, The Other Brothers, and Radiant have shown up on both Google Play and/or the Apple App Store but come alive on the GameStick with the aid of the Bluetooth controller. Some Android apps already use controllers (like The Other Brothers) and take well to the home console format.

PlayJam also has a considerable number of games lined up for the GameStick’s launch window, including Canabalt, Icy Tower, Nimble Quest, and Miseria.

Check here for 5 games you should play on the GameStick.