Something strange is going on with GameStop. If you look past the shelves lined with used games and away from the mounted televisions loudly reminding you about the latest trade-in bonuses, you’ll find a special space devoted to one purpose: selling downloadable content.

Empty boxes with slipped-in cover art represent codes for new multiplayer maps, weapons, or even single-player story missions for games you might already own. To those of us used to buying DLC online from the likes of Steam, the PlayStation Store, and Xbox Live Marketplace, it looks a little out of place.

After all, who actually spends the time and gas to buy DLC from a brick-and-mortar store? Apparently, a lot of people do.

“DLC as a business was created largely not to include a retail partner,” Brad Schliesser, GameStop’s director of retail digital distribution, told GamesBeat. “Since we’ve been in the business, [we’ve found that] nearly 50 percent of customers who are purchasing digital content have never bought it anywhere before. They never bought it directly from Microsoft, Sony, or Nintendo. They never bought a gift card to redeem on those platforms. There’s a whole other market of people who we’re able to sell this content to.”

According to Schliesser, one of the reasons DLC sells so well at GameStop is because of the retailer’s PowerUp Rewards program, which allows customers to earn points for every purchase they make. They can redeem these points for prizes or discounts on merchandise and games. Another important factor is being able to buy DLC without using a credit or debit card (which is required when buying it online): cash or in-store credit, which customers can accrue from selling games to the retailer, work just as well. About 70 percent of GameStop’s digital sales come from non-credit card transactions. 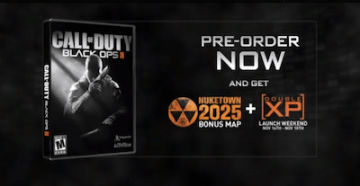 Its database of PowerUp Rewards members also allows the company to notify customers on the latest pieces of DLC. Using the recent release of Call of Duty: Black Ops II as an example, Schliesser said GameStop can look at those who reserved the game at its stores and specifically message them about DLC they might be interested in, such as the $50 “season pass” that includes four upcoming map packs for the multiplayer-centric first-person shooter.

“When we first started [selling downloadable content] in 2010, we had less than a 2 percent attach rate for DLC to a physical game,” said Schliesser, indicating the number of people buying DLC at the same time as the physical disc. “That started changing in holiday 2011, and what changed is publishers decided to start marketing digital content to customers when the game released rather than waiting three, six, or 12 months afterward.

“We kind of knew at that point that this is the right formula: You have to have a really good game, a game that has a history of good content, and you have to market it at launch. It also helps to have a sales person because that’s one thing that a digital platform [like the Xbox Live Marketplace or the PlayStation Store] really can’t do. You can’t have a customized interaction with someone who knows you and what your gaming habits are.”

While having DLC ready for launch is good for both publishers and GameStop, it’s still a point of contention for many gamers who feel like the extra content should have been a part of their $60 purchase. Ironically, one of the more controversial pieces of day-one DLC from earlier this year — a pack for role-playing game Mass Effect 3, which featured a brand new playable character — has the highest DLC-to-disc attach rate for GameStop: 50 percent of people who bought the regular edition of the game at launch also paid for the $10 DLC within the same transaction.

If you spent the extra cash for the collector’s edition of Mass Effect 3, however, the DLC was already included. Schliesser was aware of the “blowback” from the community but thought the way publisher Electronic Arts and developer BioWare  handled it was “perfectly valid.”

He added, “The most important thing that we found is the associates in the store drive the business. They understand what content is. It’s easy for them to sell content to a customer when that customer is buying a copy of the game. DLC for us attaches better to a physical game than any other accessory or add-on that we have in our company — whether it’s a headset, a controller, or strategy guide — because it’s so easy for the consumer to understand what it is they’re getting. From very early on, we understood that we had to do a good job of not only educating the consumer but also educating the person behind the counter.”

Educating the consumer about downloadable content is a wise move for the world’s largest game retailer. GameStop’s digital sales, which include DLC, were up 31.8 percent to $127 million during the third quarter of its fiscal year.