Games are not like cars or smartphones. The quality of the experience doesn’t really diminish if a PlayStation 4 disc had a previous owner. That’s why retail giant GameStop has such a significant second-hand software business, and it’s why a startup based in Jerusalem is looking to get in on the action.

GameLock is a new online store that wants to change the way you think about trading in games. Its major goal is to simplify the entire process of buying a new release, finishing it, and trading it in. Right now, players have no idea how much they’ll get back when they trade that game in a month or two down the road to a store (you can call GameStop today for a price, but it could change tomorrow). GameLock plans to shift that by giving consumers all of the information up front. GameStop alone made $1.7 billion from used games in 2013, and it dominates that market. GameLock seeks to capture some of that market by offering up a compelling alternative while also potentially throwing a few dollars to publishers as well.

When you load up GameLock’s website, you’ll see a clean-looking online store featuring all of the biggest new releases and more. Shoppers will also see that each product has a steep discount.

On the beta-test site (which features only placeholder prices), its store has the Wii U Zelda action game Hyrule Warriors on sale with the $60 price crossed out. Instead, GameLock’s price for Hyrule Warriors is only $22.32. This is how you get that price: You buy it, and GameLock will put a hold of $60 on your credit card. If you then trade-in Hyrule Warriors before 30 days after your purchase date (the company gives you a pre-paid envelope to send it back in), the site will only charge you $22.32 for the game. Of course, you don’t have to trade it in at all — the game is yours to keep if you choose. 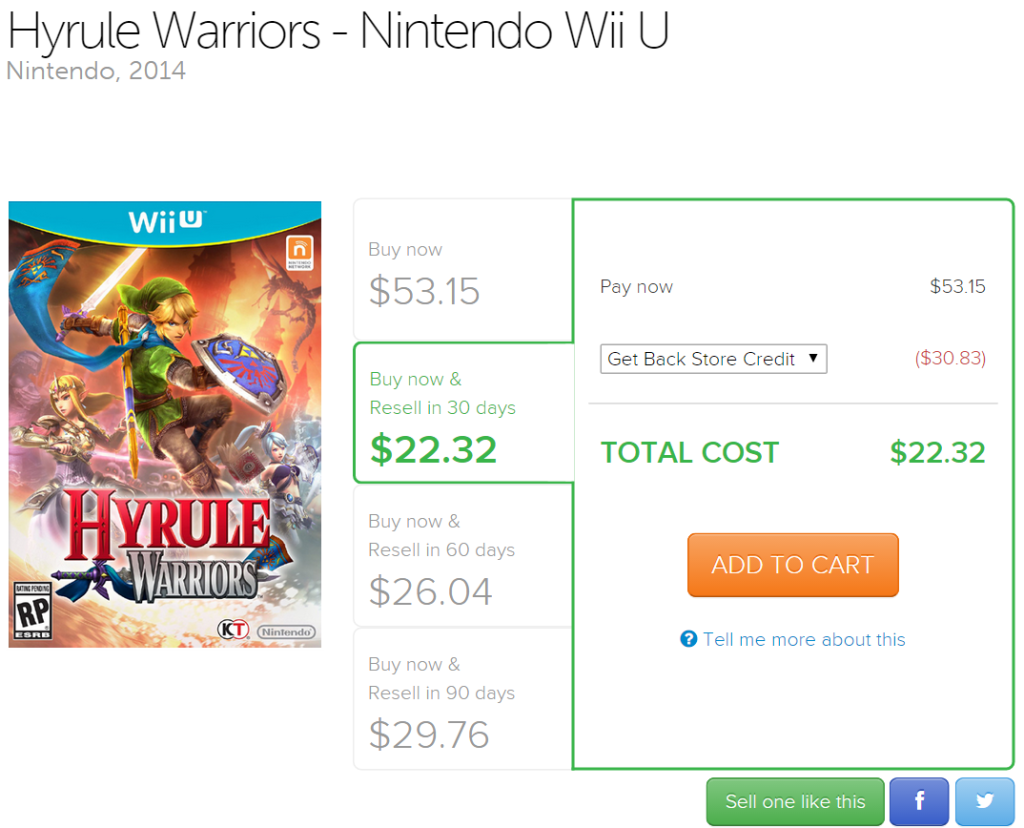 Above: No more trying to do fuzzy trade-in math in your head. GameLock gives you all of the info when you buy the game.

Essentially, GameLock bundles in the trade-in value into your initial transaction. If you trade it in between 31 days and 60 days, you’ll get the game for $26.04. Trade Hyrule Warriors in between 61 days and 90 days after your purchase, and you’ll pay a total of $29.76. If you keep it beyond the first three months, GameLock will simply clear the $60 hold on your card.

Those prices will change depending on the product, but the site will always tell you upfront what you’ll end up paying depending on how long you keep each disc. That is the core of GameLock.

“I’m one of those original eBay power sellers from back in the early 2000s,” said Altschuler. “I’ve been selling on the Internet for 15 years. I know all the pain points. I’ve always been conscious of that disconnect between the purchase and the resale. We had the idea to put them together and lower the cost of acquisition. Let’s eliminate the hassle and effort and uncertainty in reselling. That’ll encourage people to buy more. We’ll have this healthy resale market that encourages the primary market.”

Altschuler explained that certainty is where GameLock really differs from a retailer like GameStop. You never know how much you’re going to get when you resell a game back to that retailer, and he believes that not knowing keeps a lot of people from even engaging in the second-hand market.

“If you come back to GameStop, you really don’t know,” GameLock marketing director Yehuda Goldberg told GamesBeat. “They might have a thousand of these discs that came back and they can’t take yours. You’re stuck with it.”

This is a model that market-researcher Lewis Ward of IDC thinks has some potential.

“Assuming that players are getting a significantly higher return value [on their games], I could see gamers who are seeing a percentage increase in trade-in value choosing to go that channel than taking it back to GameStop,” Ward told GamesBeat.

Cutting publishers in on the deal

GameLock isn’t just looking to create a better deal for consumers. The company mentioned that it is also looking to give publishers a percentage of each resale.

“That’s something that we’re willing to discuss individually with each publisher,” said Altschuler. “It’s not set in stone.”

What the company would say is that giving publishers and developers some money for each resale wouldn’t raise the final price for consumers.

“Right now, GameStop is making a 50 percent profit margin,” said Goldberg. “You’ll buy a $60 game that they’ll sell pre-owned for $55 and they’ll take a $20 or $30 store credit for. The consumers know they’re getting screwed, and they hate it. But it’s their only option. I’m sure that the publishers know as well. Companies are getting zero out of resales. Publishers spend millions of dollars promoting a game, and then on day one you have this secondhand game that competes on the same shelf. There’s no marketing money that went into it. GameStop’s taking the whole pie and not sharing.”

Physical games in a digital world

GameLock right now is focused on physical games. That might seem like it is backward thinking with the rise of digital downloads, but Altschuler and Goldberg are quick to note that the vast majority of gaming is still done on traditional disc-based mediums.

“From the numbers I’ve seen, there’s more than 3 billion discs floating around America, and hundreds of millions of consoles out there,” said Altschuler. “Not everyone ran out to buy a new Xbox One or a new PlayStation 4. Lots of people still have the previous consoles. The standard Xbox 360 has a four-gig hard drive. You can’t even download many games to it.”

Still, discs are not the future.

“The whole market is moving toward digital,” said Ward. “The long-term prospects for RedBox or trade-ins will see declines. GameLock is getting into a market that is over its peak as far as I can tell.”

And that’s exactly why GameLock is not tying its fate to DVD and Blu-ray. The company already has plans to shift its business model to downloadable software — although it isn’t quite ready to go into details.

“Digital is part of the plan,” said Altschuler. “It would just be premature to speak about it. Right now we’re launching with discs, but digital is a technological possibility.”

The CEO did give us a glimpse at how reselling digital downloads might work.

Altschuler went on to explain that the company would potentially try to partner with Steam or directly with publishers.

“Knowing that when you buy something through us digitally, you have that resale opportunity, that would be a differentiation point,” said Altschuler. “But again, we don’t want to jump the gun and misspeak. It’s too early.”

While we may not have the whole story on how this will work, Ward finds it difficult to imagine publishers welcoming used-game sales on digital platforms. He imagines that they will want to stick with big sales rather than trying to apply a physical model to an online medium.

Today, no other companies are reselling digital games.

Finally, while Altschuler is completely dedicated to building this business model for games, he does acknowledge that he could expand into other categories.

“We know for a fact that there’s other markets beyond gaming where the technology works,” said Goldberg. “The grand vision is that this applies to other products.”

The company may even offer up its tech for other retailers. In that future, GameLock would either offer up its software as a plug-in, or it would come in and build the system for each store.

“We can do a co-branded site or we could plug ourselves right into their shopping cart,” said Goldberg. “We could do a hosted, managed, white-label system where nobody else knows [that we are running the shop].”

But that’s the future. For the present, GameLock is completely focused on making this work for gamers.

“They’re educated already,” said Altschuler. “This is why it’s our go-to market. They know their product. They know what it’s worth on the secondary market. We don’t have to teach them about buying and reselling. It’s something they already do.”