Greer: The key to democratization in the game industry in the last 15 years has been the creation of tools, professional tools like Unity and AWS, that make it possible for very small teams, anywhere in the world, to teach themselves how to make games and then go and make them. As a publisher, we work with a lot of very small teams that make games. Sometimes as small as one or two people, who are making games that we take to the mobile app stores and see 10 million or 15 million installs.

AdVenture Capitalist is one example. It was made by one person in 30 days as an experiment, a learning process, and now it’s a multi-year success. That’s a tremendous democratization force. It doesn’t matter that Electronic Arts has some amazing engine they work with, or Epic or anyone else. It’s allowed games to be made by anybody, anywhere in the world.

The enormous counter to that is that with so many games coming out, it’s difficult for any one game to get attention. It used to be difficult to get on store shelves at GameStop. Now it’s difficult to get the attention you need on the app stores, on Steam and so on. What we’re finding is that the anti-democratization force is the need for advertising to reach any kind of scale. Advertising needs a big budget. Very small teams can make games, but it takes a very large budget to get those games in front of people. That’s a counterforce in the industry.

We have new phenomena like YouTubers and Twitch streamers who can discover some amazing new game and start talking about it. That’s another democratization, in advertising and promoting games. But it’s often out of your control. Maybe you get attention and maybe you don’t. It’s frustrating for a lot of creators to have so many things still out of their control.

Soqui: I don’t think the goal of democratization is always scale, though. We talked about Roblox recently. The person who made that was just doing something for himself and his friends. It just happened to take off. Sometimes the goal behind democratization is just satisfying a need that happens to be unmet, not because you’re trying to get to a major scale. Bigger companies will look at those ideas and find out what might work as far as taking them to scale. It’s a continuum, a segmentation model, as opposed to just one person takes all.

Levin: As a capitalist I would say we’re trying to get to a place of viability. It’s great that you see these one-off stories of one or two people who created a curiosity and it took off. But there’s a bunch of different third-party publishing models that are developing and evolving. You’re dealing with massive markets that have been untapped, that monetize differently than other markets. I’ll focus on India again. Their in-game monetization behavior does not mirror that of the west or that of China. That’s going to evolve into its own thing. Looking at game mechanics, you have games that have risen so far above the norm, like Fortnite, that pale in comparison to the marketing budgets of some of the biggest publishers in the world.

GamesBeat: An interesting factor there is that the battle royale genre didn’t arise from a budget like Call of Duty or Battlefield. It was essentially one guy.

Levin: You look at that, maybe it’s because of the nimble nature of that company. They have a platform play as well, similar to Unity. You have all these mutually aligned interests, and that’s helping to create these new relationships between bigger players and smaller players, where their interests are financially aligned.

I’ve written about game studios in Siberia. Supercell is in Helsinki. They’ve democratized jobs in the game industry in a huge way. They’re now spread across many nations. Jobs can be created in almost any country now. Eventually, a centralizing force comes along, and sometimes it ties all those things together. In particular, I’m thinking of the largest game company in the world, which is Tencent. Tencent owns a piece of Activision and a piece of Epic Games. It owns Riot and Supercell. It has a huge business in China. But it’s always been investing as a minority. It hasn’t taken over and consolidated as many businesses. It’s an interesting tug of war in itself, between centralization and decentralization.

The outlook for games is very positive in a lot of ways. Many forces are pushing and pulling it in different directions, but it seems like the outcome can only be good. Do you have any closing comments along those lines?

Soqui: Sometimes we ask questions like, how big is the gaming market? How many people are playing games, and in what demographics? Everyone’s a gamer. Whether you’ve played cards or board games, it just goes from there through more and more that’s been enabled now online, in digital media, in content creation, everything we’ve talked about today. If you ask yourself, “Am I a gamer?” Yes, you are. Everyone is already a gamer. It’s how we interact with each other, how we socialize, how we compete in ways that are fun. It’s just being taken to another level.

Remember that. Gaming is not a new phenomenon. It’s just exploding across all these different boundaries. The reach and the way it pulls people together is something that hasn’t happened before.

Chimowitz: There’s a new platform called Kahoot that allows anyone to make a game, to make a quiz game. Educators are using that to teach kids math and science. You can use it as tool for testing and training new hires in an easy way. Gaming is everywhere — in education, in the workplace, at home.

Greer: The thing to keep in mind is how many hours per day people spend playing games, in terms of — if you look at the engagement with games, so many of them have not just hundreds of thousands, but millions or tens of millions of daily players putting in an hour or two or three. It’s shaping the world we live in in a very meaningful way.

Levin: It’s also pulling in — look at how much has been said about teenagers. “How do you parent through Fortnite?” You can’t turn on anything these days and not have someone trying to educate you about how to literally parent through gaming. But there’s also been a lot of upside and positivity that’s been discussed around it from those who study sociological dynamics. A lot of kids are pulling from multiple constituencies in their lives that they never would have put in a room together. They’re cooperating in a way that they never have before.

Yes, it is rife with all the things that transpire in any online environment with social dynamics in and around it. You throw in anonymity and then you really get the cowards to rear their heads. But with that being said, folks are working toward a lot of transparency. The great thing is, to your point about the metrics of consumption, that cannot be ignored. The price points of game products cannot be ignored. The sheer scale of the industry versus other forms of media cannot be ignored. Everything is tracking in the right direction. 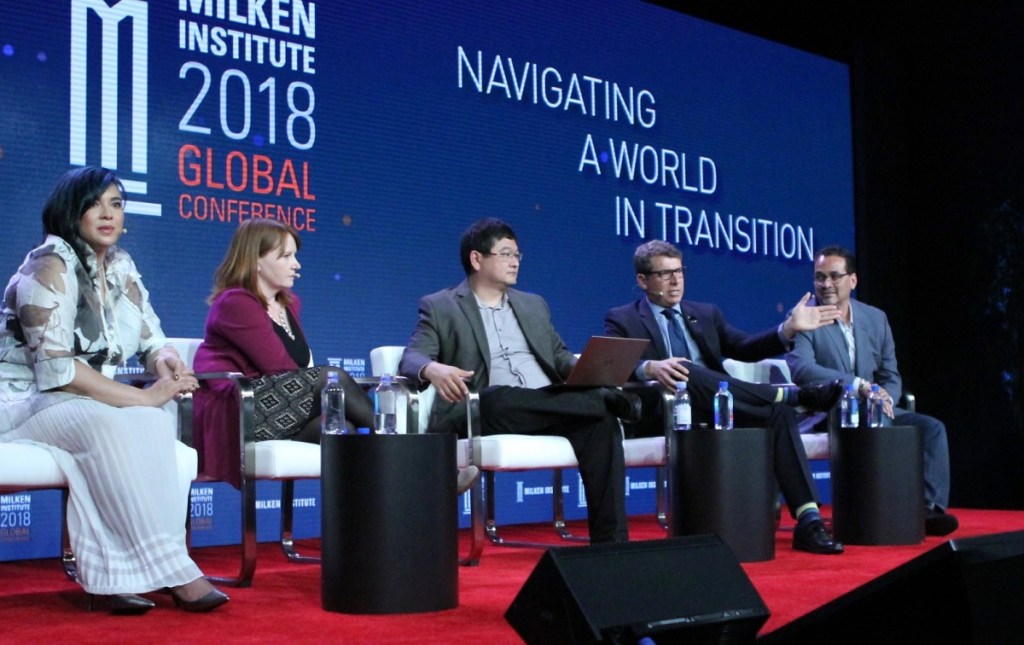 Above: Left to right: Kathee Chimowitz of BoomBit Games, Emily Greer of Kongregate, Dean Takahashi of VentureBeat, Peter Levin of Lionsgate, and Frank Soqui of Intel.

Audience: I have a small telecom license in India, and what I’ve found there is that the younger people, compared to people my age, are now beginning to explore the game industry. I’ve also visited several countries in Africa, and I’m trying to find out how we can bring this business on to a continent where it can give young people a new source of entertainment, compared to legacy media.

Levin: I can tell you, in the two big markets, Middle East and North Africa, there hasn’t been a strategic conversation we’ve had in the game space where that is not a focus. I do think it speaks to one of these untapped markets. It feels as if there’s a tremendous appetite. I know Saudi, for example, punches way above their weight for Overwatch consumption. It’s a crazy number.

GamesBeat: There’s a new VC firm called Altered Ventures whose mission is to invest in emerging markets and game projects. That’s one encouraging sign. Another is, to have good game developers and a good game industry in your country, you need gamers. That’s where you start, creating a nation of gamers. Good games follow.

Audience: Last year, Metacritic released a list of top game publishers. Of the five most successful last year, none of them had a new IP. Can you talk about existing IP and using that to cut through the market, versus independent darlings who are releasing new IP?

Levin: Half of me wants to say it’s great that they don’t need new IP. It’s no longer about shrink wrap and shelf life, where your game has six weeks on the shelf and then they throw it in the discount bin. That model has completely changed. All that friction no longer exists. That’s a really positive thing. The flip side is that new IP get introduced all the time. We didn’t know what Fortnite was three months ago, or most folks didn’t. You can read data that probably makes a case either way, but stepping back, there’s a solution.

Soqui: It sounds like you may be referring to IP in the context of an application. My IP is my name. But there are different kinds of IP within that IP that invites audience participation or viewership. There’s IP that exists in the silicon layer. There may not be brand new games on the horizon, but don’t discount the indie developers out there. They’re helping expand the market, and the guys that don’t have new IP are watching.

Greer: It takes a while for something to grow into a top IP, too. Sometimes it happens in a month, but often it can happen over a year or more, a slower build. Today’s new IP is next year’s top five franchise, or two years from now. That speaks to that depth of engagement, the length of time people spend playing games and how that can build slowly over time.