Ninja may have just missed out on being the top gaming influencer in July, but the popular Fortnite streamer was right back aboard the Battle Bus in August. As Fortnite’s player base continues to grow with game releases on iOS and Android, it’s no wonder the star continues to gain a larger following from dedicated new and old fans.

GamesBeat has partnered with social video analytics company Tubular Labs to bring you a monthly chart looking at the top gaming influencers and sponsored influencer videos each month. Tubular Labs measures video content published by public channels/pages from major social video platforms. Performance metrics like views and engagements reflect the respective platforms’ definitions of them. Sponsored video is a proprietary metric and derived by Tubular using principles defined by the industry.\ 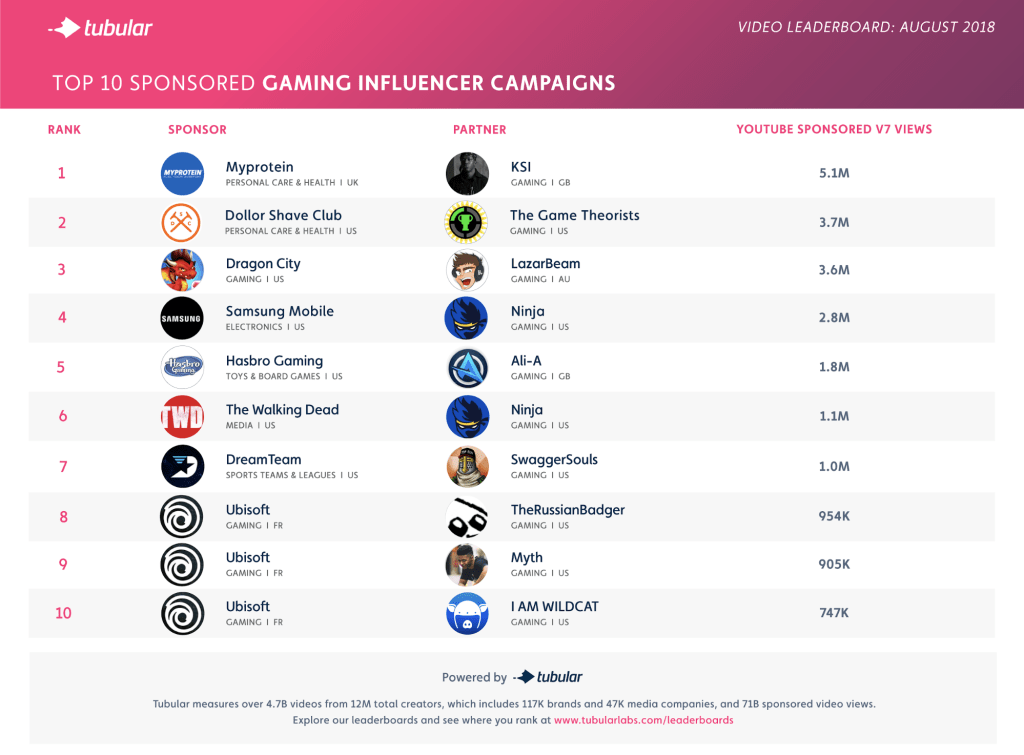 In August, it was Ninja claiming the top spot among gaming influencers across all social video platforms, with over 371 million total views — the largest portion of those coming from YouTube (182 million). Ninja had finished second in July, but strong YouTube growth in the month of August guided him to the No. 1 ranking this time around.

Influencer marketing has exploded in recent years, and gaming-specific influencers are no exception. With hundreds of thousands of dollars in potential monthly income at stake, it’s become big business for the best of the best gaming creators to make a living on streaming video platforms.

On the month, 14 different new videos accumulated 5 million or more views, led by “Tilted Towers: EPIC 31 Frag Game” with 9.1 million. “EXCLUSIVE GALAXY SKIN REVEAL!!” and “*NEW* Heavy Sniper Rifle!” were the other videos to top 8 million views apiece. As always, Ninja’s Fortnite content resonated primarily with males in the 13-34 age range. According to Tubular, nearly 75 percent of all Ninja viewers came from that group.

Ninja’s rise coincided with a one-spot drop for July leader FGTeeV — a mother, father, and their kids going by the “Family Gaming Team” name. The channel’s views actually dipped slightly from July to August (from 371 million on YouTube to 355 million), which accounts for the slight step back. That didn’t stop subscriber growth for FGTeeV, however. The channel gained another 400,000 new YouTube subscribers (up to 7.8 million now) over the course of the month.

The top 10’s biggest gainer this month was Lachlan, moving from 12th in July to sixth in August. Lachlan’s leap was propelled by 800,000 new subscribers on YouTube and a 24 million-view boost on the channel, month-over-month. All of Lachlan’s most popular new videos in August were about Fortnite (the channel does focus on other games here and there, too), led by “The *RANDOM* SKIN CHALLENGE” with 12.9 million views. Lachlan’s growth has more than doubled since June of this year as the channel focuses more heavily on Fortnite content.

JuegaGerman was the other newcomer to the top 10 in August, moving up five spots to ninth overall. The Spanish-language channel only utilizes YouTube, and has grown modestly in recent months. While it utilizes gaming culture as a subject matter, it also touches on broader pop culture and internet memes. 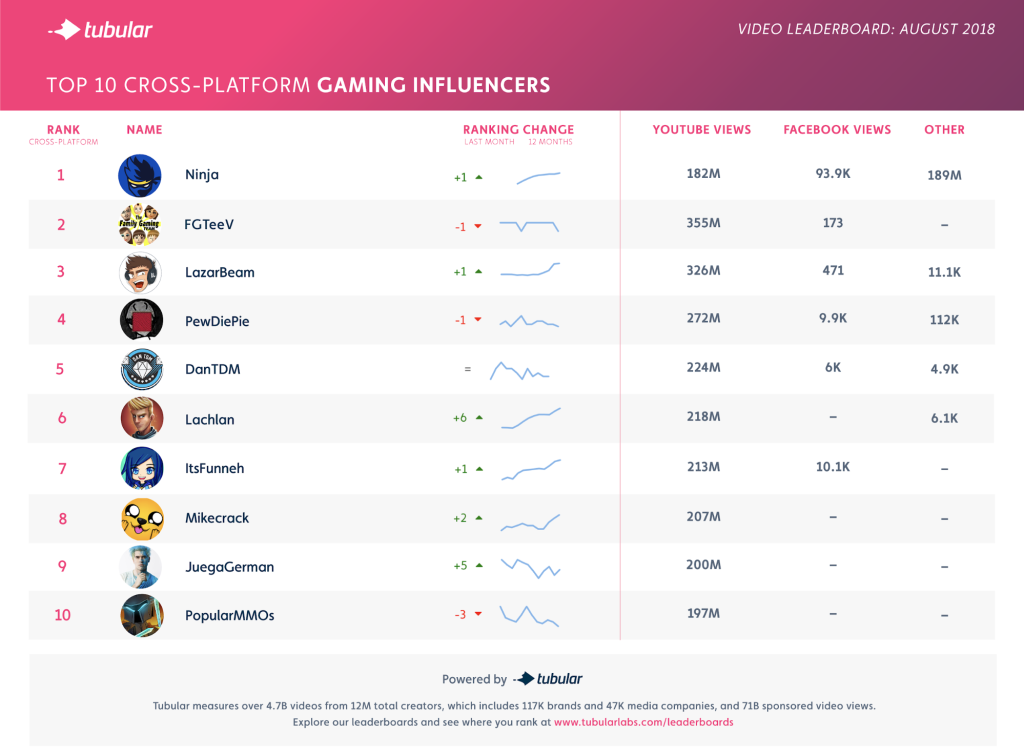 Switching gears to how these influencer channels monetize their gaming content, we look at the most popular sponsored YouTube campaigns in August, sorted by Tubular’s V7 metric (views within the first seven days of publishing).

KSI’s campaign with health supplement company Myprotein earned a V7 metric of 5.1 million videos, to lead all sponsored campaigns. Myprotein was behind his loan sponsored video of the month: Showing him completing boxing training before fighting fellow internet celebrity Logan Paul. The Game Theorists, which had last month’s top campaign, finished second in August with a sponsored video from Dollar Shave Club around Fortnite.

Given how popular Ninja’s channels always prove to be (and were in August, since his was the top gaming influencer channel in terms of views), it’s no surprise that two of his campaigns ranked among the top sponsored videos, too. His campaigns with Samsung (V7 of 2.8 million) and The Walking Dead (1.1 million) ranked fourth and sixth, respectively.