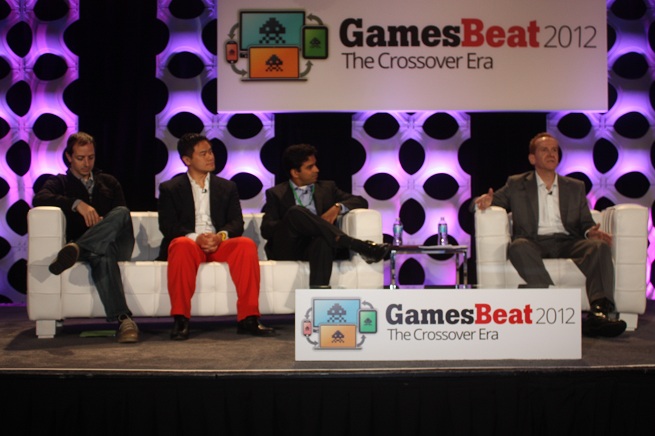 Anticipating an explosion in mobile gaming in the next five years, investors say they are placing bets on what they see as the underserved market for iPad and tablet games.

“People say tablets have been overhyped…but I say they haven’t been hyped enough,” said Spark Capital venture partner Nabeel Hyatt (pictured far left). He joined analysts and other VCs from the gaming industry to discuss the future of mobile and social gaming at VentureBeat’s MobileBeat and GamesBeat conferences today.

Currently, Jeremy Liew (pictured with red pants), managing director at Lightspeed Venture Partners, explained, the vast majority of iPad games are nothing more than upgraded iPhone games. He referred to the tablet as the TV of the next 10 years and predicted that games would be the major channel.

Liew laid out a few competitive advantages to developing a game specifically for a tablet device, rather than as an adjunct to a smartphone. Tablets are more of a collaborative playing device, and most important, customer acquisition is easier as the market is less saturated.

“Developing for tablets is a relatively simple solution to the discovery problem,” Liew said. “There are simply fewer games.”

Atul Bagga (pictured on couch, right), a senior equity research analyst for Lazard Capital Markets, chimed in. “The tablet will become the quasi-console, quasi-controller of this generation,” he said.

Bagga said the current offerings for the iPad and other tablets are just scratching the surface and within the decade, tablets will far outstrip sales for desktop PCs. This year, Apple released statistics that the global demand for the iPad has already exceeded the market for HP, Lenovo, and Dell PCs.

The parting feedback for young game developers? It’s not enough to make a cool game and expect users to discover it organically. “You must have a solid distribution and discovery strategy,” advised Liew.