The fattest cats have to go where the fattest money is.

Garfield, who debuted in newspaper comics back in 1978, is nearly as old as gaming itself. He even starred in software back in the old Atari era of the early 1980s. But these days, the orange Monday-hater has taken his digital game to mobile with titles like the recent Garfield: Survival of the Fattest. This makes sense, since the mobile market’s revenues could exceed the console industry’s this year with $30 billion, according to market researcher Newzoo.

We sat down with Garfield creator Jim Davis and David Reddick, who works at Davis’ Paws Inc. as a cartoonist and its digital/social media coordinator. We talked about the new game and Davis’s involvement with it, along with the exodus of media properties from home consoles like Sony’s PlayStation to mobile.

GamesBeat: Your background is in cartooning, not gaming. How involved are you in projects like Survival of the Fattest?

Davis: Actually, I work with the concept for all the games. David and I brainstorm around: What if he goes this direction, does this, doesn’t do that? Things like that. David carries the heavy load on this stuff, but I am aware of it. I’m aware of the storyline. I know the appeals and occasionally go in, dip my toe in the games, and do a little bit of — I’m nowhere near the expertise of a lot of early adopting 8 year olds, obviously. But nevertheless, it’s fun to see. 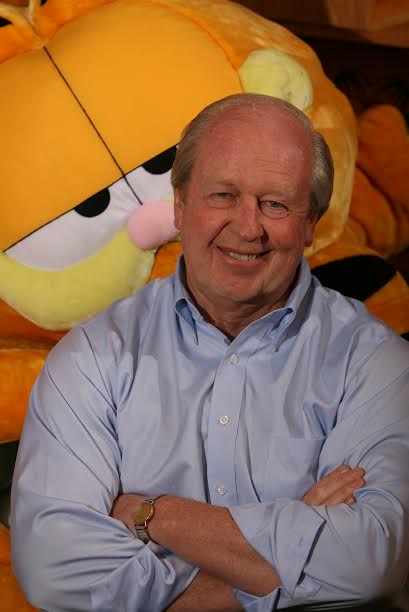 Above: Jim Davis created Garfield in 1978.

GamesBeat: Do you play any games?

Davis: I’ve played a lot of your Freecell kinds of games online, as far as — it’s been a long — well, I’ll tell you. RPG games like Zelda. I got into that. And then the demands of the strip and the TV and the movies and everything became so strong that I had to consciously step away from it, as much as I loved video games and things like that. Just to simply preserve my time for the projects we have going on here. When I get into a game, I always have somebody along to help steer.

GamesBeat: It’s interesting. Garfield has had a really long history with video games. He had games out on the Atari back in the day. I remember a Sega Genesis game when I was a little kid.

Davis: Oh my gosh, yeah. Yeah, we actually made a trip and went over and visited Konami in Japan one time, playing around with the games and what they would do in the early days. With the original Atari consoles and stuff, we had an absolute ball with those programs.

GamesBeat: Do you think games are a part of keeping the character relevant through the years? Especially with a younger audience?

Davis: I always like to push Garfield in directions where he resonates with the young readers. I relied for years on just the comic strip. Garfield’s fanbase starts around age 6, when people start to learn to read. When CBS came to us and wanted to do an animated series, at that time — now we’re talking the mid-1980s — that’s when he really started reaching a younger demographic. But as they moved away, we started looking for a new direction.

It was nearly 20 years ago when we started looking at the Internet. Fifteen years ago, when we got actively involved with it, we were looking to see where kids were going. They’re very fickle. They move very quickly. You have to pay a lot of attention. We were online very early as a result, because we knew we were headed there.

Quite frankly, too, I saw that newspapers, our traditional publishing method, were having some issues. Anything on paper. Kids were growing up more comfortable staring at a video screen than they were sitting in front of a book or a newspaper. We knew we had to digitize. We had to move an analog cat into a digital world.

Fortunately, today putting the comic strip online has been very well received. I believe we have a funny mood today, in that kids expect to see comics online look like the comics from the newspaper. At least today, comics still read the same and play the same. As a result, we’ve been able to maintain a younger demographic.

I think there’s also some retro appeal for their parents, who grew up with Garfield in the ’80s. They have a certain affinity for the character, and they’ve introduced it to their kids as well. Garfield’s a cartoon. He’s graphic. He’s colorful. As a result, he’s perfect for gaming. There’s that emotional tag, too, with kids having known him from the comic strips. They don’t just recognize the cartoon cat, but he also carries that history of gluttony and physical humor and an attitude right through to the game.

GamesBeat: He seems like kind of a timeless character in the strip itself. The premise is pretty simple. This guy owns a cat and a dog, and that translates from the late 1970s all the way up until now.

Davis: It is classic. We had to create conflict. In fact, in creating the characters — Jon is easygoing. Garfield’s not so easygoing. Jon’s an optimist. Garfield’s a pessimist. It’s only when you have conflict and contrast that you really have humor, or an ability to tell a story that’s compelling. Same thing with this game. Garfield thinks he’s going on a vacation when really Jon is sending him to a place where he can get healthier. Now you have the conflict and it lets the story begin. 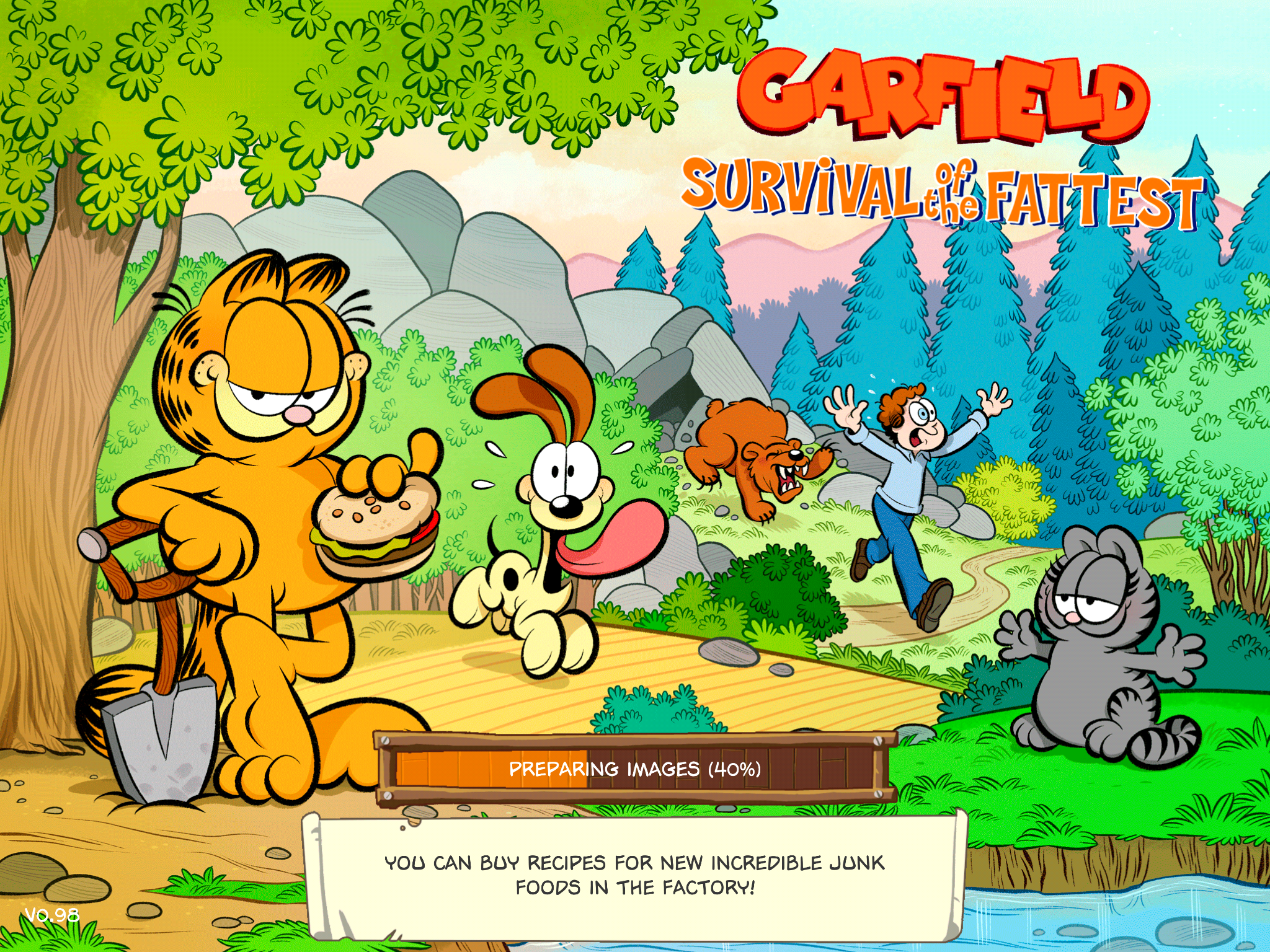 Above: Does anyone notice Jon’s about to get mauled to death?

GamesBeat: Is this an original idea, or was it based on any comics?

Davis: We did it in animation before. We sent him to obedience school, which never works out well. But no, we’ve never taken him to a health farm, any healthy kind of place like that, with a diet and stuff. We’ve tried to make him better behaved and things like that, but never quite in this direction. This is new.

GamesBeat: How did developer Pixowl get involved with the game, get the chance to develop it?

Davis: We’ve been working with Pixowl for a long time. It’s been about three years.

David Reddick: They contacted us and were interested in developing a game for Garfield. They approached Jim and met with us. Jim started planting the seeds, as it were, for what the game would be about.

Davis: There was the farm idea, in the very beginning. It was very Farmville-esque. I loved the idea of that setting. For kids, learning about how you have to water in order to grow the plants, grow the trees, and then you have to harvest it — that whole process is really a nice lesson.

GamesBeat: How much freedom does Pixowl have with the license? It sounds like you guys bring ideas to them a bit, and then they develop them.

Davis: They have a lot of freedom, actually. We just have some very basic restrictions on things — keep it family-friendly, no alcohol or guns, stuff like that. Short of that — obviously we allow nudity in Garfield. [Laughs] But no, we actually like to give the licensees a lot of freedom. They can push the envelope and we’ll be the conscience. If we have the type of relationship where we have to hold them back, usually we get a lot more than we would have anticipated. That’s always a good thing.

GamesBeat: So we won’t be seeing Garfield in Grand Theft Auto any time soon.

GamesBeat: Sure, that idea markets itself. But the character is really malleable. When I was a kid, I remember a series of books where he and his friends were superheroes. It sounds ridiculous, but I read all of them.

Davis: We actually made a direct-to-video movie with the Pet Force characters. It was originally published by Scholastic, and we absolutely fell in love with that series. Every now and then, when I get a chance, I like to use those characters. Four or five years ago, we put out a video. I produced it and had great fun with it. It had a theatrical release in a few markets, like Brazil and France. It was a lot of fun. Above: You can tell it’s a mobile game because it’s isometric.

GamesBeat: I know this isn’t Garfield’s first mobile game. How successful have previous mobile games been?

Reddick: They’ve had good success. Garfield’s Diner has been incredibly successful for us, with several million downloads. Garfield’s games, mobile game things, have been very successful. Things have gone very well. They’re very well received. Garfield Kart is so successful as a mobile game that it’s actually being developed into a Nintendo 3DS game in various markets around the world. Gamers really respond to Garfield being Garfield, even some of the fantastical types of things that might happen in a game.

Davis: It’s fun for them to work with a character they know. It’s like having a friend show up in a game. “Oh, if you do this, he does that.” Some of what’s been done — it’s not like having to be introduced to a brand new character and then dealing with new gameplay.

GamesBeat: It seems like a lot of properties like Garfield have gone away from consoles and handhelds and into the mobile space. Why do you think that is?

Davis: It’s where everybody’s heading. We go where the eyeballs are. More and more every day — last night I got home and my 4-year-old grandson’s flat on the floor with his phone. It’s been interesting watching the time he spends on the iPad. More and more, he’s going to the phone, because it’s just so easy to carry around.

GamesBeat: I’m sure Garfield would like it. I remember a comic where he screwed a TV to the ceiling so he could watch it in bed. Now he can just have his iPad there.

Davis: Yeah. It’s so much simpler these days.

GamesBeat: So much easier to be lazy.

Reddick: He had the mobile concept down a long time ago.