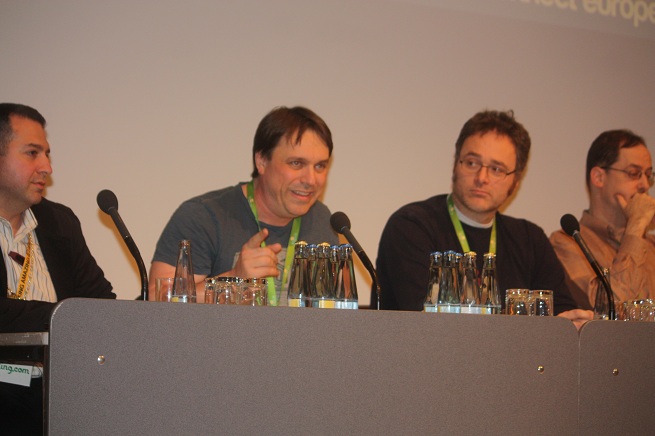 HAMBURG, Germany — Chris Taylor realizes just how hard it is to raise money now, especially on fickle consumer-driven crowdfunding platforms like Kickstarter. The chief executive of struggling Gas Powered Games pulled down his Kickstarter campaign today for his Wildman game as it was failing to get a critical mass of support.

Speaking at the Casual Connect Europe event in Hamburg, Germany, Taylor acknowledged that the pitch for an original game set in caveman times just didn’t resonate enough with gamers. Cryptically, Taylor said that he was pursuing other opportunities for keeping Gas Powered Games, which laid off the bulk of its staff last month, alive. 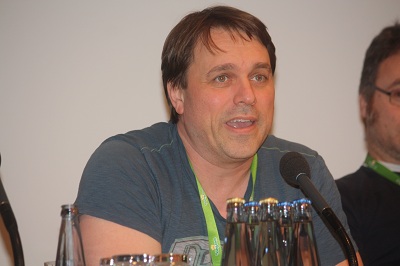 “I’ve run Gas Powered Games for 15 years,” he said. “I have learned the hard way that being a CEO and a game designer is not an easy thing to do.”

Taylor said that bootstrapping is the way to go, raising funds from people you know. But he definitely believes game developers should get experience working for someone else before doing something on their own.

Always the joker, Taylor said, “I’m jet-lagged. If you’re thinking, ‘Jeepers, Taylor, you’re the slowest, dumbest guy on the panel,’ I just told you why.”

Eric Goldberg, the managing director of Crossover Technologies, said Kickstarter started out with a boom in game crowdfunding last year, but now it’s getting harder to raise money on. Consumers are becoming more discriminating in their tastes and aren’t funding every single major Kickstarter anymore.

Taylor didn’t lowball his budget in setting a $1.1 million goal. But others have tried to raise a smaller amount of money than they needed to finish a game — just so the campaign would go over well. But Taylor said it was clear his campaign would fall short.

As to why it failed, Taylor said the campaign ran into fatigue among consumers.

“People had spent a lot of money on other Kickstarters and were waiting for those games to arrive,” he said. “We also started just after Christmas, when people had already spent money.”

“I don’t know if you know my career,” he said. “I’m a little bit of nut. I didn’t want to do a nostalgia game or remake. I focused on an original idea. It wasn’t a copycat. But it didn’t work.”

When you ask for $1.1 million, Taylor said, people are more cautious.

“I’m a little more on the cynical side,” he said. “Kickstarter is starting to wear itself out. It’s a numbers game. Someone has lightning in a bottle. This business is really, really tough. It’s turning into a lottery business, unless you work 12 hours a day, seven days a week, and study gaming for decades.

“Now, it’s tough. It’s like going to Hollywood and saying I want to make films. You have to compete with James Cameron. I’m leaning toward there is no free lunch” when it comes to raising money for games.

Today’s environment for game development, Taylor laments, just isn’t what it used to be.

“There was a heyday in the 1990s where you could burst in the door of a publisher and you could get a contract. You blew your budget anyway, and they dealt with it,” Taylor said. “That has locked itself so tight. Consoles are going to just hit the wall. The guys who wrote these big checks — that’s just gone.”

In closing, Taylor said, “I have almost been driven out of business. I am still in business. I know everyone in the industry. They didn’t help me. It’s about whether you have a blockbuster that can ship 10 million units.”

Goldberg said, “Chris tried to do something original. The windmill won this particular round and I hope you will do this again and succeed.

Disclosure: The conference organizers paid for my trip to the event. Our coverage of it remains objective.