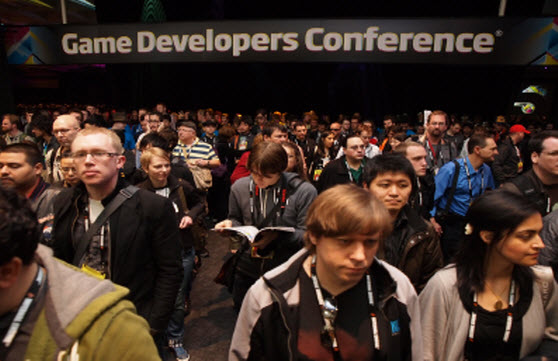 Just about every new developer these days is an indie. And his interest is in making mobile games, not console games.

Those trends are underscored in the first annual survey of 2,500 North American attendees of the Game Developers Conference (GDC), which takes place in San Francisco from March 25 to March 29. The survey paints a picture of the games business as it stands during one of the most tumultuous times in the industry’s history. It presents one of the fullest pictures of the gaming ecosystem.

“There’s a do-it-yourself movement,” said Simon Carless, the executive vice president of UBM TechWeb, the owner of the GDC, in an interview with GamesBeat. “More people are bootstrapped indies. And that’s how they’re being trained in the schools.”

Meggan Scavio, the general manager of GDC Events, said that more students are going through formal training at game design programs in colleges, and they’re shifting focus from consoles to digital platforms.

Developers are the lifeblood of any game platform, and the decisions they make can save or kill it. So it is interesting to know that the survey found that 38 percent of the developers released their last game on smartphones and tablets while 55 percent are making their current games on mobile devices. About 58 percent plan to release their next game on these platforms.

“It will be interesting to see where that is a year from now,” Carless said.

The PC and Mac are faring well. About 34 percent of developers released their last games on such computers, and 48 percent are making their current games for the platforms. About 49 percent are planning their next titles.

With the cost of console-game development rising, it’s no surprise that this activity is lower. About 13.2 percent are making games for the Xbox 360, and 14 percent plan to create their next title for the system. About 13 percent are releasing their current games for the PlayStation 3, and 12.4 percent intend to do so for their next game.

The results for Nintendo are disastrous. Only 4.6 percent of developers are making a Wii U game, and 6.4 percent plan to make their next game on the console.

The dedicated handhelds are also starving for developers. Sony’s PlayStation Vita has support from 2 percent of respondents who made their last game for the device and 4.2 percent who are making their current game for the Vita. Over 5 percent plan to release their next one on the device.

Meanwhile, 2 percent are making a Nintendo 3DS game, and 2.8 percent plan to release their next title on the handheld.

From a funding perspective, 37 percent are funded from a company’s existing war chest. About 35 percent comes from the developer’s personal funds. Only 9 percent of the respondents got their money from venture capitalists, 10 percent are publisher-funded, and 4 percent are primarily crowdfunded. About 8 percent of developers have worked on a project that was crowdfunded, and 44 percent plan to do that in the future.

And while studio layoffs are making headlines, the industry is flourishing. About 39 percent of respondents said their company’s profits were higher in 2012 than in 2011, compared with just 7 percent saying they were lower. About 44 percent of companies expanded staff in 2012, and 11.7 percent contracted.

The Game Developers Conference, produced by UBM Tech Game Network (a division of UBM Tech), is expected to draw 23,000 people, roughly the same as last year’s 22,500.