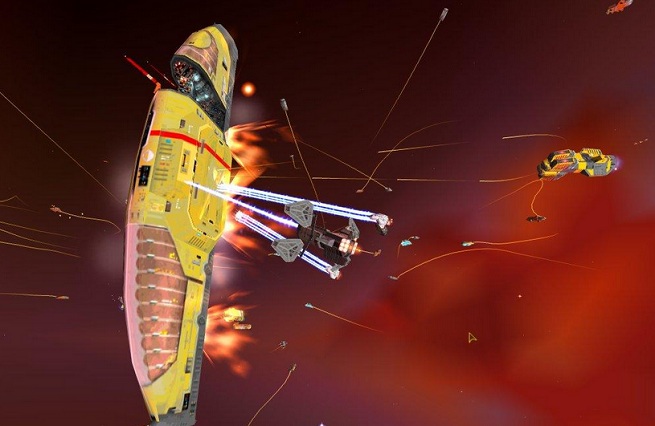 Gearbox Software has won the auction to Homeworld game license.

Bankrupt game publisher THQ auctioned off its last remaining assets in an auction on Friday. Gearbox, the maker of hit games like Borderlands 2, came out on top with the license for Homeworld, which developer Relic Entertainment created in 199. THQ acquired the rights to Homeworld when it bought Relic for $10 million in 2004.

Gearbox posted this on its online forum today: “Gearbox Software has prevailed as the highest bidder in the acquisition of the Homeworld franchise from THQ. Brian Martel, Gearbox Software’s Chief Creative Officer, has great love and respect for Relic’s brilliant, fun and innovative game and personally spearheaded the acquisition.”

TeamPixel, a startup that raised money on Kickstarter to buy the Homeworld property, announced that it couldn’t keep up with the bidding and would refund money to its Kickstarter fans.

Homeworld is a real-time space combat game where players fight huge battles with fleets of starships in a real-time 3D space. Battles in Homeworld are similar to the climatic space battle in Star Wars: Return of the Jedi.

The remaining THQ assets included in the final auction were Darksiders, Red Faction, Homeworld, MX, THQ-owned titles (including Big Beach Sports, Destroy All Humans!, Summoner, and others), and licensed software (Marvel Super Hero, Supreme Commander, and Worms). We’re still looking into who bid on those properties. Polygon reported that THQ got 17 bids. Results will be posted on this site. The auction has raised between $6 million to $7 million in its final round. Gearbox hasn’t said how much it paid for Homeworld.

THQ filed for Chapter 11 bankruptcy protection in December. In a prior auction, THQ sold three of its studios and a number of games in development. It sold off Turtle Rock Studios’ Evolve, Homefront 2, Metro: Last Light, and South Park: The Stick of Truth. The sales netted the bankrupt company more than $72 million.