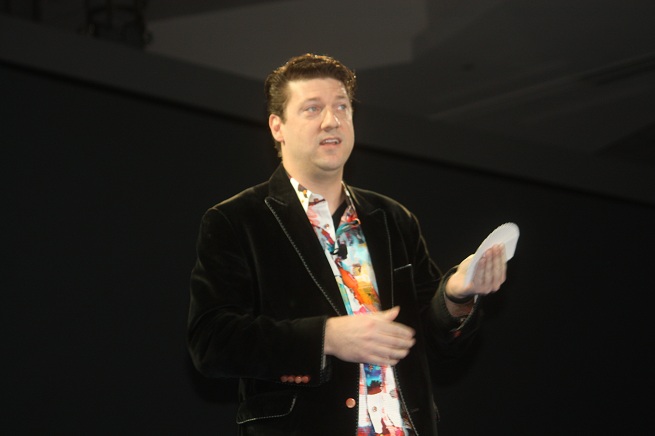 LAS VEGAS — Gearbox Software chief executive Randy Pitchford runs one of the most successful studios in video games, with hits such as Borderlands 2 dominating sales charts. But Pitchford practices magic of the literal kind. He paid his way through college as a magician and even got married in the Magic Castle magician’s theater in Hollywood.

In a talk at the DICE Summit, Pitchford tapped his background as a magician to talk about lessons for game developers. Magicians have a relationship with their audience that is similar to game developers. They invite you to trust them, Pitchford said, “Same deal [with games]. Come with me into my world, follow my line of logic, understand and follow my rules, and trust me — and there will be a payoff.”

“With magic, the impossible happens,” he said. “In a game, it is a sense of gratification. We are purveyors of pleasure. Follow me, and you will be rewarded.”

Game developers have to establish their credibility to justify why someone, in the case of console games, should pay $60 for the experience.

“We have to do this with integrity, delivering more value than we get back,” he said. “If we don’t establish credibility quickly, we will lose the audience. They might not trust us again. ”

Borderlands 2 opens with blasting music, a funny video, and then it starts. The game offers the player a “false choice.” After a first kill, you can choose between a gun that is more accurate, with a scope. Or a gun that has a faster rate of fire. It’s a false choice, because the outcome in the game is neutral. The advantages and disadvantages of the guns cancel each other out. It makes no difference. But the player gets to feel like an agent, making an important choice.

He noted that the day before, Valve’s Gabe Newell said choice makes games better than movies. But filmmaker J.J. Abrams said players screw up the choices, and the choices are fake, since most games end the same way.

“J.J.’s argument was interesting, but it’s wrong,” Pitchford said. “It does not matter the choice is real. It matters there was a choice at all. I offered a magician’s choice, a false choice,” referring to a card trick he performed on stage.

Borderlands 2 has “87 bazillion guns” to choose from, he said. But the very first choice, the one that sucks the player into the game, was a simple one and a false one.

That’s one simple lesson. Another one is that you should never give a gamer a choice in a purchase decision, where they choose your game or somebody elses. You have to offer something that no one else does. If someone has to choose between your game and a similar game, you could be the loser. But if you create unique games, like Borderlands, which blended sci-fi and Western style shooting, then you could be the only choice.

“There was nothing to compare against us,” he said. “That’s what you need to do.”