Genies has raised $65 million to boost its avatar creator, which the company is touting for virtual identity and wearable digital goods.

Genies wants to become the virtual identity for people to express themselves in the digital world. It started with celebrities to capture moments for events such as album releases, song drops, and guest appearances, and it saw greater use over the pandemic. That has helped celebrities generate revenue even when they can’t go someplace in person. And now Genies is expanding this to wider groups of consumers in beta form.

Bond led the round, with participation from NEA, Breyer Capital, Tull Investment Group, NetEase, Dapper Labs, and Coinbase Ventures. Bond was started by Mary Meeker and other former Kleiner Perkins Digital Growth Fund leaders in 2018, and it has now raised more than $3.25 billion across two funds.

The money will be used to invest in the technology behind the Genie avatar system and to continue to build out the digital goods marketplace on Dapper Lab’s Flow platform. This will make it compatible with nonfungible tokens, or NFTs, which permit users to create uniquely identifiable digital items with the help of blockchain, the secure and transparent digital ledger behind cryptocurrencies such as Bitcoin.

“We’re going to offer tools so that a 6- to 16-year-old teen in high school can create their own digital wearable and goods collection and then release it in the marketplace and sell to the masses as well,” said Genies CEO Akash Nigam in an interview with GamesBeat. “The fact that we can allow anybody to sell digital goods and wearables is what gets me really excited.” 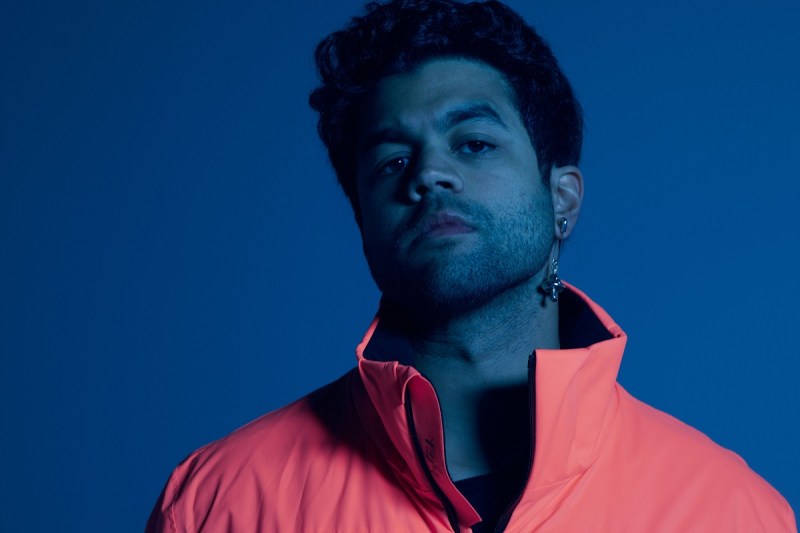 Above: Akash Nigam is CEO of Genies.

Dapper Labs is the team behind NBA Top Shot and CryptoKitties, which have generated hundreds of millions of dollars in NFT sales. A lot of people are excited about the nascent technology of NFTs — which has benefited from the craze stirred by Elon Musk‘s endorsement (and his wife/musician Grimes), Bitcoin breaking $50,000, GameStop shareholders’ grassroots revolt against Wall Street, and NBA Top Shot (listen to this ESPN podcast about it).

“It’s exciting for the whole category,” Nigam said. “The next big play is Genies is going to be powering the whole marketplace. And we announced our partnership with Warner Music Group. We’ve become the official avatar and digital events distributor for all of their talent underneath that umbrella.”

NFTs were always part of the Genies vision, but Nigam didn’t think they would go mainstream for a while. Now that they are getting closer to doing so, the company has begun to roll out its NFT strategy with art drops for celebrities like Mendes.

“The cool thing is that Genies isn’t an NFT company. And we’re also not a crypto company,” Nigam said. “It’s like we’ve been talking about the philosophies and concepts of NFTs for years, but we’ve been talking about it as a comparison to digital goods, on skins that you see in video games. And we’ve talked about unlimited capacity, exclusive capacity, and so forth. But never said the acronym NFT until we started to realize what was going on in the past year. We’ve had this consumer-first approach outside of the NFTs, and this is what we were doing this entire time anyways.” 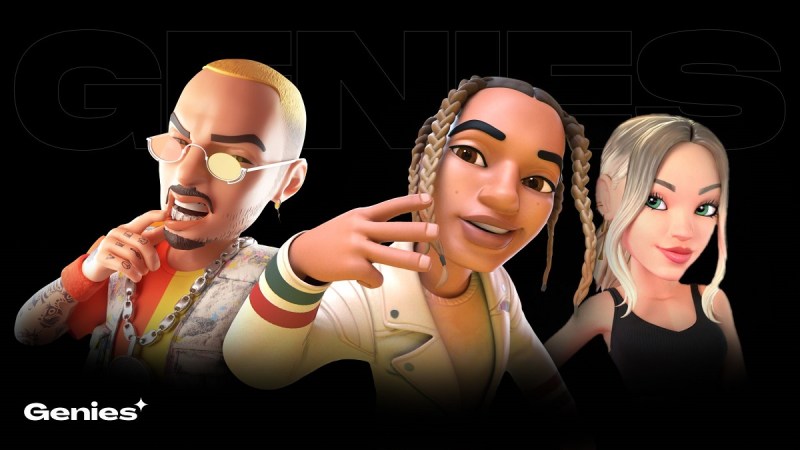 Later this year, Genies plans to roll out hundreds of partnerships where users can use their Genie to allow for a “virtual portable identity,” which users will be able to take with them across the internet. It recently partnered with Giphy, which has more than 700 million users who go to the search engine daily to find animated GIFs, or those silly moving images associated with internet memes and recorded in graphics interchange format (GIF).

To upload a Genie avatar into Giphy, users create a Genie in the Genies app and then use the deep link to connect them to Giphy. Once in the Giphy app, users can upload their Genies to their channel and use it throughout Giphy. Earlier, Genies had been used exclusively by celebrities, tastemakers, and influencers as a way to memorialize moments in the digital world. The company has thousands of celebrities using its Genies for album releases, song announcements, and more. Celebrities using Genies include Shawn Mendes, J.Lo, Offset, Rihanna, DJ Khaled, Justin Bieber, Cardi B, and J Balvin.

Now users can design custom avatars and buy digital good items in a brand and celebrity marketplace before using them via customized Giphy integration on platforms like Instagram, Facebook, and others. Users can create their own limited edition digital goods in the Genies marketplace as “drops.” The consumer experience includes creating a digital character of yourself from options including hairstyle, body type, clothing, fantastical accessories, and a growing list of things that could come from your imagination.

Nigam believes Genies avatars will make the metaverse possible, but not as a single virtual world. Rather, people can take their avatars and move from place to place in a distributed metaverse. He said the partnership with Giphy will help folks us Genies as cultural accessories for their digital selves and use them in digital communities where they already belong. 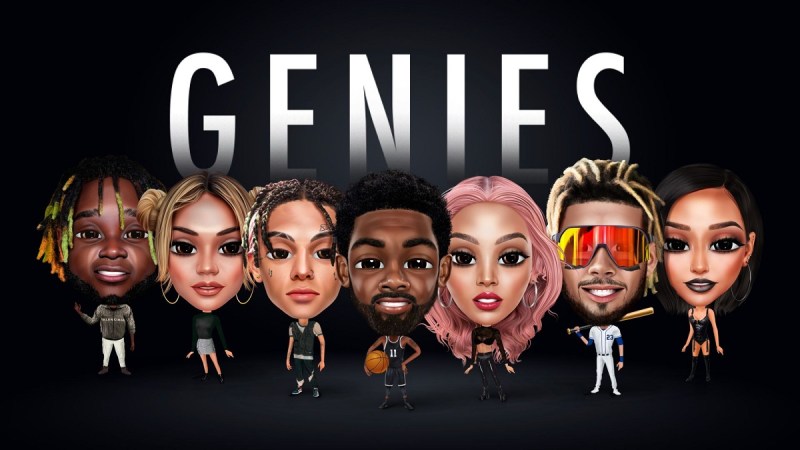 Above: Genies creates digital avatars for celebrities, influencers, and athletes.

Bond was formed a few years ago by Meeker and other former leaders at Silicon Valley venture capital firm Kleiner Perkins. Meeker will now join the Genies board of directors. “Mary Meeker is joining the board, which we’re very excited about,” Nigam said. “What closed the deal was Mary Meeker joining the board.”

This is another metaverse play by a big investor.

“The investment is based on what business really is right now and the potential for metaverse,” Nigam said. “If you look at how these partnerships and this traction is coming to a head, the potential is big.” 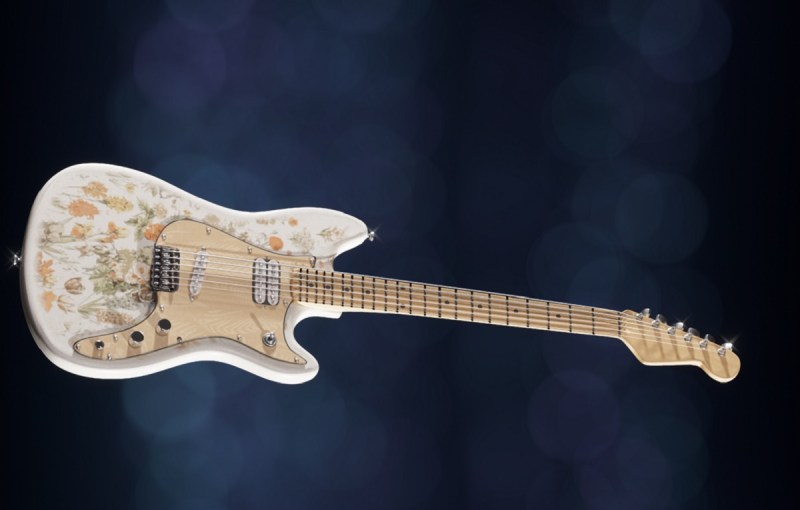 Above: Shawn Mendes sold this virtual guitar as a unique NFT collectible.

Nigam said that the business is based on celebrities driving the digital likeness marketplace and selling items to their fans, who in turn can express themselves with their own Genie avatars.

“When you put all that flywheel together, that’s like the new identity layer for the internet,” Nigam said. “We’re just stockpiling all of our talent and all their Genies, and their digital goods are wearable, so that when our marketplace with Dapper Labs goes live this summer, we’re going to be able to release everybody in volume in our own marketplace.”

Later in 2021, Genies will launch a secondary digital goods market, allowing consumers to buy, sell, and trade digital wearables via a partnership with Dapper Labs’ Flow — the blockchain for open worlds. Nigam sees the Genies avatar as a virtual portable identity that people can use wherever they travel across the internet. Examples of digital goods include a pair of shoes, a jacket, a fashion-inspired hot polka dot collection, a spirit animal creature head collection, a Bitcoin-inspired spacesuit, and a fantastical warrior outfit for Pride month. Most items are created without the limitations of the physical world and are meant to be fantastical to represent different personalities.

Other new and existing investors in this round include Camilla Cabello, Polychain, Amplo, Foundation Capital, Redsea Ventures, Hashkey, Shrug, A Capital, Tamarack Ventures, and Gaingels. Nigam started the company in 2017 and it has 60 employees. The company is hiring and it plans to make some executive hires as well as engineering hires.