Genvid’s technology will enable developers to make any multiplayer game (esports titles, virtual reality games, and massively multiplayer online games) more compelling to watch on streaming services, such as YouTube, said Jacob Navok, CEO of Genvid, in an interview with GamesBeat. It does so by adding interactivity to a stream, such as allowing a spectator to take control of camera views and even some gameplay elements while watching an esports match.

Makers Fund is a new $200 million fund for investments in the global interactive entertainment industry. The fund is led by Jay Chi, a former McKinsey consultant and long-time adviser for the game industry, and Michael Cheung, a former Tencent data scientist. Genvid’s existing investors, March Capital Partners and OCA Ventures.

“We’ll expand regionally in Europe and Japan,” said Navok. “We are active beyond the game industry and are working with the media industry, and we are working on interactivity with physical sports too.”

Genvid will use the money for the international expansion of the company’s existing pipeline of developers, expanding from esports into mobile, arcade and VR gaming across the world. 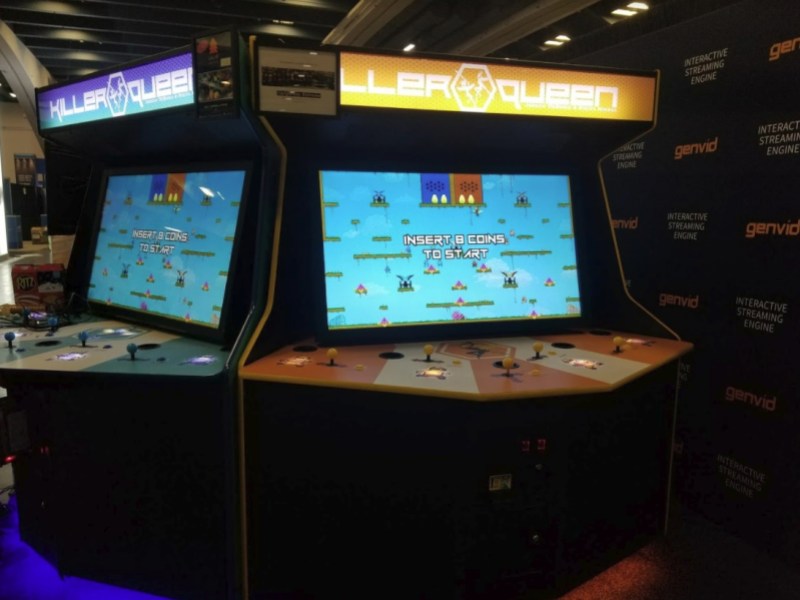 Above: Genvid is working with arcade game maker Bumblebear on Killer Queen.

The patented interactive streaming engine can go across platforms, from Twitch to YouTube, and across infrastructures and engines such as Amazon Web Services, Unreal and Unity.

“Streaming is one of the biggest growth engines for gaming; enabling two-way interaction between viewers and streamers is where the industry is headed, and we’re excited to partner with Genvid, who are leading that revolution,” said Chi of Makers Fund, in a statement.

At last week’s Game Developers Conference in San Francisco’s Moscone Center, Genvid showed publicly for the first time its integration for Counter-Strike: Global Offensive. The product was built in partnership with esports analytics company StatsHelix. I saw a demo of the tech, where you, as the spectator, can change elements of the user interface as if you were inside the game engine. Data visualization is synchronized to the precise frame that you are watching.

For instance, by pressing a key while watching a match, an overlay appeared on the screen. It was a real-time radar map that showed the position of every player on the map, color-coded by team. For spectators, that’s getting access to information the players can’t see. Broadcasters will have other features that can easily integrate a studio stream with a gameplay screen.

“This is part way to the dream of cloud gaming,” Navok said. “You don’t have CS:GO installed, but you have access to many of its elements through spectator mode.”

In another example, you can, as a viewer, cheer for people playing the popular arcade game Killer Queen and see data and learn about what’s happening in real-time in the game. Genvid is working with Killer Queen’s arcade developer Bumblebear.

Genvid is also working with Japanese virtual reality developer ActEvolve with a three-versus-three multiplayer VR game called Blitz Freak. In that game, viewers in the stream could drop bombs into the VR game in real-time.

Above: Genvid makesit easy for broadcasters to create esports shows.

Finally, Genvid has also shown off its Genvid Studio, a composition tool now available in the Genvid software development kit (SDK), which offers developers and broadcasters even more ways to enhance their livestreams in real-time. With the Genvid Studio developers can watch multiple source cameras live, and edit
them by mixing audio, video, effects, PiP and more.

Genvid has an expanded lineup of ongoing game integrations, ranging from indie to Triple-A titles, that will be announced soon, Navok said. Dozens of games are in various stages of integration.

One of the reasons that publishers are attracted to Genvid is that it can generate media revenue streams for those game publishers, who normally don’t generate revenue from media around their games.

“They can generate revenue directly from the streams that happen,” Navok said. “This is why Activision acquired MLG, to start to own and operate streams itself. You better believe that every major publisher in the world is looking at this space and how far toward media games are going to become in the future. We started this company on the thesis that games were going to become more like media, which people watch and consume, and media companies are going to move toward games and add more interactivity. The perfect middle point is interactive streams.”

Outside of games, Navok said he is working with a large media company. With this integration, you could watch a live baseball game on the web and see various kinds of interactive overlays in real-time, with data such as player information or interaction with other fans.

“We have a live match, overlay it and allow interactivity between different fans,” Navok said.

Navok founded Genvid in 2016 with a team that included the former technical and business leadership of Square Enix Holdings Co. Ltd. subsidiary Shinra Technologies, which shut down in January 2016. The company has 17 people, and it is hiring in a variety of territories.