Indie developer Christine Love‘s newest title Get in the Car, Loser! is a role-playing game that tells a queer coming-of-age story — all while on a free-wheeling road trip to take down a thousands-of-years-old evil. It’s colorful and lighthearted, and it will launch sometime later this year on PC.

Love is a veteran of the visual novel genre, and her previous work — like Ladykiller in a Bind, Digital: A Love Story, and Analogue: A Hate Story — have all played with that format. Get in the Car, Loser! is her first RPG, and it’s given her new mechanics to leverage while telling the story.

“The one thing visual novels are really good at is close-ups and conversations, right? It’s really good at showing you, here are how conversations break down. Here [are] people’s interiority. Here are people’s reactions,” said Love in a phone call with GamesBeat. “In a way, this is a story about the two things that visual novels are absolutely terrible about — like conveying a sense of place. There’s a big difference between these car scenes, where it’s all very cramped, and getting out in a roadside stop, so you can stretch your legs. Those are the sorts of feelings that a visual novel can’t really convey. It can’t convey that contrast because movement in a visual novel is inherently menu driven.”

The other thing that RPGs bring to the table is that they’re “action-driven storytelling.” Whereas visual novels excel at working through things via dialogue, an RPG is filled with battles and confrontations.

Get in the Car, Loser! follows protagonist Sam and her three friends who are students at a magical school. Somehow, everyone seems to be cool with an ancient horror just emerging out of nowhere and threatening to devastate the world, so the four decide to take matters into their own hands. They’re the only ones who are willing to do anything about it — so they jump into a car and head onto the road to confront the evil head on. 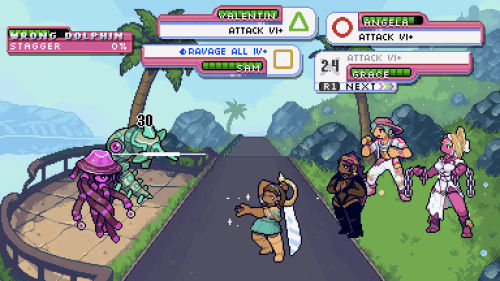 Above: Sam and her friends facing “problems you can solve by punching.”

“When we talk about ancient evils, we’re obviously not talking about real ancient evils. What we’re talking about is, you look at politics now and bad ideas that we thought were just taken for granted as bad and awful and evil, they’re now coming back in an awful way,” said Love. “Now, we really do have people saying, ‘You have to hear both sides of this,’ to the most heinous shit. I think part of what makes RPG storytelling great, and these big epic fantasy stories, is that you can just take that and very directly say, no, you really are supposed to be fighting evil. You don’t have to hear it out.”

Love wants to examine how people who won’t take a side can ultimately end up enabling nefarious forces. But that’s only a small part of Get in the Car, Loser!, which is more about Sam and her friends’ relationships and character growth. Instead of just presenting an epic arc of four heroes saving the world, it zooms in on those protagonists and shows that they’re real people who have complicated emotions and their own inner demons to contend with. Love describes it as a “gay mess” and “gay disaster” rather than a “gay romance.”

“I personally grew up on so many gay tragedies. I love that, but also, as a result, you grow up and you miss out on what would be very normal love stories, and, as a result, you feel like kind of a mess for it,” said Love. “I missed out, so now, I have to make double time to catch up. As a result, I feel like a lot of queer young adults feel like they need to make up for lost time. A lot of living in your 20s like you were hoping you would in your teens. That’s the archetypal gay disaster right there, the mess of trying to catch up.” 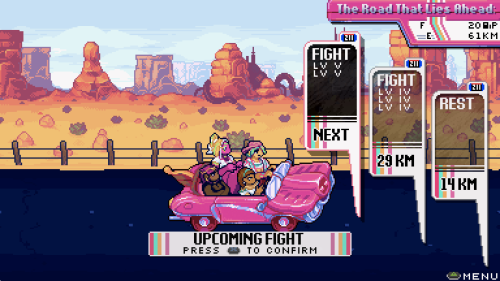 Above: Get in the Car, Loser! is a road trip through a fantasy version of America.

Sam, Grace, Valentin, and Angela will take on waves of baddies and apathetic townsfolk on their journey. And since they’re stuck in a car together, they’ll also have to sort their own issues out.

“Ultimately, this is still a pretty lighthearted story. I don’t think anyone is going to come away from this with any huge revelations about the nature of evil and the nature of enabling evil,” said Love. “But I do feel like it’s important to have that as one of our themes. When we talk about queer coming-of-age stories, it’s impossible to not address the fact that there’s a conflict in that. Part of why queer coming-of-age stories can be challenging is because often, the world does want to destroy you.

“This is not a super serious, super gritty, super detailed look about morality. I’ve done darker stories in the past, and I’ll probably return to that at some point. But right now, I think what I personally need is something that just tells me, ‘Oh, you can overcome evil without it being too much of a downer.’ Right now, in our current moment, I feel like I personally really need that.”