Can an American game studio make one of the best samurai video games ever? That’s the question for Sucker Punch as it develops Ghost of Tsushima, an action-adventure sword fighting game set during the 13th century Mongol invasion of Japan.

The last series Bellevue, Washington-based Sucker Punch worked on was Infamous, which starred a series of badass superhero Americans with plenty of attitude. But Chris Zimmerman, cofounder of Sucker Punch, believes his studio can meet that challenge of creating a samurai game that meets even Japanese tastes for authenticity.

We talked with Zimmerman in a group interview and in a small session with Ars Technica’s Kyle Orland at the Electronic Entertainment Expo (E3), the big game trade show in Los Angeles where Sony highlighted it as one of the top exclusives coming for the PlayStation 4. As you can see in the video below, the game has incredible graphics. It depicts Jin Sakai, the last samurai on the island of Tsushima as it faces the Mongol invasion in 1274. Based on what I’ve seen, this was one of my favorite games of E3.

Zimmerman went into a lot of detail about the research Sucker Punch has done to make sure the game lives up to expectations and how it will be crafted as a game with a universal story. Here’s an edited transcript of our interview. The game’s launch date hasn’t been set yet. 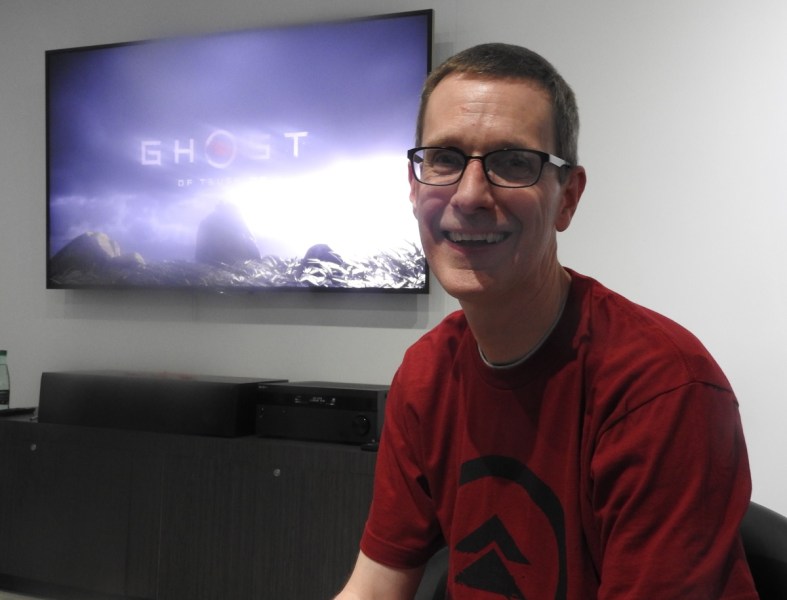 Chris Zimmerman: We’re trying to build a time machine here, a machine that takes you back to this place in time: Tsushima during the Mongol invasion in 1274. For me, this part of the demo is a particularly good time machine. If you go to Japan, one thing that’s inescapable is just how green the place is. Wherever you look, it’s a green wall, verdant, lush. You look at this and think, “Didn’t they get carried away with all the stuff here?” No, this is what Japan looks like. When we were there, I thought, “I hope we can capture this in the game,” and I think this part of the demo does a great job of that. When we show this to our Japanese friends at Sony, they say, “I feel like I’m at home.” That’s what we’re aiming for.

When we started working on this section of the game, working on the combat for Ghosts, one of the taglines we had — which this shot really captures — is “mud, blood, and steel.” That sense of groundedness in reality, trying to transport you to that place and time and make you feel what it meant to be this character fighting back against incredible odds. It’s important for us that, as you play through something like this, you’re transported. That means every fight is different. This is not canned, not just a big set piece. This is just the game running.

That’s the approach we took to building the demo we showed at the press conference. Not just, “Let’s build something for E3,” but, “Let’s take the game and show it.” That was important for us, that we capture what the game is about. The game is about mud, blood, and steel. It’s about being in a situation where these guys who have underestimated you have just learned that they shouldn’t have done that. It’s about tracking the flight of every speck of blood to see where it hits. It’s about tracking where the Mongols have gone so they have a realistic amount of blood on their costumes.

The short synopsis of that conversation — is anyone here fluent in Japanese? No? Then you don’t know whether I’m telling you the truth or not. Jin and Masuko have met here to find the monk, but they have a disagreement about the monk. Masuko is very angry with the monk. Through some stuff he’s done, he brought about the death of her family, and she thinks he should be dealt with harshly. Jin’s response is to say, “He’s helping us fight back against the Mongols. He’s an inspirational leader. We can’t abandon him. We need him.” 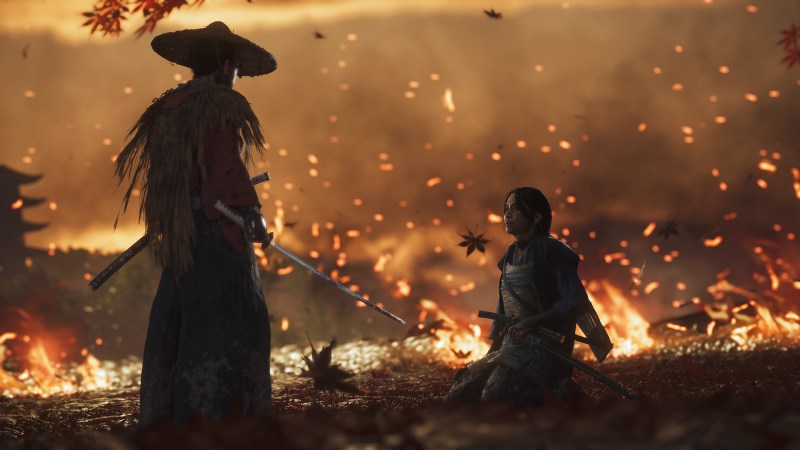 Above: Jin squares off with Masuko in Ghost of Tsushima.

Even though Masuko and Jin are on the same side, they don’t have the same ideas about how to deal with the invasion. That’s part of making a game that has nuance, that has a story you care about — realizing that not everyone is going to react the same way or take the same path to survival in these extreme circumstances. This shot just screams romance to me too, by the way. You have the stone steps, the green, all the lanterns, the temple we’re about to see.

This is an open world game. If you’re playing for real, you could easily decide that you’re just going to blast into the temple and deal with whatever you find inside. But Jin thinks, “I want to save the monk. Maybe I should check what’s going on, reconnoiter a little bit.” We noticed earlier a hole in the roof that he might be able to peer through. Here he’s going to use a grappling hook. Maybe he can go up on top to get a better look.

One thing you may be thinking is, “Wait, this is a samurai game, right?” It is. Jin is a samurai. But just being a samurai is not enough. Part of the story of the game is that Jin is discovering how everything he’s been taught, everything he’s tried to be, isn’t enough to deal with the Mongols. There are just too many of them. He’s forced to invent something beyond what he’s learned as a samurai, to use tactics like this. This is not honorable. This is not bushido. This is something else. This is him saying, “Well, if I’m going to save the monk, maybe I’ll take that guy first.”

If I move quickly I can take out all these guys before they can get to the monk. Ah, but there was a fourth guy he didn’t see. That guy blew the alarm. Now we need to move, because there are more Mongol reinforcements on the way. I need to free the monk and get out of here. You can see the specks of blood, which are actually the specks that hit him. We track the flight of those.

Jin says here, “If we fight each other, the Mongols win.” Masuko says, “They’ve already won.” She’s given up. Jin, even though he knows it’s the wrong thing to do, she’s left him with no choice. Masuko and Jin, their differences are to the point where the only thing they think they can do is have this very iconic duel. And there you have it, just a little bit of the story of Jin and Masuko.

Now, this is not the golden path. This is not the main storyline of the game. This is something off to the side. It’s emblematic of the game, but it’s not entirely about Jin’s story. It’s about the story of the people of the island and how they react. This is the intersection of Jin’s story and Masuko’s story. We didn’t want to give away the details of the golden path quite yet, so we decided to take a part that was about Jin’s relationship with Masuko and their story together. Just tell a little bit of that here without giving too much away. 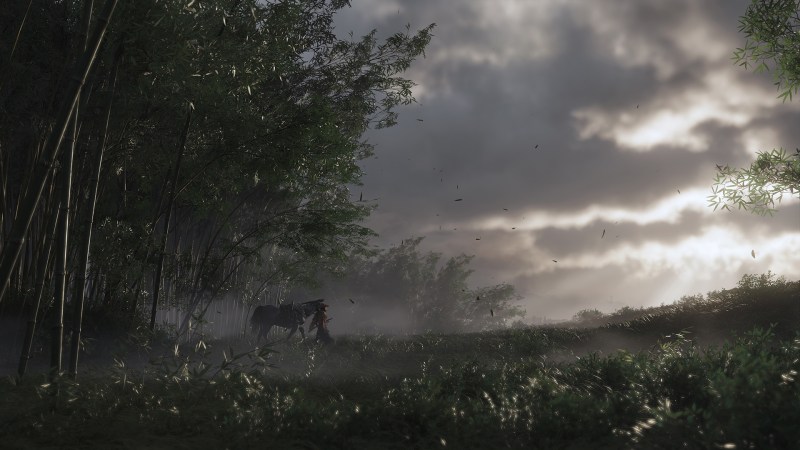 Above: The skies and landscape looks so realistic in Ghost of Tsushima.

Question: Can you talk about how the game controls? The combat looks very fluid. You’re dodging and counterattacking.

Zimmerman: How to talk about this? Let me talk about goals rather than getting into the details. The goal, again, it’s a time machine. We’re trying to make you feel what it’s like to be in this situation. We drew from a whole bunch of different points of inspiration, all with the goal of having this level of intensity that we really want you to feel when you’re holding three feet of sharp steel and you’re facing three people who want to kill you. That’s what we’re trying to get.

We started from a bunch of different places. We looked at HEMA, the historical martial arts reenactment enthusiasts. We obviously owe a big debt to samurai cinema. All kinds of stuff. All trying to figure out what would capture the essence of being a samurai.

One thing that was important to us was thinking about the character of the movement. If you watch how Jin moves, there’s something samurai about it. That’s because we have domain experts, experts in historical Japanese sword fighting techniques that we brought in to work with us and develop something that brings together that historical basis with the things we need to do to make it a video game.

Part of that is about having the sense of lethal precision to what the samurai is doing. He’s moving very intentionally. He’s staying balanced. There’s a purpose to every move he makes. Having our Japanese historical sword fighting expert with us in the mocap suit, helping capture this stuff, was really instrumental to that. You can see the sense of punctuated motion. You have this very iconic rhythm of pose, move, pose. If you watch samurai cinema you associate that with being a samurai.

Question: So if the player decides to mash buttons, that probably won’t work very well.

Zimmerman: That might be a strategy that will work for a while, but it won’t work for very long. With all games you want to make sure there’s a mix. Our goal with the combat is to make sure there’s a mix of pure empowerment feelings — there are 12 guys and you just go through them — all the way up to a one-on-one meaningful fight with another person who’s really your peer. And all points in between. We have a combat system that runs that whole gamut. The things you can do in your fight with Masuko are no different from the things you would do fighting some bandits. It’s just that she’s much harder to deal with, much more capable. That brings out more of what you can do.

Zimmerman: First of all, it’s great being part of Sony. That means we have support from people who really care about this. This is important to many people at Sony, that we get this right. We have a lot of support both from people in Japan and native Japanese people working in the states. We’re a multicultural studio as well, so that always helps. We have a strong Asian presence at Sucker Punch, and that helps too. There’s a sense that this is important and we need to get it right.

We’ve worked hard to make sure we’re bringing in appropriate people to help. Whether that’s talking about syncretism in Japanese religious life, or getting the details of a conversation right, or making sure the swords are accurate, it’s been great to assemble the team we have. It’s not just Sucker Punch. It’s everyone working with us to make sure this game is what it can be. It’s been a lot of fun.