Brianna Wu, the cofounder of game studio Giant Spacekat, said she has decided to pull her team out of the PAX East gaming convention because of specific ongoing death threats from supporters of GamerGate, the controversial group that claims to challenge game journalism ethics and has also led to harassment of female game developers.

“I’ve [had] very difficult conversations with my husband about standing up to GamerGate despite the death threats. We don’t have children, and we feel strongly enough about this issue to accept this risk. Our lives are our own; this is our choice. I cannot and will not make that choice for the people I work with. After talking to them, I made the decision to prioritize the safety of Giant Spacekat’s employees,” Wu wrote in a post. “Specifically, we have chosen to withdraw our presence from the PAX East 2015 Expo Hall due to a concern that in a crowd of such a volume expected at PAX, the safety of our team can not be guaranteed.”

She said the team voted on going to PAX East, and they decided they weren’t comfortable with it. Wu herself will go and participate in panels at the show in Boston, close to where Giant Spacekat is based.

Wu has been the most vocal opponent of GamerGate, and for that she said she has received more than 46 specific death threats in the past five months. She makes mobile games, such as last year’s sci-fi title Revolution 60, but she said in our recent interview that she spends at least a day each week talking to law enforcement about threats against her. “I’m doing everything I can to save my life except be silent,” she recently wrote. She has been labeled a “social justice warrior” and a “professional victim” by those she says are clinging to the old male-dominated game industry.

Wu is one of the handful game developers who has stood openly in opposition to GamerGate, a hashtag on Twitter that actor Adam Baldwin (best known for the sci-fi TV series Firefly) created in reaction to a controversy that started as a spat between lovers. GamerGate supporters virulently deny responsibility for death and rape threats against women and say they are leading a grassroots movement to address bad ethics in game journalism.

As described in her recent post, Wu’s life in the past five months has been hellish, and she has questioned if her career in gaming is worth it. The post included links to a “deranged video” created by a man who crashed his car after saying he was on his way to her house to kill her. She had to get a restraining order against him. She has also expressed her disappointment in law enforcement, which hasn’t arrested anyone associated with the 46 specific death threats, most of which have been made anonymously on Twitter. Wu’s address is known because she has been “doxxed,” or had her personal details posted on the Internet.

Sadly, the scenario for possible violence against the team at a tradeshow was raised as a possibility in the most recent episode of Law & Order: Special Victims Unit, “Intimidation Game.” Wu said she saw it and felt like the main character appeared to be an “amalgamation of me, Zoe Quinn, and Anita Sarkeesian, three of the primary targets of the hate group called GamerGate.” In that episode, members of a hate group target an employee of the main character’s game company, assaulting her in the rest room at the tradeshow.

That show did not call out GamerGate in particular, but it created a portrait of an industry where women aren’t safe if they create more inclusive games and are vocal about it. 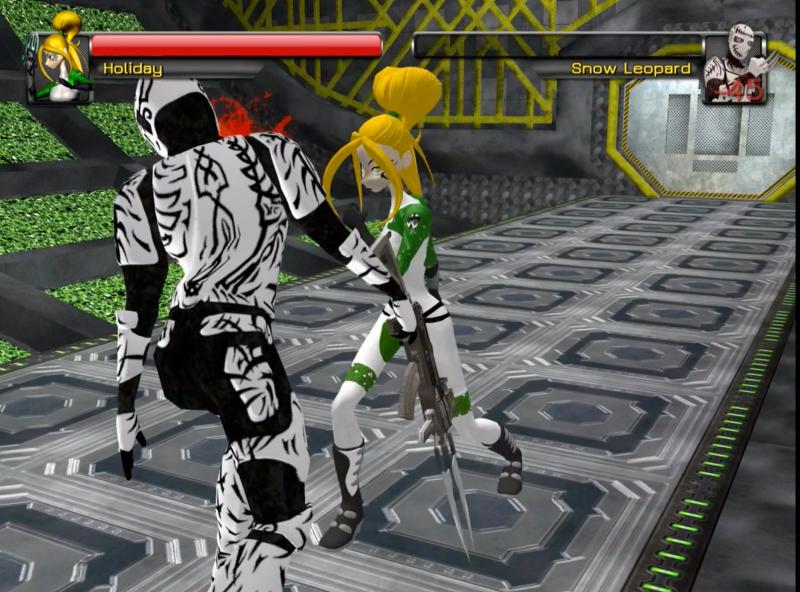 Above: Revolution 60 from developer Brianna Wu.

Here’s the full text of the statement from Giant Spacekat and Wu:

[UPDATE: This statement was originally written by our PR team. It has been updated by GSX head of development Brianna Wu.]

When Giant Spacekat was founded 4 years ago, speaking out on women in tech was the last thing on my mind. But, as I started working in games – I saw things here that I felt compelled to speak out against. In the last 5 months, this has led to unprecedented harassment by Gamergate.

Sadly, specific violent threats from Gamergate have threatened all we’ve accomplished as a studio. What started as contempt towards the inclusive Giant Spacekat ideals, has over time become a near constant barrage of unwarranted hatred, harassment, and threats.

Chances are, if you’re reading this blog, you know what a nightmare the last four months have been for me and my team.

GSX has continually attempted to get support from law enforcement with prosecuting the individuals behind explicit and detailed death threats. I’ve had 46 sent to me in the last 5 months. They often target me by name. The most frightening ones say who, what, where, why and when I will be murdered.

Despite the credibility of those threats, and despite attempts by one of these criminals to follow through on his violent threats, very little has been accomplished by law enforcement towards the goal of apprehending these criminals.

This brings us to PAX East.

I’ve have very difficult conversations with my husband about standing up to Gamergate, despite the death threats. We don’t have children, and we feel strongly enough about this issue to accept this risk. Our lives are our own, this is our choice.

I cannot and will not make that choice for the people I work with.

After talking to them, I made the decision to prioritize the safety of Giant Spacekat’s employees. Specifically, we have chosen to withdraw our presence from the Pax East 2015 Expo Hall, due to a concern that in a crowd of such a volume expected at Pax, the safety of our team can not be guaranteed.

Working a PAX show floor means interacting with thousands of strangers a day for three days. Given that two of our most serious threats have come right here in Massachusetts, that threat is something I must take seriously as a leader. In addition to threats of violence, my team is frightened of being harassed by Gamergate supporters.

We had a conversation as a team, and they voted. They do not feel comfortable with this. As their leader, I heard that and I’m going to respect it.

One of the things I struggle with every year in attending PAX East is writing a check to Penny Arcade. Mike Krahulik said himself that he is a bully, and I agree with that statement. The reason GSX has continued to attend PAX has specifically been because the Enforcers and PAX staff are awesome.

That said, I have personally been frustrated in trying to communicate with PAX about our security concerns. I called them on three occasions trying to talk to them about security concerns, and did not have my calls returned. I was able to attend both Arisia and Boskone, events taking place at the hotel next to PAX, with the help of their security teams. I’d hoped to come to a similar arrangement with PAX East.

PAX is a big event, and I’m certain it was not a conscious decision on their part to ignore us. After posting our decision to withdraw, PAX East did get in touch with me, and attending in 2016 will be a different story. I think the PAX Enforcers are awesome, and I think it’s a safe event in general for people.

But it doesn’t feel safe to us.

I’d love to show you guys Revolution 60 PC at PAX East. But, I’m not going to make my team feel unsafe just to get a few more eyeballs on my game. My team comes first, period.

I’ll still be taking press meetings at Pax East 2015 as best as I can. Those meetings can be set up or requested through our press email address: press@giantspacekat.com

I made a professional commitment to participate in PAX East panels and I will follow through on those commitments.

I think it speaks very poorly to the state of video games when threats and harassment preclude a team of women from showing their work at one of the industry’s most important events.