If you had quit Destiny, developer Bungie is giving you a good reason to come back.

Every weekend, a merchant named Xur shows up in Destiny to sell exotic weapons. This week, Xur is selling Gjallarhorn, one of the most coveted legendaries firearms in the game. You can finally buy it (rather than playing for hundreds of hours with the hope that you’ll get it from one of the randomized drops) and play with it if you have enough space bucks to afford it. But even if you can’t, you’re probably talking about it with your friends and on social media, and that is turning into a fair amount of free advertising for a game that is about to drop a $40 expansion next month.

Gjallarhorn is an overpowered rocket launcher in Destiny’s campaign mode. It’s so deadly that Bungie is planning to tune down its stats when it launches The Taken King next month. Many people consider it the best weapon you can get, but it frustrated players because Xur had only sold it once before in the first few weeks after the game’s debut. Back then, few understood its strength, and even fewer could afford it. 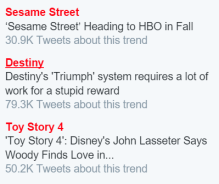 So, now that it’s finally on sale in Xur’s shop once again, it has turned today and this weekend into something of an event for Destiny players. People are buzzing about it so much that Gjallarhorn was trending earlier today on Twitter, and now Destiny itself is trending for many.

And the Twitter tracking site Topsy is showing a similar level of engagement. People have already sent messages to the “@DestinyTheGame” account more than 1,000 times today. That’s significantly higher than most days from the last month. The only exceptions were on days where Bungie announced news about The Taken King.

But this is really all about The Taken King. On September 15, Bungie will release that piece of downloadable content for $40. The studio has repeatedly referred to this as a “major expansion.” Essentially, this is Destiny 1.5, and it is the DLC equivalent of an annual sequel. And Bungie needs as many people playing Destiny as possible to maximize the sales of The Taken King. What better way to get gamers back into it than by letting them play with the best weapon?

Now, Bungie has also said that Xur’s inventory is random — and maybe that is true. But if it is fully random, then today proves that the studio doesn’t control one of its best marketing tools. We’re a month away from The Taken King, and Bungie is claiming that it can’t put Gjallarhorn up for sale to drum up excitement and engagement on purpose? That sounds like a problem.