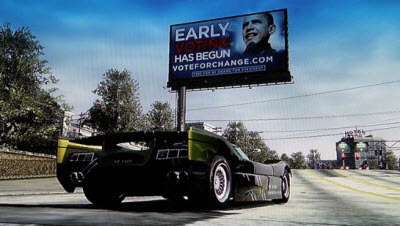 In North America, advertisers spent $1 billion in video game ads in 2010. That number is expected to grow to $2 billion by 2014. An example of the in-game ad was the Obama campaign ad in 2008 in the Burnout Paradise video game (pictured).

But Michael Goodman, an analyst at DFC and lead researcher for the report, said the video game medium is still underutilized when it comes to advertising. The amount of ad revenue flowing into video games pales in comparison to other media, considering that video games account for a huge share of leisure time activity. Video games ought to get a bigger share, Goodman said, based on the fact that they can be much more engaging.

“Video games have reached beyond adolescent males into a mainstream entertainment medium that touches every segment of the population,” said Goodman, in a statement. “Despite this, advertisers continue to underutilize video games as an advertising vehicle. This is slowly changing as more games go online.”

The biggest growth area is delivering ads around games, such as when Facebook runs ads in the borders around social games. Another big growth area is advergames, or games created to deliver an ad message. By 2016, advergames and around-game ads will account for 78 percent of game ad revenue, according to DFC.